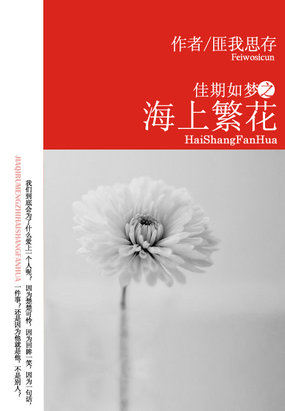 One entry per line
Fei Wo Si Cun
匪我思存

Everyone bears a love like a tattoo, leaving a permanent mark that cannot be obliterated. Zhenrong is Xiaosu’s tattoo. Xiaosu is Yuzheng’s tattoo. In this lifetime, nobody can replace the tattoo engraved upon one’s heart.

In order to seize headlines, willful entertainment reporter Du Xiaosu disguises herself as a nurse to slip into a hospital, where she fatefully encounters neurosurgeon Shao Zhenrong. When she meets Doctor Shao, the epitome of a true gentleman, she embarks on a relentless pursuit of his heart before finally winning his love.

Alas, happiness is as volatile as fireworks. It is impossible to fully grasp the feeling with your fingers before it slips away again. Just as they manage to receive everyone’s blessing, the appearance of Shao Zhenrong’s second brother Lei Yuzheng shatters all of Du Xiaosu’s hopes and dreams.

“I met her first.” The moment he speaks these words, Lei Yuzheng knows that he has truly fallen in love with Du Xiaosu. Only, they met at the wrong place at the wrong time. Due to the pain of a betrayal in her youth, Du Xiaosu allowed a singular moment of sorrow to get the better of her. Their first encounter was a mistake, as they were both intoxicated. Nevertheless, the sentiment of love has no concept of beginning, running endlessly deep. That senseless moment of passion rendered itself an eternal memory for Lei Yuzheng.

As for Du Xiaosu, the only one in her heart is the perfect and tender Shao Zhenrong. Little did she know that a mere moment of indulgence would plunge her into an emotional struggle between two worthy loves. In the end, Du Xiaosu must come to terms with the fallout. After all, you can deceive the world, but you cannot deceive your own heart.

Ultimately, this is a story about waiting. Du Xiaosu resolutely waits for Shao Zhenrong. Indeed, she may wait forever without turning back. Therefore, she may never know that behind her is someone who is waiting just as persistently for the moment she finally turns around.

The graceful descent of snowflakes silently vanishing against the surface of the sea: these ostensibly myriad flowers are nothing more than passing dreams, just like their love.

One entry per line
Variety Flowers at Seaside
佳期如梦之海上繁花
海上繁花

These are recommendation lists which contains Tears in Heaven. You should give them a visit if you're looking for similar novels to read. Alternatively, you can also create your own list.
More Lists >>>

So, this is the not an easy story. However, coming from Fei Wo Si Cun, aka the stepmother, aka adept of rapist-violent-male-psychotic-male-leads-who-treat-their-women-like-s***, this is is far from being the worst. Here, the male lead, Lei Yu Zheng, is almost decent (I repeat, almost : otherwise, this wouldn't be Fei Wo Si Cun). Unlike her other male leads, we can't help but feel that Lei Yu Zheng doesn't really have control over his actions but I'll come to that later. Why do I like this novel so much despite being from Fei Wo... more>> Si Cun who is far from being my favorite novelist despite a beautiful writing (I just disapprove too much of her overusing jerks as male leads) : many reasons. First, I think the whole story actually looks like something that could happen in real life. There's no such thing as deep revenge against someone, tragic misunderstanding : just the trials of life. The loss of a loved one, the feelings of guilt, despair, anger, the wish to sometimes give up, the bound we can develop with the most unexpected people, the sweetness, the fact that sometimes, life takes an unexpected turn. Therefore, we can't help but feel a connection to the story and the character. Then, I think that the two leads, have their charm, also because they're realistic : they have their flaws, their weaknesses, their qualities, their times of happiness, their times of sadness and sometimes, they're tempted to stop struggling but they go on nevertheless. Their charm come not only from their realistic substance but also from the fact that they're intense/mad enough to create an interesting story, without looking completely unrealistic or out of place. In these times when they lose their minds, this feels natural, like someone who's been refraining oneself his whole life and suddenly explodes, unable to hold it in anymore (I know, I went through that). Xiao Su is actually a quite ordinary woman who finds herself struck by trials of life, including a man who she doesn't know how to deal with (and not just because of his temper) and sometimes, she doesn't know how to face with all of this : nevertheless, I wouldn't say she's weak. She does her best with what she has and there are times when she can also say "No. I've had enough of your bulls*** now » to the male lead lead and get crazy when she needs to. I can also understand her inner struggle and her guilt towards the second part of the novel and why she doesn't accept the male lead : it feels very heartbreaking but very natural and we can't really blame her. Lei Yu Zheng is far from being perfect. But next to many male leads I've seen in Chinese novels, especially from Fei Wo Si Cun, he's far from being the worst. As I said, we can't help but feel doesn't really have control over his actions. He's someone usually very cold, very controlled, who's careful with his feelings : but when he gets caught in his growing love for Xiao Su, his inner struggle due to her status (his younger brother's woman), his despair to see her loving another man, and his misunderstandings over her feelings, he finds himself dealing with too many unknown feeling and therefore ends up acting in a way he shouldn't. But as I said, unlike many other male leads, he doesn't really do it knowingly, with the intent of hurting Xiao Su : and more importanly, he definitely realizes the gravity of his acts, feels remorse and does his best to amend. At some point, even if you blame him, you can't help but be touched by his growing devotion to Xiao Su, by the fact that he finds himself unable to give up on her, and by the sweetness between him and her. Because despite all the conflicts and struggle between these two, there is sweetness, even happiness, between them. I told you, this story looks like something that could happen in real life : you have times when you think you won't be able to get up and you have times you wish would last forever. Which brings me to the last reason why I like the novel so much : despite all the despair, all the bitterness, all the sadness, you can't help but feel hope in it. One thing that I usually don't like about Fei Wo Si Cun's novels is that her stories are sometimes (okay, very often) way too dark and hard. I get this is her signature, but sometimes, it feels like she means to overdo, as if she thinks "this is what my audience likes so I must do it as sad and dark as possible". This doesn't even feel like a story anymore : just a bunch of tragic events and characters. But maybe I'm biased because I have a preference towards happy stories. So you usually end up Fei Wo Si Cun's novels with tears on your cheeks : here, you finish it with a sweet, mocking smile, thinking of Xiao Su's future, knowing that someday, she won't be able to deny it anymore. And then, she'll finally get the happiness she deserves. <<less
1 Likes · Like Permalink | Report

I cannot believe that this novel is finally getting translated. I love tragedies, only the right ones though. This one has been on my radar from the very beginning and it's good to finally know what the story is about. I swear I have read the blurb more than 20 times already. I just hope this one isn't a dissapoinment. I still remember the time when I was so hyped when the drama was supposed to come, it's didn't and I remember being devastated. Googling the sh*t out of something with no... more>> answer at hand is shitty. I'd tell you that. Thankyou so much for giving this novel a try. Thankyou!!! I will update my comment when more chapters will star popping out I guess. <<less
0 Likes · Like Permalink | Report
Advertisements
Leave a Review (Guidelines)
You must be logged in to rate and post a review. Register an account to get started.