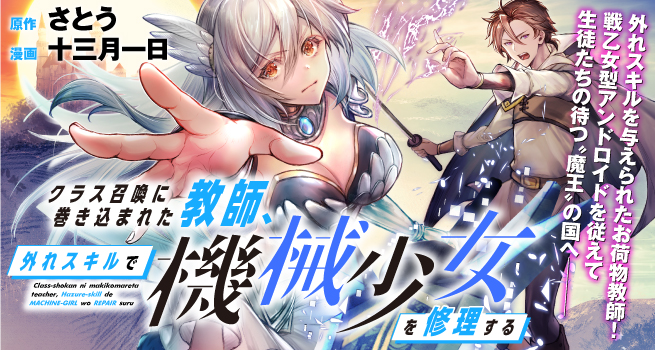 One entry per line
さとう

Status in Country of Origin. One entry per line
310 Chapters (Complete)

Aizawa Seiji, an ordinary teacher, finds himself transported to another world with his entire class.

Each of the students is given an ability called a “cheat,” but Seiji’s cheat is called “Repair,” which allows him to fix broken things and for some reason his power doesn’t work.

Seiji and his students went to an ancient ruin to train by killing monsters, but in order to protect the student from the sudden attack of a minotaur, Seiji acts recklessly and is left behind alone.

When Seiji confronts the minotaur prepared to die his cheat activates, and he repairs the “broken android maiden Brunnhilde” who suddenly appeared from the ancient ruins.

Brunnhilde, who has defeated the Minotaur with her overwhelming power and calls Seiji her master, and when they escape from the ruins, they find themselves in an unknown land.

Seiji takes Brunnhilde with him on an adventure through another world, in order to return to his students.

This is the story of a humble teacher and a mechanical girl who travel around fixing broken things.

These are recommendation lists which contains Teacher Caught up in Class Summoning, Repairs Mechanical Girl With Unorthodox Skills. You should give them a visit if you're looking for similar novels to read. Alternatively, you can also create your own list.
More Lists >>>

Not sure to say this, the novel is not bad and the translation is kinda good but the one that ruin everything is the MC. To be specific by just reading 13 chapters is already giving me a headache. As for regarding the MC, all could be said the MC is an idiot teacher. As much that the story progresses the MC is becoming cringy and his intelligence is questionable either going full ret*rd or developing to a decent one. As to proof of how idiotic the MC can be :
3 Likes · Like Permalink | Report
Advertisements
Leave a Review (Guidelines)
You must be logged in to rate and post a review. Register an account to get started.