Novel Updates
RegisterLogin
Theme
Search
Your changes has been saved.
Advertisements
Tale of an Edible Girl 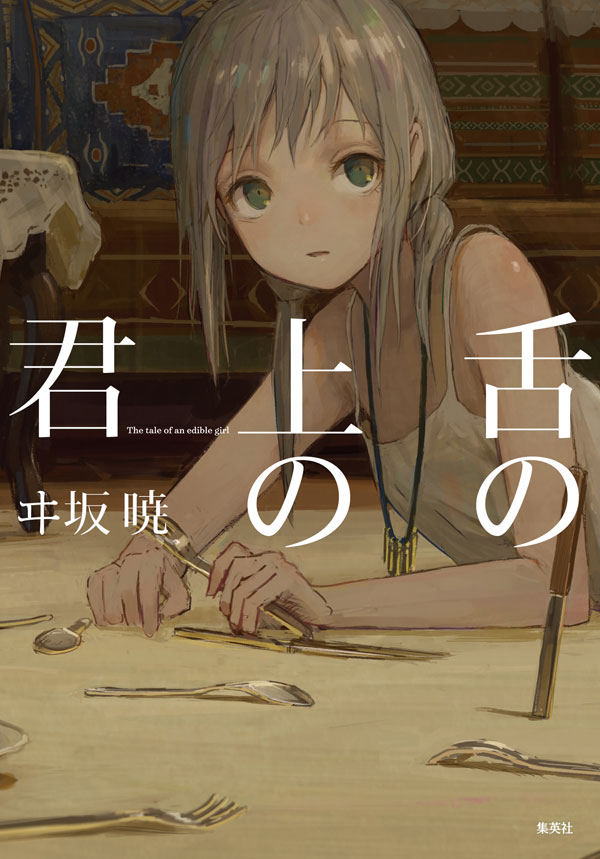 One entry per line
Shion
しおん

Status in Country of Origin. One entry per line
1 Volume

Kuria Kei, a chef who was endeavoring to open his first new restaurant in Tokyo found himself in a desert of another world after passing out in the middle of preparations. Rescued by Aisa, a girl who lives in the nearest village to the desert, he started his new life under the care of her family as he developed his cooking skills, and eventually discovered the disquieting food culture held by the citizens of that unfamiliar land.

One entry per line
Shita no ue no kimi
舌の上の君

Cooking with Wild Game (LN) (1)
Transmigrating With a Cleaver (1)
Oh no! After I Reincarnated, My Moms Became Son-cons! (1)
The Rebirth of the Malicious Empress of Military Lineage (1)
Mimizuku to Yoru no Ou (1)
Dokuhakihime to Hoshi no Ishi (1)

These are recommendation lists which contains Tale of an Edible Girl. You should give them a visit if you're looking for similar novels to read. Alternatively, you can also create your own list.
More Lists >>>

This novel is beautifully written and characters had a very much real reactions and personality. The author makes me think about things I normally won't think, the novel tackles about something that I don't think after all. ... more>>
Spoiler

this story revolves around the "Clear" who found himself in another world with only his chef skills at hand. The story progressed with Clear hesitating to do something that's against his morality and principles and worst of all, its legal and a custom in the country he currently resided in. He doesn't want to do it and doesn't want anyone else to do it either. And even if he did not do it she will still die. He just want to save the girl he loves though the girl doesn't like to be saved. The romance in here is good. Though Clear did not say that he loves her we can see that he really do and Aisa did too. The ending leaves a bitter taste but I can say that its quite refreshing since the ending is not what you normally read with jp isekai novels. I guess the ending is realistic if you think about it. Clear is not an OP protagonist and is struggling on what to do to save her. All he had is his chef skills and his sharp brain with no one to help him and there is no one that wholeheartedly agreed with his views. And what he against at is a custom, a tradition that is deeply rooted to its citizens.

[collapse]
If you don't mind tragedy, why not give it a try? <<less
2 Likes · Like Permalink | Report
Leave a Review (Guidelines)
You must be logged in to rate and post a review. Register an account to get started.

The Game of a Blood Mage

My Collection Of Short Stories To...