Novel Updates
RegisterLogin
Theme
Search
Your changes has been saved.
Taking Care of My Husband in a Tragic Novel

Home >
Novel >
Taking Care of My Husband in a Tragic Novel 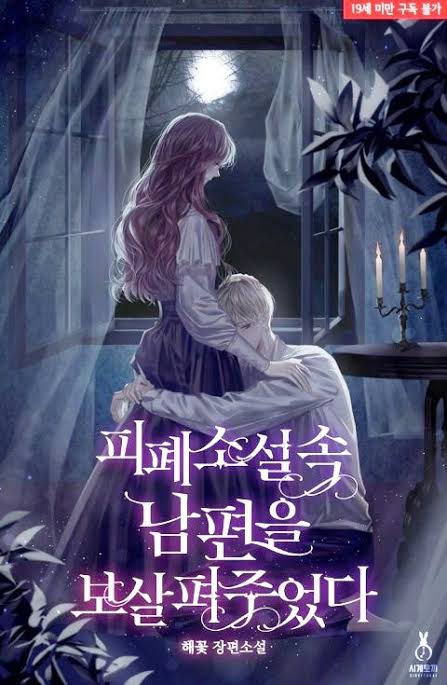 One entry per line
해꽃

Status in Country of Origin. One entry per line
3 Volumes (Complete)

In a tragic novel, I possessed the body of Astelle Heines, who died while grooming her 13-year-old husband to her own taste.

The ugly lady of Heines.

A noble lady who played house with a child because she had no other man to marry.

That was Astelle’s reputation within high society.

But they didn’t know—

Why Astelle’s heart would ache every time she saw Bleon and the reason why Bleon was so racked with anxiety at the thought of Astelle leaving.

After I became Astelle, I experienced true love like never before.

“Please don’t leave me… I cannot live without my wife.”

I will make you happy. So don’t leave me.

“Then, please don’t throw me away even if I’m worse than garbage… please…”

I love you. You were the only light in my exhausting and miserable life.

Bleon, it seems like we’re walking side by side in an unreachable parallel world.

So you can go find your place now.

These are recommendation lists which contains Taking Care of My Husband in a Tragic Novel. You should give them a visit if you're looking for similar novels to read. Alternatively, you can also create your own list.
More Lists >>>

Istg this is a disappointment. Not recomended at all, anyway I hate philia (personal opinion, don't come after me duh but I hate her for sure)
Nothing resolved nicely, leaving plot holes that bothered me to death and my dissapointment on ML grew like a mountain. I wasted my duckin 3 hours reading it and I regret it sm, bring me back my time ugh. Bits of MAJOR spoiler the reason why I don't like it
... more>>
Spoiler

ML have been druged for years and suddenly have smex with Philia (in 1st tl) he mistook her for FL, and philia willing to do it for tReAtmEnt or whatever it is which I found disgusting since I despise cheater so much or homewrecer sht. I know the reason it's bc the drugs and ML mistook philia over FL, but I just hate it the way philia willing to do it or ML still doing it despite FL know about it (at this point in 1st tl they were divorced and FL were gone somewhere, but ML STILL have smex with philia to relive his s*x drive. I know it was bc of drugs but still I feel so bitter that my dissapointment on him reach its peak.

And oh yea, don't say that philia do this for ML sake for him to be healed, you have to KNOW that both ML and Astela is sick, obsessive to eachother.
There's a big spoilers here

Astela sure as heck is sick, but she didn't start abusing ML when he's a ten y.o. She's kind and gentle towards ML first, AND astella didnt show interest on ML in romantic way, she thought on him as little bro but still obsessive towards him. ML who is the one make his way First so Astella will notice him.

back on ML— he falls hard on her, he even hope FL look at him in romantic sexual way after he got his first wet dream when he's 13. And his hopes came true! It was when he turned 18 (srry if I'm wrong) that Astella started using drugs on him bc of her inferiority complex and she's afraid ML will leave him someday bc of rumors circulating that ML will throw Her away. And yeah, ML knows about The drugs nd pretty sure he want it too.

And don't get me wrong, I Too hate what Astella do to ML

* 2nd tl ML go to war and suddenly missing with Philia, FL pregnant and received the news her husband missing with the healer (philia) and faint then lost her baby.
* in 2nd tl they were happy as if nothing happend, there's no mention about philia in the ending which makes me upset especially when she act like she's close to ML really sickening me tbh. Idk I JUST hate philia period. Don't come after me Since it's my opinion on her.

Conclusion = Yes it's grooming.
[collapse]
No resolution or whatsoever, the plot is bland, character is bland, nothing special. <<less

I enjoyed the plot, its new to me. Even though, I didn't like the situation she reincarnated in and when she said there is 13 yo age gap between them. I don't like those parts they are unrealistic. Plus she just came out shocking him, poor ml. She is too blunt. But I still look forward to the next chapters and also smut. Hehe!😅... more>> Also please update more frequently dear translator.🥺 I don't have patience but I like your translation. It's smooth and easy, I gave two stars just for thanking your work. 🥰😘 Cheer up. <<less
7 Likes · Like Permalink | Report

i know that the female lead isn't the previous owner but dang.. WTF THIS IS STILL A STORY OF A PREDATOR AND HER VICTIM. Why are u romanticizing this?? She might be different but she's still using the predecessor's body. Oml. Tr*sh. Had to stop at chapter 4.
6 Likes · Like Permalink | Report

i accidentally rated it idk how to remove it im very sorry but for now I wont actually rate it yet because theres like three chapters and honestly this is like out of my comfort zone - tragedy, smut but so far so good actually, I love how FL treats ml the only thing that irks me is the age gap??? I really dont know but she said that her real age is close to the ML but the fact that the og body that FL just took over groomed a child... more>> disgusts me, really but based on the description, there seems like a reason behind it idk but we'll see!! Im intrigued :) <<less
6 Likes · Like Permalink | Report

I wonder why did there is no more update? Tbh, this novel is good. A new plot to me. I love the storyline... Please keep update. This is a great novel!
1 Likes · Like Permalink | Report
Leave a Review (Guidelines)
You must be logged in to rate and post a review. Register an account to get started.