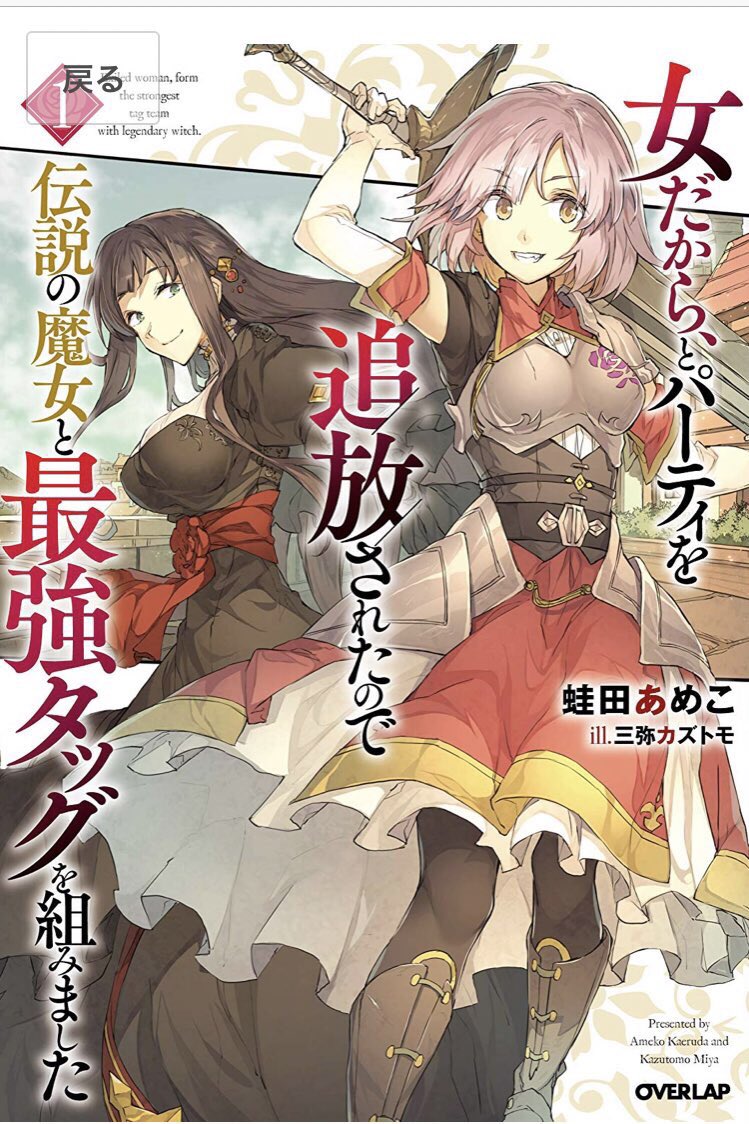 One entry per line
Miya Kazutomo

“You’re exiled from this party, you’re a woman after all.”

“Women really should be recovery magic ‘healers’, after all. A sorcerer’s a bit…”

Putting in enough effort to spill blood, the female adventurer named Tanya who had finally reached the highest class of sorcery was one day abruptly told “because you’re a woman” as the reason to be kicked from her adventurer party.

“However, if you’re a sorcerer our characters will overlap so be a magic swordsman. The level will be maxed from the beginning.”

“Seriously!?!?!? (while pulverizing a last-boss-class dragon)”

Huh? The adventurer school’s examination? Since I was a woman, points were deducted across the board (fumes).

One entry per line
Onna dakara, to Party wo Tsuihou Sareta node Densetsu no Majo to Saikyou Tag wo Kumimashita!
Sexiled!!
Sexiled: My S*xist Party Leader Kicked Me Out, So I Teamed Up With a Mythical Sorceress!
女だから、とパーティを追放されたので伝説の魔女と最強タッグを組みました！

These are recommendation lists which contains Tag-Team. You should give them a visit if you're looking for similar novels to read. Alternatively, you can also create your own list.
More Lists >>>

There are generally 2 types of feminist stories. One kind (the good kind) elevates women and shows that they can do anything. The message of those stories is that you shouldn't discriminate. The second type (the bad ones) puts down men and blames them for all of women's problems. They constantly discriminate against men and seem to be completely unaware they're doing it.... more>> This story is the second kind. But before we get too deep into that, lets talk about the good stuff. The art is really nice. It doesn't look like the generic anime style you see everywhere. It still looks pretty anime, but it's got a more pastel vibe to it which is nice and suits the story. The main characters are unique from each other and have actual backstories that matter to the story. They get some actual character development even if it can be summed up in 1 sentence. Also, this is the first spell you hear cast.
Spoiler

[collapse]
Now on to the bad things. It's kind of hard to talk about any specific subject like worldbuidling or plot separate from the feminism because it's so tightly intertwined. There are some plot holes but they're not that serious and aren't worth spoiling to talk about. Like I said, this story spends all it's time blaming men for the character's problems (they're all girls). The characters say that the message is "women can do anything" but the author waste most of the words pushing down men. You could take out about 1/3 of the chapters and the story would be completely unaffected and you'd still get a good idea of how misogynist the world is. For example near the beginning of vol. 2 the characters go out of their way to complain about how men are the professional chefs in the world despite everyone saying they want food like their mother made. There's no side story about it, there's no resolution or anything resembling a plotline. They just do interrupt the story out of no where and move on. And this constantly, randomly happens. This isn't in spoilers because there's nothing to spoil. A lot of the stuff doesn't even make sense if you take the time to think about it, but it's not worth going into detail. If I did this review would never end. It's clear that this world wasn't built to be interesting; instead the author seemed to come up with single case of discrimination they could come up with and molded the world around that. It would be fine if the world just happened to be misogynistic, because medieval times weren't exactly the best for women, but the author goes out of their way to make sure you know that men are the problem. This novel commits the sin of making it an "us vs them" issue. "Us" obviously being women and "them" being men. The problem is that in every issue, whether it's sexism, racism, etc. It's never that simple. There's also some people on the other side who side with you, but in this novel it's not the case. That's a dangerous mentality to take. There isn't a single named man who is against misogyny. All of them are sexist bad guys. It takes until the end of vol. 2 for a single explicit instance of a man being nice to the girls. And he doesn't even have a name. It's just throwaway guy to say something so the author can pretend they didn't spend the last 2 volumes telling people that every single man is a sexist pig. You'd think that at least some of the male children they play with would have names so that they could raise the next generation of men to not be sexist. But not only aren't they named, it's never even explicitly stated that any of the children are boys. So there's a wasted opportunity. But even worse than just blaming men for everything, the author does things they would definitely find abhorrent if the roles were reversed. For example
Spoiler

near the beginning of vol. 2 again the girls are running a food stall at a festival. A man passing by says that the girls should be in bikinis. So one of the girls cuts the clothes he's wearing up so that it looks like a bikini.

[collapse]
While this was fine for a comedic moment (I mean, it wasn't even that funny but neither is the rest of the novel) it doesn't jibe well in a feminist story. If it was the man doing it to one of the girls he definitely been the bad guy. But it's okay for a girl to do that? You could try to claim that the author was saying it's fine because the girls were getting revenge for something the guy did, but that's literally the motivation of the main bad guy. Well, kind of. The author is kind of wish washy about that.
Spoiler

[collapse]
I could go on and on about the problems with what this author thinks is feminism, but the point is that they discriminate against men even though the message in my opinion should be that you shouldn't discriminate. Even if you somehow ignore all the feminism that the author shoves in your face it's hard to give the story more than a 3. The story is average at best and the writing isn't anything exceptional. While the characters are relatively good, they don't get enough time to shine because they have to constantly be complaining about the sexist society they live in. All in all, it's hard to recommend this story to anyone. <<less
37 Likes · Like Permalink | Report

I like this story! It's a nice revenge tale with a cute romance. But I gotta say, the butthurt reactions are hilarious but tone deaf. Saying sh*t like "this is misandrist" when all of these obstacles are things Japanese women face in modern day to day life. Getting fired because it's assumed they're less capable and should be a baby factory housewife? Getting rejected from prestigious institutions specifically because of their gender, to the point that male test scores are artificially inflated and women's are deflated? Lots of mol*station and sexual... more>> harassment? All are pretty much ubiquitous in Japan. This isn't unrealistic at all, but a fantasy analogue of real social issues Japanese women face. You think this story is unfair to men? Imagine living as a woman in Japan! Guys don't have any problem with sexist fantasy worlds when the female characters don't fight back against it. Game of Thrones, Goblin Slayer, Shield Hero, etc. Constant r*pe and racoon s*aves you RAISE FROM CHILDHOOD are totally cool and even hot. But if the women explicitly call it out then they get their feelings hurt. They're mad because there isn't a Kirito-style white knight telling women that they're actually the ones oppressing themselves, but don't worry, you can join his all-woman harem! Affirmative action is fine if it's for his dick! <<less
7 Likes · Like Permalink | Report

It's like a really poorly written yuri novel without the yuri and 200% more "all men are evil". You can't indulge in this novel, as it's constantly hitting you over the head with a brick. There's other novels that have handled this topic much, MUCH better. Some more serious, some more light hearted. This novel is just a mess of poorly written ideas and lackluster characters.
5 Likes · Like Permalink | Report

So very bad. I'm all for stories with strong females and the enodrsment of gender equality, but this is just very poorly written. The two main characters are actually not bad, they don't make sense in context, but as stand alone charcters they are quite nice. They are overpowerd, however that is part of the draw for the genre, and they aren't perfect so human interaction can occur and have effect. Another good aspect is the art. The rest is just crap. I read the officialy translated light novel so the... more>> translation is fine. Minor spoilers ahead (and a rant, it is a rant) :
Spoiler
[collapse]
<<less
4 Likes · Like Permalink | Report
Advertisements
Leave a Review (Guidelines)
You must be logged in to rate and post a review. Register an account to get started.

Vector Control in the Multiverse
Advertisements