Novel Updates
RegisterLogin
Theme
Search
Your changes has been saved.
Survive As the Villain’s Cousin 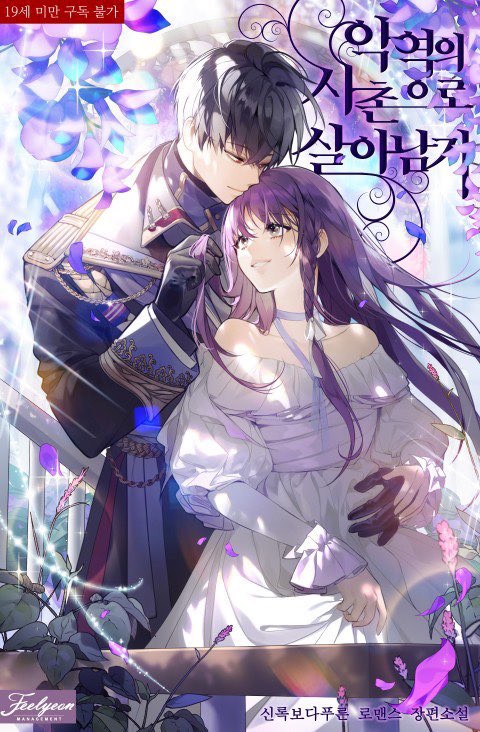 One entry per line
신록보다푸른

One entry per line
SUKJA

Status in Country of Origin. One entry per line
124 Chapters (Complete)

The criminal who appeared in the novel and turned the villain evil!

Who would’ve known I would be reincarnated as her?

I took a deep sigh and made a resolution.

‘Let’s raise the twins with love to prevent them from turning evil!’

However, after seeing the twins, the villains of this novel, sleeping peacefully in a cradle, I felt healed.

‘Alright. No matter what, let’s all live in the Duke’s house together..’

I won’t care about the novel, and get along with the twins, but the sub-male lead who shouldn’t have gotten involved is starting to get obsessed with me!

I was so fascinated by his eyes that I couldn’t answer right away.

“Is it because I’m cursed?”

I had to say that it wasn’t, but strangely, no sound came out of my mouth.

It was true I avoided you, but it was for your sake.

“Are you running away from me? You were the one who showed me the light, and now you’re scared?”

Although he spoke politely, his eyes were that of a beast who was looking for his prey.

I instinctively felt that he wasn’t putting up a pretense like usual. He was being serious. The feelings that came from my heart were hitting me honestly.

“Please, please, don’t take another step back. I don’t know how much more I can take.”

Ah. Where did I go wrong?

I just tried to stop the villain from turning evil, but why did the sub-male lead become black?

These are recommendation lists which contains Survive As the Villain’s Cousin. You should give them a visit if you're looking for similar novels to read. Alternatively, you can also create your own list.
More Lists >>>

Still too new to get an accurate reading on but with a bubblegum sweet reincarnated ex-kindergarten teacher as the FL it's not too surprising that the ML is going to probably be the dark possessive yandere type. I got a good vibe off it but my rating is subject to change.
4 Likes · Like Permalink | Report

Its okay but the Holy Mary attitute, willful blindness and passiviness of the FL got on my nerves, I had to recheck this wasnt a Japanese novel since it sure felt like one. ... more>>
Spoiler

The og!Sernia was actually inocent and was cursed into insanity and DEATH by the Nanny because her existance stopped the Nanny from having her cake and eating it too (keeping her cushy job and having her child in the mansion with her) and when she tried to curse the FL too but was foiled by the butterfly effect the FL begged the Duke for the right to judge her and she just fired her arggghhh, before the FL keeps going on and on about how it was og!sernia fault that the twins where ruined and all the deaths caused by them, but yet when the true culprit was there she let her off freely, she released into the world the kind of person that will curse a blameless CHILD into insanity and even worse that woman was completly unrepentant, was only sorry she did not succed and was discovered and did not came across as particulary mentaly stable, what the heck FL?! I actually feel sorry for her child that now will have her under the same roof (I actually really hope the Duke had her killed or imprisoned behind the FL back)

Later on inmediatly forgiving the girl that over some jeaolusy endagered her life and made her relive her death trauma was more understanble since at least that one confessed on her own and was truly regretful since she intended to humillate her not kill her, but still this its setting a very annoying pattern

[collapse]
I am still going to keep reading anyway when it gets updated XD since its still so early on the novel. <<less
2 Likes · Like Permalink | Report

It's still too early to say anything about the story line but the translation is very good and I'm pleased to see this doesn't drag out the childhood years.
Spoiler

The first 5 chapters are when our MC and her cousins are small children. The first few chapters just build on the relationship between the cousins, duke and our MC and touch on some key events before adulthood. By middle of chapter 5, we get to their teens.

Giving it a high score because the negativity w/o reasoning felt unwarranted at this early stage. Will revise on review on a later date. Story so far is sweet, but cliché: the typical kind of cannon fodder character that managed to be in important figures good graces and receives huge indulgence and protection from said important figures. It's merely the beginning so that's all there's to it.
2 Likes · Like Permalink | Report
Leave a Review (Guidelines)
You must be logged in to rate and post a review. Register an account to get started.