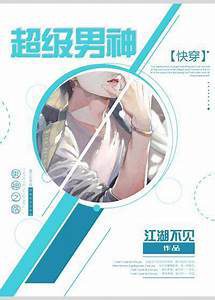 One entry per line
江湖不见

Status in Country of Origin. One entry per line
442 (Complete)

Xiao Qingrong had no mother and no father. With his own ability, he climbed to the peak of life, then encountered a system who could shuttle him across time and space. “Do you want to become a male god?”

One entry per line
超级男神[快穿]

These are recommendation lists which contains Super Male God System. You should give them a visit if you're looking for similar novels to read. Alternatively, you can also create your own list.
More Lists >>>

It could be better. It could also be worse. The arcs are too short for my liking and the completion of each one feels rushed but the concepts are still interesting. The MC is a psychopath and there's basically no romance. The system still thinks his host is kind though and that's pretty funny.
1 Likes · Like Permalink | Report

I absolutely loved it. No romance, just a twisted smart protagonist. Bloody, he like kills or injuries someone every other chapter lol.
0 Likes · Like Permalink | Report

A QT that isn't female protagonist or BL? Sign me up. Seems to be a power fantasy as far as I can see, but the protagonist isn't super excessive. EDIT: Never mind that I really like the translator as well. Good translations, paired up with an update schedule of 1 chapter per day? Yes please. Nice as a light read, because you know what, the translator actually uploads daily. So rare.
3 Likes · Like Permalink | Report

I thought I should write a review because currently there is none and like if someone wanted to read this but dont know if they should they would usually see the reviews. So here is my review (this is my first time doing a proper review). Ill put the spoiler thing if theres a spoiler. So first the translation looks pretty good to me at least theres no misspelled words that are noticable, so I dont think you have to worry about that unless you have good vision or care about... more>> stuff like that. The story line is pretty interesting judging from the description. At first the description confused me because of how it was written but still somehow got my interest. So far there are only three chapters as you can see. But these three chapters are the best I've read so far. The story line is great. There's the same transmigration cliche that other novels have but its ilso somewhat unique compared to them. Like I've heard about a male god system ever (which is probably the same for any other system. I think you should five it a try. More information about it in the spoiler thing since it includes spoilers.
Spoiler

in one the chapters I real liked how he killed that fat dude who tried to touch the MC without his consent. I also like how the old dude didnt feel the need to be arrogant and just let the MC sit with him (tho the MC didnt didnt care), I feel like he'll be like a grandpa to the mc

[collapse]
I hope there isnt romance in this cause it'll just make it tr*sh. I dont feel like romance is suitable with the storyline (._.). <<less
3 Likes · Like Permalink | Report

This is the most interesting quick transmigration story I have ever read. It was completely different from other transmigration/ system stories with same cliche arcs. First, the protagonist was somewhat of a psycho but I loved it. He had multiple personalities due to his traumatic past. These personalities were developed to protect himself. Second, the MC's method of revenge was to use a scalpel. No need to talk too much just stab them. The face slapping in my opinion was not enough in some arcs. The MC just developed himself and... more>> the villains usually ended up destroying themselves due to bad decisions.
Spoiler

There were some arcs which almost made me cry. They touched upon the darkest aspects of the society like how r*pe cases and child molestation is handled in the society. In my opinion these two were the best arcs. The MC helped take revenge for the girl who was raped and was not given justice because the perpetrators were from the upper class and the girl was poor. In this arc I really wanted to applaud the MC for the revenge he took. It was perfect.

One got his thing cut off, the second got AIDS, the third got rapist carved onto his face and the fourth was bedridden for life.

In the arc Extra life I wish I could have protected the original host. I felt so bad for him. His whole life was just awful. He was 13. His parents didn't love him but he tried so hard for their approval. When he got molested nobody believed him. The poor thing was tortured and committed suicide in hopes his death will make somebody listen but the parents just received money from the pedo and used the money for their other kids and his death was just covered up.

[collapse]
I liked all the personalities of the MC especially Dr. Xiao and RongRong were my favourite. There was no romance which in my opinion is good because the romance would have totally ruined the story. There was one arc in which RongRong appeared where I hopped something would happen between the MC and Tang guy (was hoping for a little BL) but in the end nothing happened. <<less
2 Likes · Like Permalink | Report

A novel with new idea in QT genre, It was the first time I saw this kind of refreshing main plot in this genre. ... more>>
Spoiler

[collapse]
I thought it would be a quick read but the mysteries around MC totally got me hooked and made me want to read all chapters fast. Also MC has his unique ways to faceslap the scums and unlike other MCs he doesn't only uses his brain to deal with the plots:
Spoiler

I like how he uses scalp in some arcs to punish the people who deserve it, he not only uses his mind but also uses physical approach with his scalp

[collapse]
The ending was satisfying to me, And it was really surprising too.
Spoiler

[collapse]
Recommend for readers who like QT genre. It really has a new main plot worth reading. <<less
2 Likes · Like Permalink | Report

Okay this story is super interesting! I have never seen a QT like this! Why? because the MC is a legitimate psycho! and I’m not joking. MC is initially rather confronting since he’s very uh, gory? His favorite weapon is the scalpel. Anyway, he’s also a genius, the type that if he wants to learn something he will do his best to learn it (though he favors dissections and the medical aspect more) and the way he solves things is very different to what one usually expects.
... more>>
Spoiler

Im still not good at english grammar but thank god I can understand using google translate :') I liked this novel so much, I wanted more chapters but im happy with the ending. Already miss Qingrong and 618. Each arc was interesting, my favorite was... probably Perfect Crime (? and the last one. There is no romance btw.
Spoiler

MC has multiple personalities that were born at difficult times of his life. Some appear instead of him, or accompany him during that life, only in the last one they meet.

This is really f*cking interesting. The MC has multiple personalities and is an absolute maniac. I love him I just didn't really like Shadow's arc. There was too much flirting for the impression I already had of the character. I just can't see the appeal. Overall, marvellous.
0 Likes · Like Permalink | Report

I really liked this novel, it's very different from what most QT novels has to offer which made for a refreshing read. The fact that the MC had multiple personalities made the story more interesting and like most people here my favorite was Shadow.
0 Likes · Like Permalink | Report

I have read it upto c 14. And boy I am hooked. Its epic. It's nothing cliche. Its totally fresh, the translation at first chapters are ok but it gradually gets better. You can see the improvemnt. I am going to contunue reading it. Its definitely worth a read. New me Damn this novel is epic this novel is the god of all the system novels. Headsoff to author's Imagination
0 Likes · Like Permalink | Report

A very good book, I recommend it to anyone who wants something fast but not deep and with good stories. Although the end was abrupt (when I expected the next arc I realized that it was the last) I loved it, it was what I always wanted for my protagonist.
0 Likes · Like Permalink | Report
Leave a Review (Guidelines)
You must be logged in to rate and post a review. Register an account to get started.

Taking Responsibility of Another World, Are...