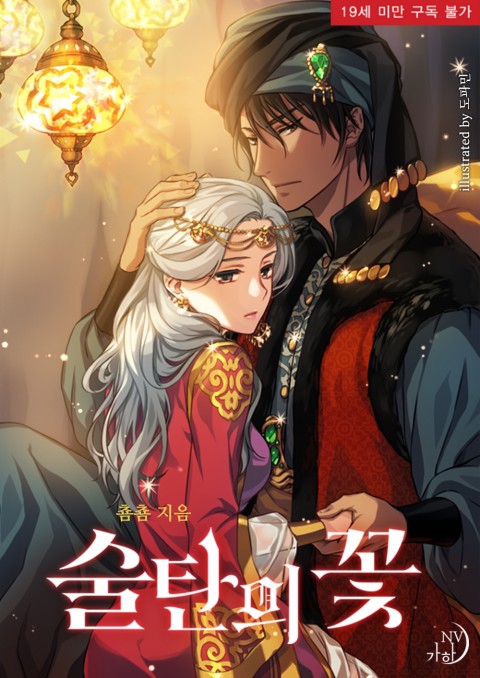 One entry per line
춈춈

One entry per line
Dopamine
도파민

Status in Country of Origin. One entry per line
13 Chapters (Complete)

“Even if no one believes in me, you must, Miss Saye. I am a man who has decided to become the Sultan because you are a woman that belongs to the Sultan.”

Saye, who was a young flower who had not been picked in the Sultan’s harem, survives the crisis of the 9th Prince, Kainer, who is the son of the previous Sultan, starting a rebellion. Saye, who struggled to even keep herself alive, only wishes to escape the harem and step out into the world. But Kainer, who has become the Sultan, has no intention of letting her go and shocks her by telling her that she was the only reason he had become the Sultan…

“You are the Sultan’s flower.”

Whenever his lips passed by, Saye softly cried out moans.

“I became the Sultan because that was the only way to obtain that flower. So, please quietly remain here.”

These are recommendation lists which contains Sultan’s Love. You should give them a visit if you're looking for similar novels to read. Alternatively, you can also create your own list.
More Lists >>>

Too early for putting up review but well just to heads up. This is kinda dark themed novel with horrid scenes and r*pe sht. If you are the type looking for fluffy and saintly MC build up, this isnt yours. It'll be bias for team sweating for trans and making it available for reader getting low rate with complaints about its theme when its clearly TAGGED above.
Spoiler

MC's became concubine of an old sultan at age of 7. Eventually, bcs of young age, she was kept on dungeon, forgotten and unnoticed (she kept herself hidden/unnoticed to survive and through times lost her will to live).

+11 yrs, somehow accidentaly discovered by the Sultan and was about to get forced into a sexual staunt (mol*sted and barely escaped) but stopped by sudden news of revolt of prince, male lead whom she secretly admire. Long story short, male lead saw the MC and took her with him as he sits on throne replacing his father and the story goes.

Okay so the story has a dark theme, because the male lead is a nut job but he’s a sultan 😳 and the reason the girl cannot defy him is because she “more than anyone wants to live” so I wouldn’t call her s*upid or a damsel in distress, otherwise she wouldn’t seek freedom. I love the small inputs here, the art is awesome too. So excited to see how this develops and yes, waiting for an explanation for his possessiveness!!
4 Likes · Like Permalink | Report

I don't recommend this book. The FL is the typical dumb and weak damsel in distress. I never liked OP FLs but this one is unrealistically clueless. But the biggest problem to me is the ML. He is the type of man that is only kind to the FL but unacceptably cruel to everyone else. For example, he sentenced the FL's guards to death over a small mistake, even though the FL isn't the slightest bit hurt. I also feel uncomfortable reading stories that romanticize obsessive behavior. There is also... more>> some very disturbing r*pe scenes in the beginning of the story. <<less
4 Likes · Like Permalink | Report

This is another classic novel where the male lead is only nice to the FL but is absolute tr*sh to everyone else. Which is fine if he doesn't abuse his power unjustly. If he wants to be a king shouldn't he treat his people fairly? Yet he terrorizes everyone who isn't "nice" enough to the FL, even though they're just doing their job as usual. Sorry for the rant, I'm just tired of seeing novels romanticizing garbage men.
2 Likes · Like Permalink | Report

For those who like possessive male lead and weak damsel in distress FL, then this is for you. Overall, the story is typical harem style, however this one the sultan just love one person (quite possessive too). Quite have the r*pe scenes too, so for those who want sweet love story in harem better do not read this, coz this is no. Warned before ... more>>
Spoiler

the girl enter harem at a very young age, but managed to keep herself safe by hiding.

She saved the the ML when he was assassinated (so this made the ML adore and love her, remind he become sultan for her because he see her as part sultan's harem, so in order to have her, he become sultan)

[collapse]
I rate this 4 starts because exclude the dark scenes, everything else is quite sweet, especially ML to FL. <<less
1 Likes · Like Permalink | Report
Advertisements
Leave a Review (Guidelines)
You must be logged in to rate and post a review. Register an account to get started.