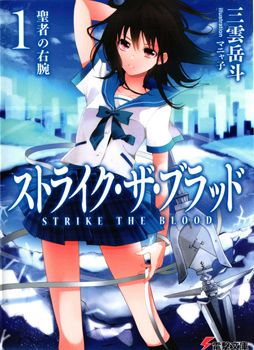 One entry per line
Mikumo Gakuto

One entry per line
Manyako

Status in Country of Origin. One entry per line
22 Volumes + 2 APPEND side-story volume(Completed)

“The fourth primogenitor” – That’s the world’s strongest vampire that should only exist in legends. Accompanied even by twelve Kenjuu and spreading calamity, this phantom vampire appeared in Japan.

Wielding the strongest anti-primogenitor spirit spear, Yukina arrived at Demon Sanctuary, “Itogami City”. What was the true identity of the “fourth primogenitor”, Akatsuki Kojou, she encountered over there!?

These are recommendation lists which contains Strike the Blood. You should give them a visit if you're looking for similar novels to read. Alternatively, you can also create your own list.
More Lists >>>

Let's just say the protagonist is hard to bear. And others too.
For example, in volume 2 I seriously raged when... (mild spoiler) ... more>>
Spoiler

Kojou apologizes for involving Yukina in the Armed Apostle accident, and expressed his gratitude to her for her help. I have three things to say.

First, don't speak as if you somehow caused the accident. You are just a random victim. Actually, if I had to be perfectly objective, isn't Yukina the one who worsened the accident, unvoluntarily helping the antagonist?

Second, don't speak as if she involved herself in the accident because of you. Instead, she one sidedly decided to involve herself even though you wanted no part of it.

Thirdly, don't make it look like she is the one who helped you. Instead, she guilt trapped you into helping her. She should be thanking you.

[collapse]
More generally... It seems like the author is trying to make characters as unrelatable and unreasonable as possible. Especially Sayaka : (not a spoiler but a rant explaining how much I hate this character) :
Spoiler

I really dare the author to properly explain her thought process without making her look like a mentally ill person fit for a mental asylum. And it makes me hate all other characters for forgiving her that easily. Yes, she is cute, so what? In my eyes, she is a much more dangerous individual (and much more of a criminal) than the main antagonist of volume 1 (mentally unstable people with lots of power are generally dangerous and tends to do crimes).

[collapse]
I mean, in this kind of novel, when you feel more respect and interest for the main antagonist of the volume than the newly introduced heroine (instead hating her), you just know there is something wrong. Actually, on that note : while most characters are awful, antagonist are pretty good. At this point, the author would have done better making his character follow cliche. Because while making original characters is obviously great, if they don't make any sense what's the point? <<less
13 Likes · Like Permalink | Report

Our lovely lovely vampire harem.. No the girls are not the vampire this time.. :O but our MC yey!
We follow our MC in a nicely thought out world with supernatural happenings.. The plot is interesting with it kind of changing each volume. I do recommend reading this once the english release catchs up :3
5 Likes · Like Permalink | Report

Alright I gave this novel 4 stars but I will need to warn ya'll, this is not a story many would like. The characters are unrelatable and honestly they are all just extreme versions of tropes. MC is extreme version of dense Shonen harem protag, cover FL is a misguided tsundere, we have man-hater whose background is well not that good to warrant her the personality she had, princess archetype is well done but still basic, legal loli is there again just to soothe the lolicons, and then another cast of... more>> people whose actions regularly go against their preestablished character profiles or developments to give way for the new profile or development the author wants to put up. If you didn't understand what I wrote there the TLDR is: Author had an idea, wrote on the fly and this is the result. Overall the character and their developments are barely average and that is even when my standards are dropped as this is a JP harem. Story wise the novel didn't do any better, the plot developments were random and sometimes forced, there are two or three well stringed overarching plotlines but that was it. If this was an adventure story it would have done better but the setting mostly revolved around one place with the occasional out of town arc to not spoil those scanning the reviews. I would have liked to go deeper but honestly I'm already tired just thinking about assessing this story objectively. Now I'll go to the good parts, its a great story when read when passing time or just resting your tired mind. Ignore all sense of reality and this story would become a great one. Though I would recommend to watch the anime that should be reaching its final stages this year. The novel was adapted which saved the whole story for me, reading it is just a waste of time, but watching it gives the story a more enjoyable feel. Overall the four stars were given because this story made me cringe and laugh a lot. Though it did trigger me on rereads, so I suggest watching the anime if going for a second run on the story. Overall: The story had a great premise, failed execution but overall still enjoyable if you can forgive the many writing problems it had for a novel. Would recommend but to people who could tolerate non-realistic plot developments. It is fiction but a lot of readers, me included sometimes look at the realism but this story- well the abilities of the MC are at the level of godlike so I don't know if that warrants a realistic take. <<less
1 Likes · Like Permalink | Report
Advertisements
Leave a Review (Guidelines)
You must be logged in to rate and post a review. Register an account to get started.