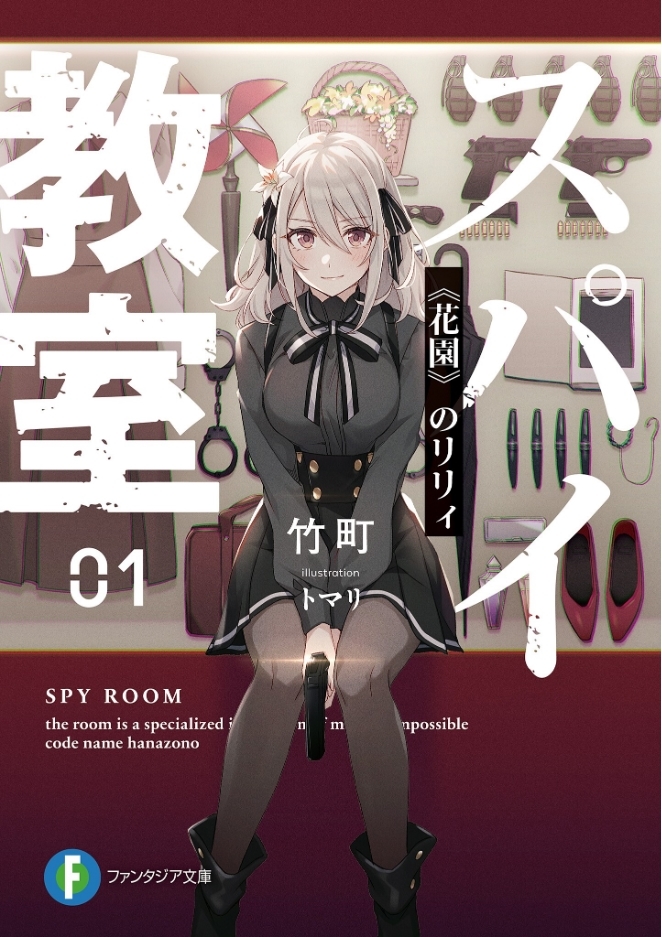 One entry per line
Tomari
トマリ

A world where wars are fought with spies. With a mission success rate of 100%, the remarkable, yet rather difficult to deal with, spy Klaus is being tasked with an almost impossible mission by the agency, harboring an insane 90% chance of failure and death…which for some reason involves seven inexperienced girls?!

These are recommendation lists which contains Spy Room. You should give them a visit if you're looking for similar novels to read. Alternatively, you can also create your own list.
More Lists >>>

First off, I think this kind of LN is fresh. At least I never read an spy-themed Japanese LN. Even if it already existed, I never really stumble upon one, so it's a plus for me I was drawn into this series because of the illustration at first, because it was drawn by Tomari-sensei, same illustrator as tomoimo / iroza. Another plus Story-wise, it's at least interesting. Not really much mystery here, like most detective/spy series but more of psychology, which is another plus for me since it is one of my... more>> favorite genre. There's a lot of espionage, so much that I as a reader got duped too. I have more to say but I guess i'll just wait for future volumes. My suggestion for you potential readers is, if you want to read this, read the whole volume at once. Pause it by a little and you'll get confused yourself. <<less
16 Likes · Like Permalink | Report

I think this is my first review, I was going to wait till I completed the 4 volumes to review it but the first volume is already worth reviewing (both in bad and good light). First the good things: +The main characters are pretty much all likable, the only one I didn't like that much is lily and by volume 2 ch 2 I am changing my mind about her... more>> +A story about newbies spies training and becoming better in their fields is pretty interesting +The story is pretty straight forward, no 3 chapters explaining something you already understand +The author tries to play with the reader And with that one I am starting the bad things, well, more like THE bad thing, because that is the only reason I did this review so early. -I said "tries". The volume 1 has 2 """plot twist""", one from the antagonist side and 1 from the protagonists side. The first plot twist is not really a plot twist, you can see it coming from 4km away, but that wasn't the important plot twist, most likely it was a plot twist to distract the readers from the important plot twist, the protagonist side plot twist, and I think if the author had managed to do the second plot twist I would give the first volume a 4.5 at least, but as you expect, he didn't. The protagonist plot twist is played for all the novel, even in the illustrations of the light novel he is playing with the readers.
Spoiler

The plot twist is that at the end, there were 8 girls instead of 7, in this aspect we are like the antagonist, cause most of the time they describe the girls, and don't name them, but all of them talk, same with the illustrations missing a girl, and a lot of the volume talking about them as 7. And I think that was genius, the problem lies in the one missing being Elna, because Elna have a whole chapter for her in the same volume, like, I'm not gonna forget her, the moment they described Elna I went to the illustration and was like ("Huh? She is not here?"), so midway in the volume I already suspected the plot twist, and later on I realized, and I realized klaus plan also. So at the end I was reading something I already knew.

[collapse]
Tbh I felt insulted, I think the author had little faith in the readers, he thought that having monika do that role was "to hard to see it coming" or something like that.
Spoiler

Monika should had Elna's role, because Monika had almost no participation in the volumen but at the same time she was the one with the more attention seeker presentation (being the only one capable of opening the locker), if monika was the one missing mid fight I would be like "mmmm, there is something wrong here" and when the plot twist hit I would be like "wow, that was cool"

[collapse]
Well, here end my rant about a missing opportunity <<less
1 Likes · Like Permalink | Report
Leave a Review (Guidelines)
You must be logged in to rate and post a review. Register an account to get started.

My yandere GF and Me

Reborn as a Basic Barista: Is...
Advertisements