Novel Updates
RegisterLogin
Theme
Search
Your changes has been saved.
Advertisements
She’s Not Our Daughter!

Home >
Novel >
She’s Not Our Daughter! 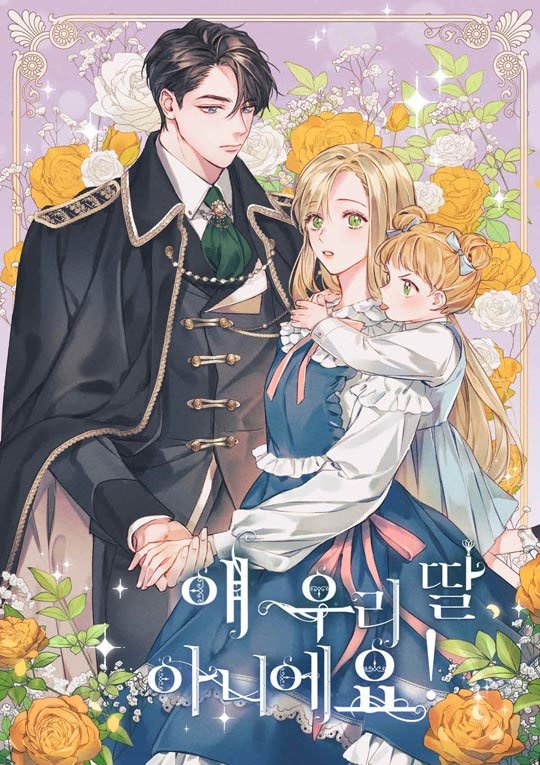 Status in Country of Origin. One entry per line
130 Chapters (Ongoing)

A few years ago, my ex-boyfriend, who I broke up with after our one-night stand, came to visit me as a duke. He said he regretted abandoning me.

What are you talking about? What’s there to regret when we’ve split up with ease?

Also, I think he even misunderstood my sister’s daughter for ours.

“I had no idea. I didn’t know you were raising our child alone.”

What is this situation?

Just then, my niece, who hid herself behind my back, stuck her tongue out at him.

“I hate you, you’re a bad guy who abandoned us. Go away!”

He staggered in a shocked manner.

No, he didn’t abandon you.

And I’m not your mother!

How to Hide the Emperor’s Child (2)
Female Lead’s Mother and Male Lead’s Dad are Married (1)
I Found a Husband When I Picked up the Male Lead (1)
I Will Make an Effort to Change the Genre (1)
I Became The Stepmother Of An Irrevocable Dark Family (1)
When I Quit Being A Wicked Mother-in-law, Everyone Became Obsessed With Me (1)

These are recommendation lists which contains She’s Not Our Daughter!. You should give them a visit if you're looking for similar novels to read. Alternatively, you can also create your own list.
More Lists >>>

This is funny! A story full of misunderstandings. Most characters have silly misunderstandings that honestly are so easy to correct. If the MC sat down with the guy and explained everything then the story would be over. MC doesn't do that though. I think it has something to do with the sister.
Spoiler

MC's sister is a mysterious figure who seems to be hiding something from MC. I think it could be a birth secret? Both sisters seem to be very talented in different areas so I have a feeling that it might be a birth secret.

I'm pretty sure it's been mentioned that MC doesn't correct the misunderstanding to protect her sister's kid. There seems to be some people after her sister or her kid or maybe the MC herself? I think the sister is hiding and trying to find whoever it is that is planning to harm them.

[collapse]
For now, most characters seem foolish. The plot is the type where the answer is simple but the characters themselves make things complicated for themselves. For character development, I've only read 28 chapters and I haven't noticed any for now. The story is just starting after all so maybe (and hopefully), I can see more of it in the later chapters. This is more of a rom-com with some hints of mystery? I don't think this is a deep and emotional type of story. It's pretty silly and funny. If you're looking for a light and easy read then maybe this is for you?
2 Likes · Like Permalink | Report

To address all of the comments with the "misunderstanding" in the story, im confused as to why mostly everyone said that she could've just told the ML directly. The MC had a specific and perfectly understandable reason as to why she couldn't explain and tell the ML that the girl is not her daughter. I mean why would the girl even be with her for so long if she had her own biological mother to be with and take care of her? ... more>>
Spoiler

The girl (which is her niece and sister's daughter) is with her because her sister is an archmage and the girl's possible father may also be an important person. (They said he was the owner of the wizard's tower if im not mistaken) The MC had to take care of Hanael as they needed to protect her and her parents arent really available to be able to take care of her, its also said that her sister is on a secret mission where it is probably really dangerous for Hanael if she were to grow up with her real mom instead.

[collapse]
For those of you who is looking for a new read, give this a shot and try reading it yourself. <<less
1 Likes · Like Permalink | Report

I gave this novel three stars, but to be fair, if you can overlook the fact that it's based on a misunderstanding that could be easily solved in five seconds (I can't make that mental leap personally) then the novel is a delight. The writing and translation is good and the characters are fun. But, well, yeah. All the MC has to do to get out of her troublesome situation is to tell the ML that the girl isn't his daughter. And she doesn't immediately do that, for... some reason.
12 Likes · Like Permalink | Report

So the misunderstanding is actually pretty funny but I hope it gets resolved soon.... idk what it is but the child’s actions annoy me. Anyway looking forward to more
8 Likes · Like Permalink | Report

This novel is just nonsense... It is rushed, poorly written and it's so called plot is ridiculous waste of time.
4 Likes · Like Permalink | Report

You know, I usually enjoy misunderstandings but not the ones that can be solved in one sentence. The fluff was good, writing was decent but I simply don't enjoy this one.
4 Likes · Like Permalink | Report

Delightful twist on a very typical romance plot on cn/kr novels. I just hope the misunderstanding doesnt get dragged on s*upidly, the kid doesnt help since she is very much a little kid that thinks she is a capable "adult", she is adorable. Misunderstanding galore and I also think we got unreliable narrator and their relationship and breakup did not go as the FL thinks.
2 Likes · Like Permalink | Report

This novel is pretty s*upid, especially since the misunderstanding is so easily fixed, but for plot reasons, it's not. The level of miscommunication between MC and ML rivals that of dog blood chinese novel dramas that involves the lady running off with a bun and ends with a lot of angst and family drama. I repeat, this novel is s*upid.
1 Likes · Like Permalink | Report

This series has been a delight to read due to the characterisation and plot so far. It is a light, fluff and funny read set in an interesting fantasy setting where magic exists. It never pretends it is anything that it is not, continually delivering on all of the promises made in the first few chapters. And yes, I really like this story. The story doesn't reveal exactly what is going on with Hanael thus avoiding the dreaded 'info-dump'. We are also provided a wealth of misunderstandings due to the ML... more>> and large group of the cast members ignoring and often filling in the gaps to fit with their own preconceived notions. This element seems to have not hit the right notes with some readers but I find it quite charming as it gives us insights into the mindsets of some of the cast, such as the adorable godmother of the ML. <<less
0 Likes · Like Permalink | Report

So far I think there is a reason why she can’t correct the misunderstanding.
Spoiler

it might have something to do with her sister (the real mother of Hanael) it may be to protect Hanael since she also casted that hides the village, but it only lasted for 5 years. I think that’s why she can’t blatantly tell to others like the Duke that Hanael is ‘t really her daughter

An Identity Beyond Self

Secret From the Past (LitRPG)
Advertisements