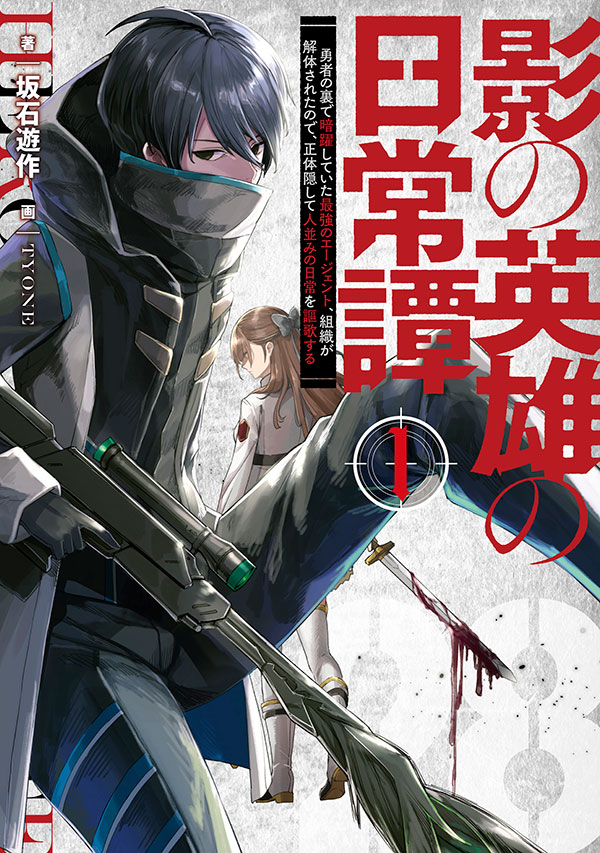 One entry per line
TYONE

Tweight, the ace of the “agency” in the dark side of kingdom, undertakes all the dirty work for country and supports the Brave to subjugation the Demon Lord from shadows.

In the end, Tweight will get more and greater achievements than the Brave and become the “Shadow Hero”, known to everyone.

The Agency will be dissolved after the Demon Lord is defeated.

Tweight gets a recommendation from his boss.

Since he was brought in by the agency when he was a child, Tweight, who has never lived an ordinary life, wants to enjoy everyday life in the same way as ordinary people do.

At a later time. On the recommendation of his boss, Tweight decided to register at Builder Academy, which is largest institution in the Kingdom.

What awaits him there is the daily life he craves with his school friends who have unique habits.

Even though the demon lord is defeated, that does not mean that the world has become peaceful.

Inherited Demon Lord. Hostile organization. And pus from his own country.

There are still a few conflicts in the kingdom.

It was the beginning of an unstable era with all kinds of threats.

The daily life he is looking for will be destroyed in a short time if he loses his calm.

This is a story about an awkward boy who is a former “behind the scenes”. Fights, opposes, and tries as hard as he can to protect his daily life from him.

He Didn’t Want to Be the Center of Attention, Hence, after Defeating the Demon Lord, He Became Guild Master (LN) (1)
To Be a Power in the Shadows! (1)
World Record (1)

These are recommendation lists which contains Shadow Hero’s Everyday Life. You should give them a visit if you're looking for similar novels to read. Alternatively, you can also create your own list.
More Lists >>>

It's pretty good, but the genres listed are a bit misleading. The demon Lord already bit the dust. There's no grand overarching villain. The secret organization that raised the MC is already disbanded. He has nothing left to do, except try to live a normal life. He has no massive trauma or anything like that. It's like the title says. It's a slice of life. It has action and such, but that's not the main point. There's never a point where he's in any danger. Some people would think that... more>> this is boring, but I that the author just did a great job of delivering exactly what they promised: the everyday life of a now retired shadow hero. <<less
5 Likes · Like Permalink | Report

By ch 24, there isn't a hook to this story. There is no antagonist and there is no conflict. At best, there is some element of conflict between the different classes of students, but the MC doesn't care. Without at least some inner conflict for the MC to struggle with, he's basically an observer of more interesting characters. Unfortunately, those characters haven't had enough exposure to leave an impression, so they're basically just archetypes at this point... If the focus of the story wasn't going to be the MC, then the... more>> story should have focused more on the other characters. <<less
3 Likes · Like Permalink | Report

It's a poor man's version of mahouka koukou no rettousei in a fantasy world. An OP sniper MC who was trained to kill since childhood, enters an academy to experience 'normal' life. Only issues is that there isn't a mainline hook / goal for the MC, so he is just going along the flow and 'fixing' his friends problems. Also since he is more free, he doesn't really have to hid his abilities / identity carefully. Sure, he doesn't explicitly say what he did before the academy, but a logical person... more>> could deduced it based on his skills and words. Also the side characters are barely characters so far expect the FL. <<less
1 Likes · Like Permalink | Report
Advertisements
Leave a Review (Guidelines)
You must be logged in to rate and post a review. Register an account to get started.

There's No Magic In This World!
Advertisements