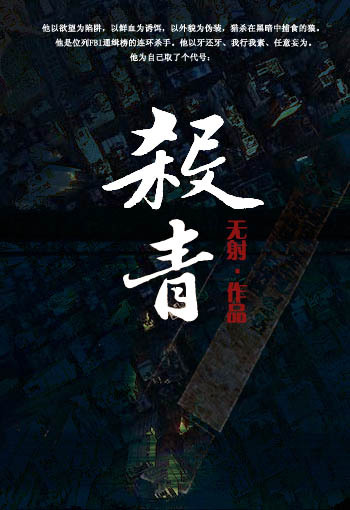 Status in Country of Origin. One entry per line
87+6 Extras (Complete)

He uses desire to ensnare others, he uses blood as temptation, he uses his appearance as a disguise. Like a wolf, he hunts for prey in the shadows. He is among the FBI’s most wanted list of serial killers. He lives by his own law, the Lex Talionis. He does things his own way, independent and reckless. He gave himself his own name: Sha Qing

“The purpose of the prison is not to destroy people’s lives; it’s meant to replace the broken chains of law and morality, to bind the beast in their hearts again, until it is completely subdued.” Said Leo.

“Everyone has beasts in their hearts, agent, and so do you.” Sha Qing extended an index finger and pointed at Leo’s heart.

“Yes, but unlike you, I will use those iron chains to lock it tightly in a cage.”

“It’s not as easy as you think, Leo. Things are always changing, and often beyond your control …”

With his blood-stained lips, he suddenly kissed the stunned FBI agent.

The salty bloody taste spread in their mouth and the fiery contact was enough to burn the tips of their tongues.

Leo’s eyes suddenly felt heavy, but his face did not show any irritation from being calculated upon.

“Did you also count this?” He raised his wrist with effort, then closed his eyes.

Sha Qing looked down and saw that a pair of steel handcuffs had fastened his left wrist with the other’s right arm.

He lowered his head and kissed the sleeping man’s wet, dusty hair, and said in a soft voice:

He then dislocated his own hand to remove the shackles that bound them together.

Sha Qing stood up and walked away, until his figure disappeared into the darkness…

One entry per line
The Last Killer
杀青

Escape the Infinite Chamber (2)
Black Butterfly, Where Does the Black Butterfly Go Drink Water (1)
You Look Like You’re Made of Money (1)
Card Room (1)
S.C.I Mystery Series (1)

These are recommendation lists which contains Sha Qing. You should give them a visit if you're looking for similar novels to read. Alternatively, you can also create your own list.
More Lists >>>

This gets a reluctant 5/10? The last 20 chapters or so just didn't do it for me, I found it rushed and it felt like the author completely lost their direction and started writing whatever came to mind. The characters at first were more carefully presented to the reader and the pacing was flowing much much better. Such a shame really. The ending was okay.
0 Likes · Like Permalink | Report

Can't believe there's no review yet for such an outstanding novel (perhaps because it's relatively new?). Oh God, if only I could give more than 5 stars... It's a story about 2 heroes: there's this righteous hero - a young, handsome (duh), rising FBI agent, and his counterpart the dark hero - a serial killer hunting serial killers, worshipped and loved by the people. They're hunting the same criminals, but want a different end for them. One wants to follow the law and put them behind bars, the other one wants them to... more>> have the same ending as their victims. Both for the same reason, they just do what they think they should do. Despite not being able to be more contradictory, they find themselves tangled with each other with a different feeling than hate, as they should have. There's also another critical character beside the FBI agent, the double-edged sword. You'll figure out along the story (very easy to notice I think, I had my doubt since the first case lol). The plot is full of twists, with very good details and expression. It has American style of writing so I find it more comfortable to read and easier to imagine. Each character is thought well, the author enables us to properly understand why they do this and that. Don't forget to mention how conflicted their feelings are toward each other, my heart ached for them! The feelings are actually very human, I believe them. There are many happy moments as well, until one point when things seem to have gone too far without no return. The only things not fitting my taste are (1) we won't be able to solve the mystery in some cases due to insufficient clue given and (2) too much detail on other people's perspectives and stories which are not that significant and could even be removed at all with no impact to the story. Other than that, I would say this is very well done by the author. This novel succeeded in pushing me stay all night to finish the chapters during weekdays when I had work the day after, when I normally have enough self control lol The ending is highly satisfying, couldn't think of a better one honestly (don't worry it's not a tragedy!). At the 3/4 of the stories I just wanted everything to be revealed fast so they could find their happy ending, which they truly deserve. You won't regret trying this novel, trust me ;) <<less
20 Likes · Like Permalink | Report

I loved this so much I actually went to read the raw when I finished the translated chapters, and that, I know it doesn't sound impressive, but for me it is an actual event!!! The novel is fast paced, careful of details and realistic, thrilling and clever, the kind that you can't stop reading until it's finished. On the romance side, it's lovely, no insta-romance but not even painfully slow, particularly in the second half of the novel, where there's the real flirting and hot stuff (really HOT stuff! I mean, ... more>>
Spoiler

[collapse]
) The MC and ML (and all other characters, really) are great, well thought, with their own well defined personalities, and, well, issues, but I loved the psychology behind it all, and it's great how they manage to solve their problems together and how that deepens their relationship. To sum it up: Story: 9/10 (because of a personal principle that there's always room for improvement, I never give 10/10, even if it's the vote of my heart) Romance: 5/5 Translation: 3/5 (as far as it went, obviously) I want to read other works by this author!! <<less
7 Likes · Like Permalink | Report

Good start. My only complaint is that whoever the narrator is, is very unreliable.
Spoiler

It's a very irritating point of view that makes it hard to tell who main couple is. It seems to be third person omniscient but limited by Leo's knowledge. Because of that, I consider Leo to be the MC and Sha Qing to be the ML even though they're apparently reversible. At least for first 8 chapters. I have no idea if the writing will change.

[collapse]
The MC and ML are:
Spoiler

Leo Lawrence, which is pretty obvious, and Sha Qing, which is also obvious. Less obvious is that Roy = Sha Quin = Li Biqing

This one was a great read, although not a light one. Full of action, with fleshed out lifelike characters who act psychologically thrustworthy in accordance with their personalities. Both ML and MC are mature, with their own strong beliefs and goals. There’re no s*upid misunderstandings: they either scheming agains each other or straightforwardly tell about their feelings. The author leaves us some clues, if you’re observant enough, you’ll guess about some secrets before they are revealed. Another question is, that those feelings could be too difficult to accept, them being the... more>> serial killers’ killer hunted by the FBI and the FBI detective. As a result, there will be some ugly and hurtful things between them, but in the end they will resolve everything. As someone has already said, the ending is very satisfying (I was wondering how the author will solve all the contradictions between the characters and it was done beautifully). All in all this was a thrilling story with good pace, likable and lifelike characters, great chemistry between them and super hot smutty scenes! <<less
1 Likes · Like Permalink | Report
Leave a Review (Guidelines)
You must be logged in to rate and post a review. Register an account to get started.