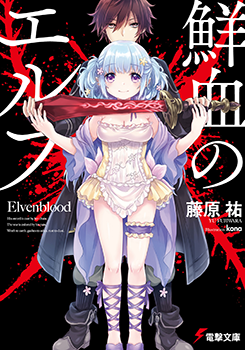 One entry per line
Fujiwara Yuu

One entry per line
Kona

Status in Country of Origin. One entry per line
2 Volumes (Hiatus)

Human siblings living in a remote village, elven siblings living deep in the forest. The peace of theirs, who should not have been friends, should have continued forever. However, when the elves suddenly started an invasion on the human world, the feelings of the four were torn apart and they took different paths. Eventually the human boy Imina, and the elf girl Ellis, stood on the battlefield. The sword he holds is crimson. The same colour that had flowed on it, and will flow on it from then onwards…

These are recommendation lists which contains Senketsu no Elf. You should give them a visit if you're looking for similar novels to read. Alternatively, you can also create your own list.
More Lists >>>

This story is a dark fantasy about a war between elves and humans. Elves have the power of organic necromancy which has the power to turn the corpses humans into ogres, orcs, and goblins. While humans have the power of inorganic necromancy which has the power to imbue the power of the elements into their tools of war. The story begins with a our main character who has a seen first hand the beginning of a bloody, cruel elven invasion which tears apart the MC's village. This story is dark... more>> and gritty with a main character who has been twisted by the cruelty of the elves. A story that hits the heart with hurt, love, pain, and rage of the characters' experience. +5 stars for the no nonsense profession of love between the MC and his beloved that you usually never seen from those stereotypical spineless 12 year old MCs in Japanese LNs <<less
21 Likes · Like Permalink | Report

Despair. One word that can describe this novel perfectly. It's a tale about sadness, grief, wrath and despair of a living one in war. It contained war scene in its most natural and gruesome way: mass killing and genocide. ANd more than anything, you'll see that anyone can die in war.
... more>>
Spoiler

There's a synopsis in description, but I will give you a bit more insight of this LN. Elves and humans was on neutral term. They didn't try to provoke each other. But, everything become different when elves decided to invade humans. And they invade humanity to make them become their s*ave and monster. Simply, elves didn't think humanity as their equal. Yeah it is an extreme racism based on power of a race.

Then there's a human boy that lost everything to elves. His BF betrayed him and kill his

village acquaintances and proceed to make them monster

. His family is slaughtered by elves in front of his eyes. He was 'almost' died because of them. And what do you think he will do? REVENGE. Kill them and give them his grief. Break their soul and bodies. Bury them and send them to hell their belong. That's all he thought. The journey of revenge has just began.

Well, it's my personal thought, but it's a novel that is out of normality of JP LN. Dark and very heavy. I recommend this LN if you liked Revenge, Dark, Gore, and Anti Hero Protag.

This story has one of the most grim plotlines that I’ve ever seen. Since the two previous reviews have already done a pretty good job summarizing the premise, I won’t bother describing it, as it has clearly been established that it is a great strength of Elvenblood. However, where Elvenblood stands out is not limited to its plot. The characters, particularly our MC, Imina, accentuate the tone of the book because he’s such a tragic character. Literally the only things that still ground him to life are revenge against his... more>> former childhood friend, and the only girl who can provide a connection to his home, Ellis. Furthermore, although there has only been 2 volumes written as of today, the author goes out of his way to incorporate less pivotal characters in such a way that they remain relevant and catalyze the plotline, not take away from it and divert it onto a subpath saturated with filler text. Not only this, but their interactions are genuinely enjoyable and provide a stark contrast to the situation in Elvenblood. Other than well-written characters, the world-building is quite good as well. The author’s left many things for the reader to infer, but cultural differences between the elves and humans, to name an example, is evident from the start of the series. As the story progressed, I found myself getting more and more invested in the scope of the world of Elvenblood. What made this series so good, I think, was that while it wasn’t made clear at the start of the light novel, Imina and Ellis are the most f*cked up couple you will ever meet. I’m not talking about them being mentally deranged, or their relationship being abusive either. They clearly love each other, and Ellis has already pledged herself to Imina multiple times. The problem is, their circumstances have made it so that both of them suffer merely by existing with the other. They bear their love, twist it with desire for vengeance, and sometimes, it feels as though Imina is only using Ellis as a tool for his own ends. Overall, Elvenblood is a great novel, with great translators working on it. To whoever is interested now, read this. You would be missing out if you didn’t. <<less
5 Likes · Like Permalink | Report

The most darkest story ever. Twisted and despair on the MC.
Spoiler

The MC loses his family and village, betrayed by his best friend which gives him hatred against the elves.

The interesting thing is (elves') organic and (humans' inorganic) necromancy. The war between humans and elves are also interesting and bloody.

The sad thing is you may or may not see elves the same way again.

The Spec Ops: The Line of light novels. Even if it's not going to get a conclusion, I would recommend. Read for a change of mood.
0 Likes · Like Permalink | Report

Don't know how there are reviewing this novel giving 5 🌟 So many plot holes You'll find it if u read to the end MC is not op besicall he is tooo weak with his elf girlfriend he is just small fry even he trained himself for 4 years or so and in human's side there aren't any powerful warrior it's like magic didn't even exist
0 Likes · Like Permalink | Report
Leave a Review (Guidelines)
You must be logged in to rate and post a review. Register an account to get started.

A Meta-Human In Another World
Advertisements