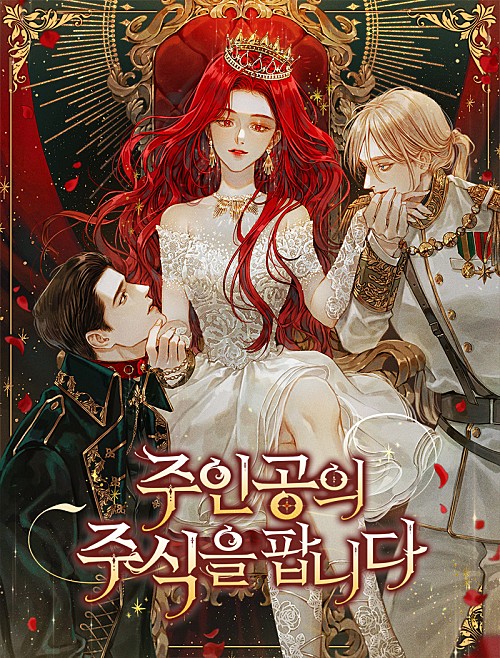 One entry per line
목감기

The day I notified my husband, the Grand Duke of the North, of my intention to get a divorce, a system window that suddenly popped up without any notice would completely change my life.

It said that if I couldn’t sell my shares and become the main character, I would die.

Tell me, does that even make any sense?!

In order to live, I would have to show ‘them’, who wanted to buy shares, what they wanted to see.

It couldn’t be helped then, I had no other choice.

Whether it’s the obsessive Grand Duke of the North, the friendly Holy Knight’s Commander, or the reckless head of a guild, there’s no choice but to enjoy a deep romance with everyone!

Where is the Morality (1)
I Became the Villainess in an Anticlimactic Novel (1)
The Villainess Is Worshipped By The Mafia? (1)
Please Don’t Come To The Villainess’ Stationery Store! (1)

These are recommendation lists which contains Selling the Main Character’s Shares. You should give them a visit if you're looking for similar novels to read. Alternatively, you can also create your own list.
More Lists >>>

[28/09/21] hey, it's the translator, mio here! This is a late review but I really recommend this story! If you're looking for a witty and relatable fl, then this is for you! i don't read ahead while translating, but this is a reverse harem (though I'm not actually sure if it ends up as a reverse harem route or if the author will make one of the men the main ml) about an FL that's transmigrated from modern day korea into what we assume is a story, which has a 'system'... more>> that rewards her with bonus cookies when she interacts with the male leads. there's no revenge plot (at least not to my knowledge) and it's a very lighthearted comedic story so far with the plot progressing at a good pace. All the male leads (i assume from what i've read so far) will be following classic romfan tropes (e.g. Her ex-husband, duke periot is a classic overbearing, possessive and cold ML who doesn't communicate his feelings to FL but loves her almost obsessively, the sweet and gentlemanly knight commander that practically SCREAMS green flags and second ml). another thing I do like is the fl's personality thus far since she was also an avid romfan consumer in her past life but she also doesn't put up with the male lead's sh*t when they get too possessive! Everything she has done thus far is super relatable and you can really imagine a modern day person making those sorts of decisions. Her sense of humour is also IMMACULATE, w/ lots of internet slang (each chapter has me crying when I translate it) and the novel art is insane as well, so I do recommend that you give this a go! [03/10/22] one thing I absolutely love about this author in particular is their absolute mastery in making the main character comedic, yet it doesn't give our FL the impression of being dumb as bricks. At times, lorella is absolutely giving the vibe of 'go girl, give us nothing' and you may cringe at her shamelessness, but you realise that's just how she's decided to try and survive. Plus, we get the inner workings of her thought processes too and why she does what she does. She's realistic in her ambition and accomplishments, and while she may feel a tad bit like a mary sue at times (later on in the novel that is, much much later HGSLDKFDSJ) it comes from a very valid standpoint and you'll also find yourself rooting for her to get that top spot. the way this author in particular does character growth too is absolutely chefs kiss. Periot, the dickhead duke
Spoiler

that imprisons her in the first few chapters actually does reflect upon himself after lorella and him sit down and talk. He does take a look back on how he's treated her (albeit a bit late for him to do so), and lorella and him actually end up having quite a healthy relationship. Granted his trope is the overbearing, possessive and cold male lead type, he does change most of the red flags in his behaviour whilst remaining in the bounds of that trope which is super fascinating.

[collapse]
and another one is
Spoiler

one of the fl's rivals for main character candidate, sable lilly. She's an absolute girlbossing queen that I adore, all hellbent on revenge and the type that makes me scream for her to step on me pls. Their relationship is one of rivals at first, and according to sable's personality, quite cold, but as they go through trials and tribulations together, they finds themselves getting closer to each other and end up being friends which I LOVEEE bc I have had enough of authors constantly pitting their female characters against each other just for some man fr.

[collapse]
BUT YES this author truly does stereotypical character tropes in the most unexpected way and I ADORE that. another thing is the fact that the story line is completely unexpected. There are plot twists here and there, and at some point in the story, you may find yourself expecting it to go one way but the author pulls a 180 on you and the story is going in a completely different direction that you expected it to go. If I go on for any longer i'll end up raving about this novel so i'll just leave it here for now, do give it a go! <<less
16 Likes · Like Permalink | Report

Even though I only read the 1 chapter (because it is the only one available for now) I can tell it will be an interesting story, and one thing I want to tell the the author is that please dont be like other novels where divorce is mentioned but they never divorce even after 8, 000 billion years or just get married again because reading the first chapter I think I can already guess who the male lead is so please dont let the scum be the male lead,... more>> I totally support for a cute male lead so please not the obnoxious bastard <<less
11 Likes · Like Permalink | Report

This is gem! Gold! This is action packed story with fun FL and interesting storyline so far.
Only 4 chapters now but I'm totally into this. Basically, the FL acts as a character in 'the story' where ' reader' in the outside world (you will read the ding sound followed by comments from reader) would give her 'share' aka reward if she can act/please reader. She can also get cookie (parody to Naver system) from reader and use that cookie to unlock special tool to help her in the story. It... more>> is reverse harem story with no revenge plot (yay!) and it is so much fun. There is no dark side so far. I really look forward to a story line. thank you translator nim for picking this up. <<less
6 Likes · Like Permalink | Report

[review: 2021-09-22] The first three instalments of this series are really good. I like the main character so far and the mechanics of the system add an interesting element to the events happening around her. This system also seems a lot more coherent than the AI HUD often seen in these sorts of stories. The action is suitably placed and helps push the story forward in a meaningful way. Conclusion: I need more. "MORE!" I say. (Also a big thank-you to the translators at MC for producing a flowing, easy... more>> to read story. You guys rock!) <<less
3 Likes · Like Permalink | Report

I've read my fair share of novels, but I think this might be my favorite ! All the main characters are already very lovable early on but as the story goes on, they get even better thanks to wonderful character development. The MC in particular grows a lot as a person and while she's already interesting from the start, she becomes even more so later on and you can't wait to see what she'll accomplish next. ... more>>
Spoiler

[collapse]
And the MLs.... Well, let's just say I'm hoping it's a harem ending because I love all 4 of them and I just can't choose one over the others. The stakes are also much higher than I anticipated and it's just so good !! Anyway, I can't recommend this enough. I can already tell that when it'll end I'll get that feeling you get when you finish a really good story and you're both heartbroken and overjoyed at the same time. Just read it ! <<less
2 Likes · Like Permalink | Report
Advertisements
Leave a Review (Guidelines)
You must be logged in to rate and post a review. Register an account to get started.

AI Cultivation: Reborn as a Sword