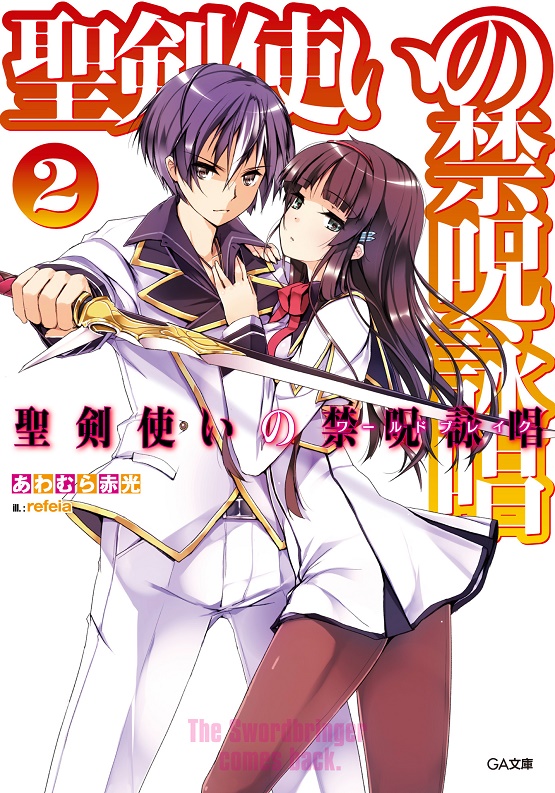 One entry per line
Refeia

Status in Country of Origin. One entry per line
22 Volumes (Completed)

Written by Akamitsu Awamura, the series takes place in a private high school involving the concept of “saviors.” They are known as people who possess awakened memories of their past lives. The story tells of a young boy named Moroha Haimura who comes to this private school.

At the school, there are two types of people: Shirogane, who fight enemies with weapons and techniques gleaned from the Prana powered from their own bodies, and Kuroma, who wipe out enemies with magic to manipulate the Mana powers that surpass physics. Moroha Haimura is the first person with past lives of both Shirogane and Kuroma.

These are recommendation lists which contains Seiken Tsukai no Kinju Eishou. You should give them a visit if you're looking for similar novels to read. Alternatively, you can also create your own list.
More Lists >>>

Well, another one of your usual harem story with an MC without any backbone. So, according to the story plot, he had two past lives, where he had killed thousands and thousands of enemies. So, reading that, one could hope that he won't be like those typical Japanese MCs, who extend their "hand of friendship" towards the most hateful of tyrants. However, sadly, that isn't the case. ... more>>
Spoiler

In vol 4, an assassin was sent behind him by an enemy nation. The second heroine, Shizuno, warned him to be careful and wary countless times. But his reply was always "We should extend hands of friendship towards them" and all other hypocritical bs. Even when Shizuno tried to ascertain the assassin's (which was, as always, a girl with a dark past. Typical.) true motives, she was scolded and forcibly shut up by the MC.

[collapse]
Quite funny and pathetic, right? And it gets worse.
Spoiler

Now, you'd think that his pathetic-ness would go away when he declared war against the enemy nation in vol 4, but sadly, it doesn't. The author explains again and again how he is a cold heartless man and all that, and all the characters are scared of his cold side. Then things happen, and he is later attacked by the Lightning Empress, the main antagonist of the arc. I will mention that the villainess was someone who would mercilessly slaughter young boy and girls just for her pride, and she did so in front of our hero too. Her subordinates forced orphans to fight him, and the MC didn't want to kill them. He disarmed the orphans, but the villainess slaughtered the ones who ran away using her subordinates. Yet, our hero neither kills the subordinates, nor the villainess after the fight. The author uses up pages just to describe how merciless he was and all that, but then just... Forgave a tyrant who had killed hundreds of innocent people and orphans.

[collapse]
You'd think that how worse can it get... Well, it gets worse than that.
Spoiler

When the heroines come to help him in the final battle of volume five, our hero is surrounded by monsters and enemies. The thrill of battle is there, the mood is ready... And they start to flirt. In the amidst of the battle. People are dying, and he is flirting.

[collapse]
Now, the world building isn't that bad, I have seen worse in Isekai Wa Smartphone, I Saved Too Many Girls and some other totally tr*sh series. However, this series has all the bad parts of the Japanese LN industry. A pathetic hero, mood-ruining-cheesy rom-com interactions, "power of friendship" and all that. In the book, an enemy calls the Japanese saviours (heroes) "peace-loving idiots" and "naive" men, and even if not all of the Japanese are like that, this author is. If you want an action-packed series with harem and all that, Sevens, Isekai Tensei Soudouki and series like that would be your best bet. Not this one. But I'll keep reading. Here's hoping that the MC will show some guts and stop being a hypothetical loser. Edit: No, it got worse. It got so worse that I had to write a fanfic just to beat the crap out of the MC. A tr*sh, something I shouldn't have read. I don't know how people vote it as 5.0... It's not even worth one damn star. <<less
25 Likes · Like Permalink | Report

A long ride but definitely worth it. Big thanks to translator-san for reminding me of this novel. I haven't read this novel since 2015 but after being aware of the translation, I decided to buy all of the remaining volumes and finished the series. This is definitely an enjoyable ride till the end.
13 Likes · Like Permalink | Report

Sorry guys I just want to start with do not listen to what Inaho404 has to say he would not know what character Development was if it slapped him in the face. While this is no masterpiece by any standards it's close. Yes there is a good amount of character development and the way that ties in with the characters is spot on. Instead of a female MC falling mad in love with him for no reason what so ever all the characters have background on why, how, and where... more>> they came from. They are actually reincarnations that have the same memory's of there previous lives which is brilliant! The Action is pretty damn good The MC opness shows no bounds. And He takes on people that have the power of literal gods. I warn you it does get a little cliche at times with the whole love and piece and the power of love thing of Typical shounen and the dude is a bit of a prude, and the combat is slow from time to time, but give a chance it will grow on you.
Spoiler

in volume five he can actually turn the ground of a entire city into water and control it with a snap of his fingers, and used it to rip apart a giant made of lightning.

[collapse]
Anyway the story is a good enough read on a rainy day, or if your looking for something different. <<less
5 Likes · Like Permalink | Report

Amazing!!!!!! Just my type of novel.. The MC is also like me.. (NvM) Anyway, , if you are okay with HAREM (Which I love), Opness, and proper MC with cool character developments.. This is obviously for you. I loved this so will you. I am absolutely confident in my judgement. Well, the most important thing is you can binge read this without getting exhausted.. Man.. What a ride!
3 Likes · Like Permalink | Report

So far, its not so bad that its boring, but its definitely not one of the smartest stories out there. Its not quite as bad as the many low effort stories that just try to follow a trend, but it suffers from the same silliness that almost every story in this genre suffers from- kids who are entrusted with the fate of the world and treated like adults with little to no oversight despite possessing powers equivalent to nuclear weapons at times. But the concept of people remembering their past... more>> lives is interesting. Too bad it is hardly delved into and is just treated as a convenient way to establish relationships between the protagonist and the women. There are several other characters who also remember their past lives and were supposedly heroes, yet we are told nothing about them. Plus, if they remember their past lives, do they remember growing old and dying? Then you would expect a lot more maturity from them. Also, there is little exploration of their identities- how do they see themselves? As modern people with memories of someone else's life or as a mix of two different people? How different are their personalities from their past ones? There are a lot of obvious questions to answer but these aren't even brought up except for a single sentence from one character. I hope later episodes go into this. The story itself is pretty interesting, although the main character is the typical meek Japanese guy with no interest in women and unwilling to kill people out to kill him. Its unfortunate that these stories always seem to try and create the same crappy protagonist who is indistinguishable from every other one. And somehow thanks to being such a nice guy, every woman he meets falls for him, even those that started out trying to kill him. Even worse, he doesn't even kill the people who massacre a bunch of children in front of him and laugh about it. I don't even know how this is supposed to be an admirable trait of a hero. It makes even less sense considering he is supposed to have been a conqueror in his previous lives that took countless lives in battle. <<less
1 Likes · Like Permalink | Report

Interesting twist on the reincarnation plot device: if reincarnation is relatively common then in one life you might run into multiple ex girlfriends from prior lifetimes. That's interesting enough as a premise but right off the bat the author decided to throw in some wincest for good measure. Let's see where this one goes. Update: My sides are in orbit.
Spoiler

According to the thoughtful and discrete 5ch

This LN is of a particular sub-genre of the school battle story in which there's a handful of extremely OP people around the world that rules the world in secret and the protagonist just so happens to turn into one of them as the story begins. He is then suddenly surrounded by beautiful girls that help and 'serve' him. This summary also applies to Campione and Strike the Blood the only difference in that the group of OP characters are gods in Campione, vampires in StB and a kind of... more>> reincarnated past lives in this one. I think the MC in this one is a bit more realistic in his behavior, not as prude as the one in Campione or as 'dense' as the StB MC. Ironically the worst series, StB is the only one with an official English translation. Seiken Tsukai s reasonably well written and the backstory is interesting. But for such a long series, it's prone to become repetitive (like Campione did), however the initial volumes I read are good and engaging. <<less
0 Likes · Like Permalink | Report
Leave a Review (Guidelines)
You must be logged in to rate and post a review. Register an account to get started.