Novel Updates
RegisterLogin
Theme
Search
Your changes has been saved.
Advertisements
School Underdog – A Loner Who Woke Up With Supernatural Power Got Called By The Government Became A Normie 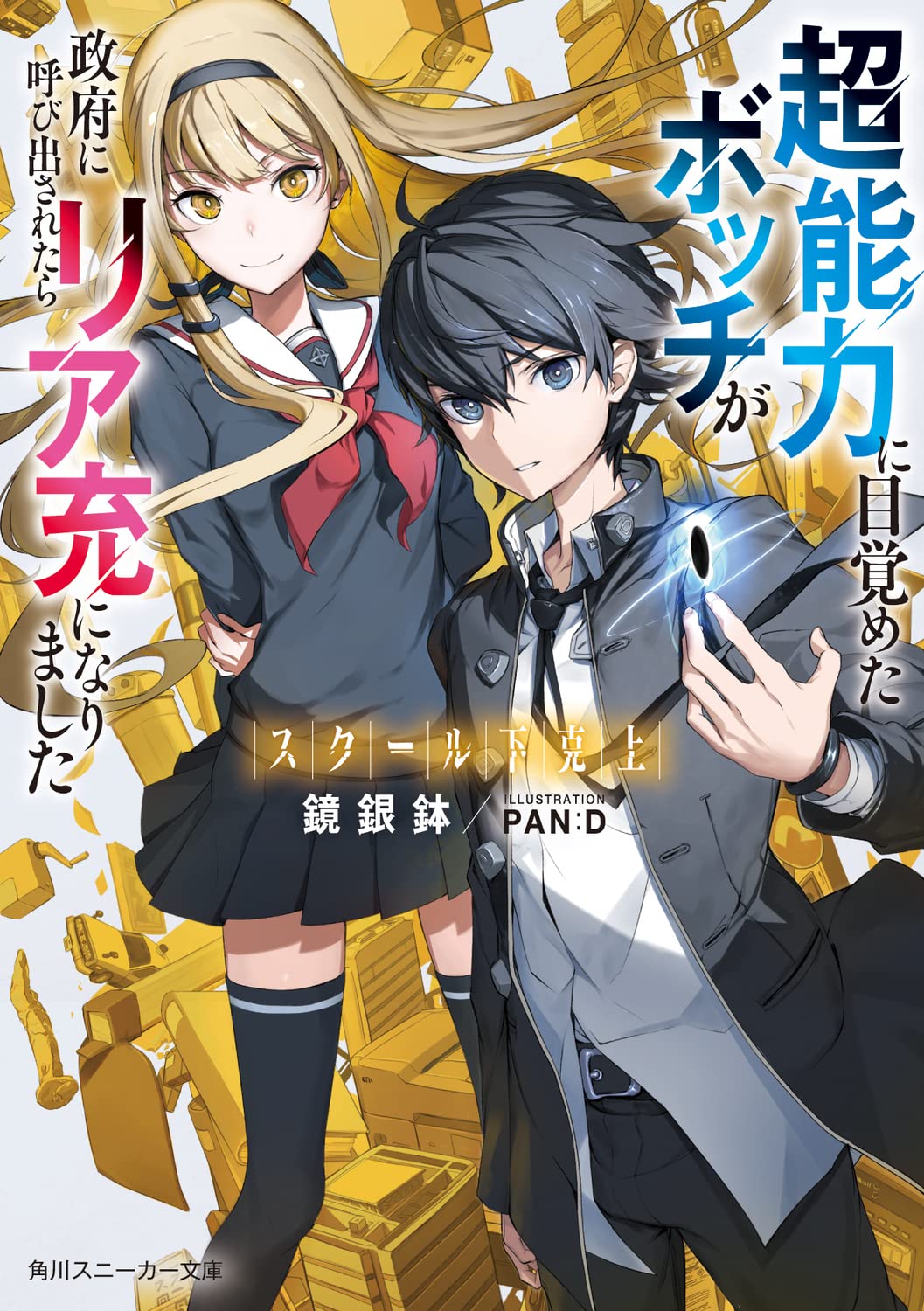 One entry per line
PAN:D

An era in which supernatural powers were born at a rate of one in every 100 people.

The main character, a loner, spent his days being bullied by people with combat-type abilities.

One day, the Japanese government gathered all of the people with supernatural powers in Japan for a certain project.

At that time, it turned out that the main character was also a person with supernatural powers.

These are recommendation lists which contains School Underdog – A Loner Who Woke Up With Supernatural Power Got Called By The Government Became A Normie. You should give them a visit if you're looking for similar novels to read. Alternatively, you can also create your own list.
More Lists >>>

Slow-paced slice of life about [see title], but the issue is the main character is boring. He wasn't really suffering before as a loner, and now that he got his power he's... not really super exciting or interested in it. Or at least it doesn't really feel like he's excited about it, but on day 2 of having the power he's already saying things like "I don't want to rely on it too much for daily life" which is the kind of steady, self-controlled thinking I neither expect nor particularly... more>> want from a teenage protagonist who suddenly gets an OP ability. As for not knowing about his power before that, I call bullsh*t because
Spoiler

You're telling me someone who's been bullied has never strongly felt like he wanted to be somewhere else? Really? I mean, I would think just wanting to go to the bathroom suddenly because he had too much curry would be able to trigger the power, or being really tired and wanting to go to bed, or... Anyway, if this is true, the main character is as emotionally flat as a lich in a game with a skill that prevents mental conditions...

so intianlly MC isnt a loner or bullied but does think he a low self worth since he doesnt really have any friends till he joins the new workplace with others, overall story isnt that impressive and author seems to ... more>>
Spoiler

write in that MC is more popular with girls than MC thinks and naturally a harem implied like events r continuous with also, out of no ware, boss says; can either of u live at ur parents house together? No?, heres a high end apartment the govt owns, use it a live together with u new full time beautiful bodyguard

[collapse]
, in short story wise is C+, while harem like develpoments is an A-, if ur in for harem part, its worth reading. Also, seems original wn is on kakuyomu and ongoing while 54chpts ongoing? On ncode is same 54 from kakuyomu, seems author just started reposting wn there this year. edit: need to drop this down to 1 star and d- for story, b+ for harem, why the author started writing in occaisonal western woke politics to the story, clicks related or not, story is crap only thing that made this popular seems the continued harem fan service, still for harems but not this woke politics/equality propaganda woven into the story edit 2: was even worse, wn 150, story f, harem c+, just so many short and lazy woke chpts, its more cut and paste writing then intial, sad this type of crap gets serialized, future readers, unless ur harem fans and can stomach the awful propaganda story fill ins, avoid this series and author <<less
1 Likes · Like Permalink | Report

Its pretty decent, as far as wish-fulfilment novels go. The MC basically gets everything handed to him on a golden platter as soon as it is discovered that he has a supernatural ability and that it is a very unique and useful one. He becomes popular, albeit unwillingly, becomes super rich very quickly and is constantly surrounded by girls with supernatural powers who act way too close by normal standards. Although he is surrounded by girls 24/7, he does get a girlfriend quite early into the novel, so it doesn't seem to... more>> be a harem novel, at least up to the chapter I've read. I only have two minor gripes about this one. One is about the translation, It can be a bit inconsistent at times. In the early chapters there are a few times where I was left clueless as to what was happening and later on the names of the characters kept changing. The other gripe being about the pretty blatant wish-fulfilment nature of this novel. Frankly, the power that the MC obtains overshadows every other power shown so far by a long stretch. It seems like there's no limit to the MC's power and the powers of the girls around him. Comparing the scope and power of the MC's ability to that of the combat-oriented ability that the bully character has, its pretty clear that the Author went a bit too far with their power fantasy. A spoiler about the MC's ability.
Spoiler

The MC can use the Teleportation ability. He can go anywhere he wants using just a map and image of the location, and can take others with him. He can also teleport object/people to him and uses that to move billions of tons of natural gas from the oceans onto land/single handedly solving the fuel crisis that the country is in. On the other hand, the bully has an Ice-kinesis ability, but is compared to an ice-dispensing machine by the director of the project and promptly kicked out. So far he only showed the ability to make ice cubes, an ice cudgel and an ice slide. Really useless ability.

Given the scope of the MC's and his group's abilities and their seemingly limitless nature, you'd expect the bully to be able to be able to do a lot more, but the Author is really blatant in their idea of making the bully seem useless, while making the MC super amazing.

[collapse]
Overall, its not bad a bad read. Something enjoyable to read while having nothing better to do. <<less
0 Likes · Like Permalink | Report
Advertisements
Leave a Review (Guidelines)
You must be logged in to rate and post a review. Register an account to get started.