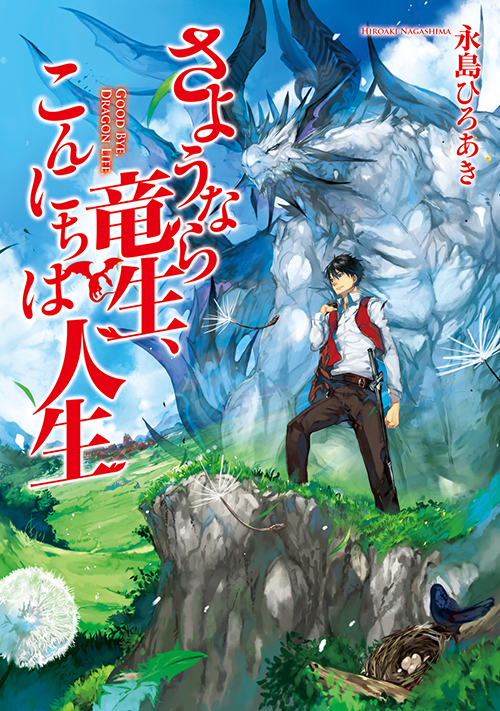 One entry per line
Nagashima Hiroaki

The oldest and strongest Dragon who grew tired of living chose to die when the Heroes came for his life. When the Dragon’s soul was waiting to drift toward the Sea of Souls, that was when it noticed it had been reborn into a Human baby.

The Dragon then decided to live a life as a Human to the fullest, and regained his will to live. The Dragon was born as the child of a farmer and lives his life in the frontier possessing enormous amounts of power due to his soul being a Dragon’s.

He then encountered the Demon of the Lamia race, fairies, Black Rose, and later entered the Magic Academy. The man whose soul is of a Dragon lives his life in joy going to Magic Academy, spending time with an old friend, The Earth Goddess, meets beautiful girls, strong classmates, the Dragon King and the Queen of Vampires.

Dragon Life (1)
Reincarnated as a Dragon’s Egg ～Lets Aim to Be the Strongest～ (1)
Semi Datte Tensei Sureba Ryuu Ni Naru (1)
Sevens (1)
It’s Because You Said There Would Be Candy!! (1)
LiEat – The Lie-Eating Dragon and the Forgotten-Color Songstress (1)

These are recommendation lists which contains Sayonara Ryuusei Konnichiwa Jinsei. You should give them a visit if you're looking for similar novels to read. Alternatively, you can also create your own list.
More Lists >>>

Interesting concept but the main character is just incoherent. At times he goes to great lengths to hide his dragon superpowers and sometimes he just blows his cover for no reason at all. The story turned out a lot more violent than you'd infer from the synopsis, but all the fights are just the MC holding back even if it endangers his friends or social position or allows the enemy to flee and prepare for another attack. Kind of similar to The New Gate in this sense, can't say I... more>> liked that one either. A more subtle but prevalent issue would be the protagonist's character. Supposedly he has lived for aeons as a dragon and has accumulated tremendous amounts of experience, but as a human he seems to be excited or impressed by just about everything, including but not limited to all of his women acquaintances' beauty and combat prowess, even though he himself should match a demigod while weakened. In addition he supposedly wants to protect his village and live a peaceful life, but either is too shortsighted to achieve this goal or just keeps making the wrong decisions, which I guess gives the author a way to show off the MC as he cleans up his own mess. As stated, he pretty much spends the first half of fights just narrating his treasured allies dodging blows, of which every one supposedly would pulverise a normal human, before jumping in to save the day himself. <<less
22 Likes · Like Permalink | Report

Ancient dragon got tired of living for so long allowed the hero to kill him. Then reincarnated to a human in which he enjoys life and still retains his ancient dragon powers which causes gods and demons to cower. A very good read.
16 Likes · Like Permalink | Report

The oldest, most powerful Dragon, he who was alive before even the gods came to be, was tired of living, letting the heroes take his life when the Kingdoms feared his power and ordered to do so.
But instead of dying, his powerful soul was reincarnated into a human's baby several centuries after his death, and he quickly finds a new reason to live. A nice story about how the MC lives a second life after an eternity as a dragon, growing, learning, loving and just living.
8 Likes · Like Permalink | Report

It's sad how this project is discontinued. The story is simple; a dragon that had lived for eons was killed by human for unknown reason. He had no particular attachment to life, so he accepted his death pretty easily. The Goddess (which also his friend) who saw his death pitied his view of life, and decided to reincarnated him as a mortal human. The story is mainly about his life as a (quite OP) human and his interpersonal relationship with many race. About how he slowly matures and discovers the joy... more>> of living through interacting with other races. <<less
6 Likes · Like Permalink | Report

A smooth read about a dragon embarking on a new life as human. There is room for interesting development in plot, but just barely leaving the expostion. Back tracking the fights are good as they are not complex, but neither are they simple, so it's easy to read for general readers. Overall it's more then your average read at this stage.
5 Likes · Like Permalink | Report

i just wanted to leave this message just in case the translation get restarted: overall it's a real nice story, however you must be ready for really sudden jump in story atmosphere ... more>>
Spoiler

one chapter he is training at a human academy while making new friends with talented people and killing average demons/vampires together, soon after he is building public baths and rest areas while thinking of how to boost the tourism and economy of his village, followed almost directly by an epic fight at multiple time the speed of light while wielding entire universes as weapon

the novel constantly jump between those three "level" of existence, the "powerful individuals" friends, the "common people" family and the "over the top god tier/destruction of the world when sneezing" enemies that pop on occasion, it can be disorienting at time

Feels like watching a long documentary of a selfless man (dragon) living in a insect world. The emphasis is on the ordinary, and whims of the commoners, as he the story happens to the mc; the MC doesn't make the story happen, he just 'is'. Like a Titan bending over and smelling a big pile of mud for the sake of being smaller than life. For me it's like a long recording of the flowers in a camp, moving with the wind, then the scenery changes to a swamp.. Then to the mountains..... more>> The thing is there is never a subject, only ordinary whims interacting with background scenery. it feels like life never changes and the only thing that remains is the status quo or the efforts​ to appreciate and tolerate mediocrity of the world. <<less
2 Likes · Like Permalink | Report

Fights are incredibly boring and drag on for ages with overly descriptive prose. Main character's "hidden power" completely drains the fights of all tension. There's not even a good reason for him to hide his power, ffs.
0 Likes · Like Permalink | Report
Leave a Review (Guidelines)
You must be logged in to rate and post a review. Register an account to get started.

Wake of the Ravager
Advertisements