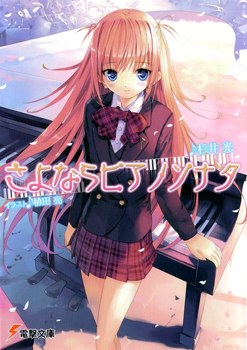 One entry per line
Hikari Sugii

One entry per line
Aka Akasaka

Status in Country of Origin. One entry per line
4 Volumes + Side Stories 1 Volume (Complete)

Naomi Hikawa is the main character of the novel, and the son of a famous music critic. Due to that, he has some musical knowledge, though it is pretty much limited to that, and perhaps the simple playing of a guitar. His hobby is to repair things, and has developed quite a good skill towards it.

One day, while going to his “secret” scrapyard to gather some spare parts, he saw a girl playing an abandoned piano there. Somehow, the music had caused the junks to resonate, creating an illusion of a junkyard symphony. He was mesmerized by the familiar sounding melody, but he could not remember the tune. Just then, the girl noticed him, and called him a pervert/stalker. She then requested him to forget about the incident.

Back at home, Naomi realized that she is the piano prodigy Mafuyu Ebisawa, who had vanished from the music scene for some unknown reason. He met her soon again, with Mafuyu as the transfer student of his class. She declared to the class that there is no need to know her too well, since she will be gone soon. She had even snatched away an abandoned music shed that he had customized for his own personal use, in order to play her guitar. Not liking her cold personality and her sharp tongue, Naomi vowed to take back the music shed from her.

Somehow, things became such that he was roped in by a senior, Kyouko Kagurazawa, and childhood friend Chiaki Aihara, to start a music band. His mission was to get Mafuyu, the required forth member, into the band. However, he soon realized the shocking truth behind Mafuyu’s reason for disappearing from the piano scene and playing the guitar. Knowing that, will he be able to forget about the melody he heard from the junkyard, or will he be able to help Mafuyu play the piano again?

Boku no Bungeibu ni Bitch ga Irunante Arienai (1)
Jaku-chara Tomozaki-kun (1)
Ordinary I and Extraordinary Them (1)
Omae wo Onii-chan ni Shite Yarouka!? (1)
The Elf Is a Freeloader (1)

These are recommendation lists which contains Sayonara Piano Sonata. You should give them a visit if you're looking for similar novels to read. Alternatively, you can also create your own list.
More Lists >>>

One of my top 5. This story have it all. Amazing and originally plot (it was released in 2007 so this basically the first of its kind). Polished and well made characters with individuality, although still fall to the common problem like overreacting and dense. Characters development and especially the romance is top class and might be the best I have seen in a while. The main story is already good but the side story make it perfect
Spoiler