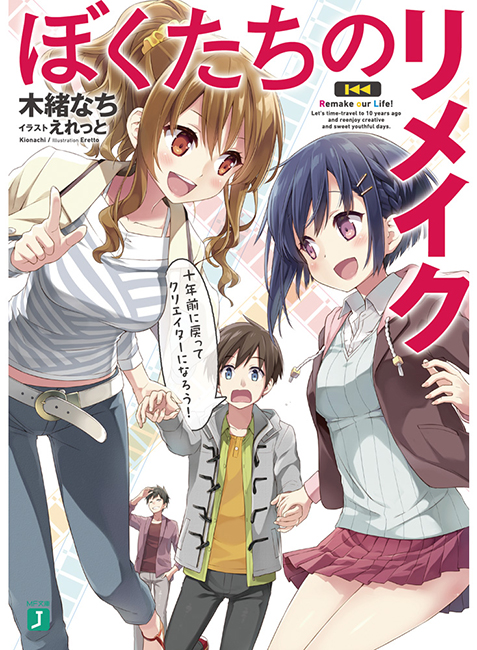 Kyouya Hashiba, who worked at a game company, had his dream shattered and decided to return to his parents’ home, but after waking up, it was ten years ago…… For some reason, he was attending the arts college that he was supposed to have given up on, furthermore, the creators that he admired in the future were his classmates!?

Why not go to JUSCO with me, Valkyrie? (1)
God of Crime (1)
God of Music (1)
The Great Storyteller (1)
I (30), Who Works for a Black Company and Died While Regretting My Gloomy Life, Started Over From High School! (1)
Sakurasou no Pet na Kanojo (1)

These are recommendation lists which contains Remake our Life!. You should give them a visit if you're looking for similar novels to read. Alternatively, you can also create your own list.
More Lists >>>

After watching the anime, reading the last parts of the manga and also reading a bit of the light novel, I can say this can be a very BIG story (haven't read the last 5 volumes since there's no english translatation yet) with multiple ramifications (either sidestories, spin-offs, etc.). I recommend watching and reading the anime, manga.
0 Likes · Like Permalink | Report

I do love reading second chance/do over novels. And I could say that even though that there's only a single chapters rn I'm already hooked up on reading this one and I honestly can't wait for the next chapters.
17 Likes · Like Permalink | Report

Found this novel through the random novel function after reading the first chapter I believe it was fate for me and it to meet since I was smitten by it instantly. There aren't enough modern day, slice of life novels being translated so finding one more unknown makes me happy!
8 Likes · Like Permalink | Report

It was surprisingly good. Each character has unique personalities and when the MC went back 10 years he wasn't completely a genius at everything unlike other novels
6 Likes · Like Permalink | Report

I read this novel while watching the anime. The story is about going back to the past and choosing different option in life. I like that MC using his old life's (?) experience to navigate the new one, so it comes as no surprise that he become someone reliable. ... more>>
Spoiler

However, he is so very important that the life of everyone around him changed "because of him" (at least he thought so). He feels responsible because their new life is not as accomplished as it supposed to be (by his standard).

While I think it is partly true that their life changed because of his existence, but it's not like those character doesn't have the ability to decide for themselves. And who the hell is MC to judge which life is better for others?

In other word, MC is a self-centered shallow dud.

[collapse]
Otherwise, there is nothing new. And I hate harem. <<less
5 Likes · Like Permalink | Report

Way more enjoyable than I thought it would be. I usually don't enjoy novels that are about school life+ecchi because most seem feel like copy paste novels. But this one has a fun story, the characters have proper personalities and the ecchi isn't over the top. Defintely worth reading.
2 Likes · Like Permalink | Report
Advertisements
Leave a Review (Guidelines)
You must be logged in to rate and post a review. Register an account to get started.