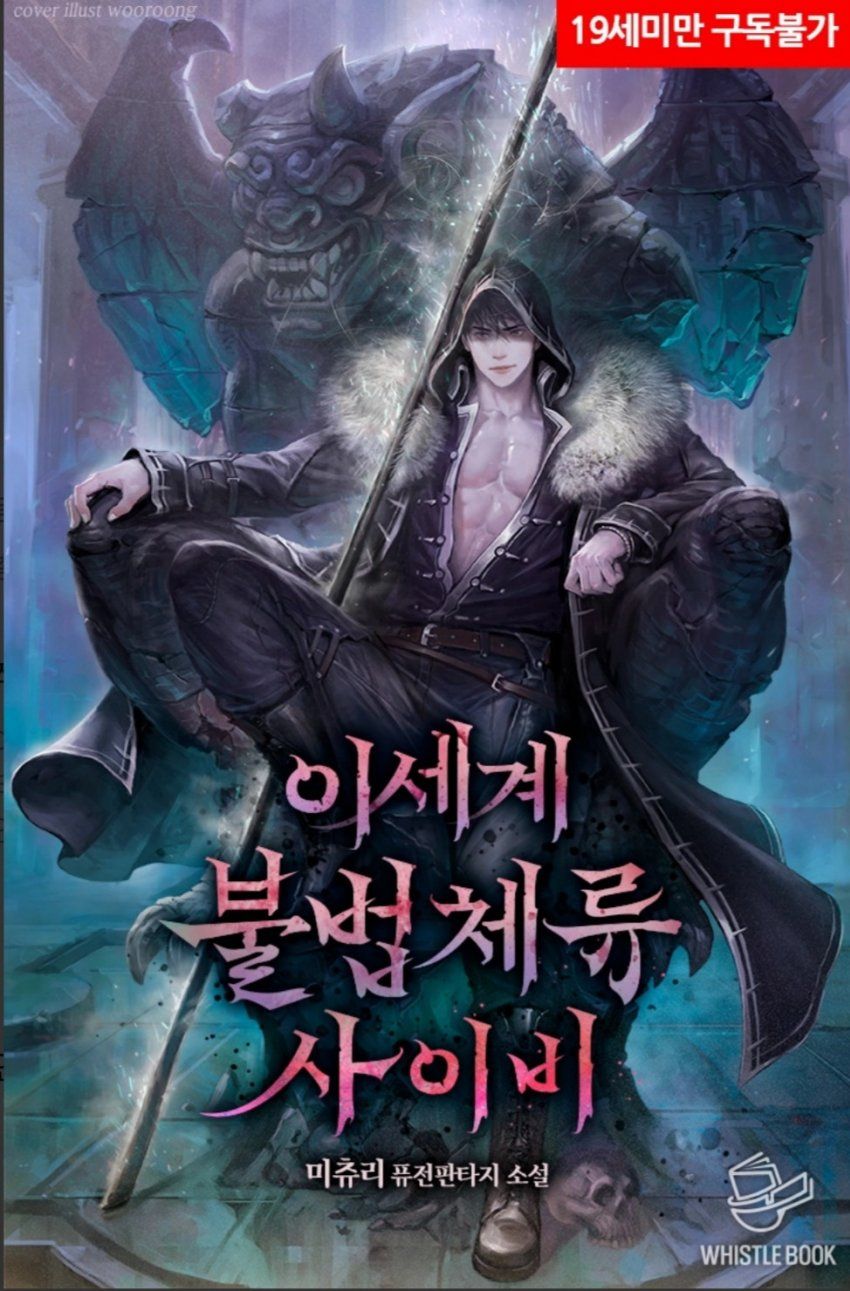 One entry per line
미츄리

Status in Country of Origin. One entry per line
629 Chapters (Completed)

One entry per line
joara

One day, he suddenly fell into a world of barbarism and superstition.

These are recommendation lists which contains Pseudo Resident’s Illegal Stay in Another World. You should give them a visit if you're looking for similar novels to read. Alternatively, you can also create your own list.
More Lists >>>

It's an isekai story, but not usually overpowered from the get-go troupe. The MC is likable enough, and the character development is good. And, yeah, it's harem. The MC starts off as a s*ave in the other world where his life was, let's say simply terrible. He couldn't even fill his stomach. Prior to that he was forcefully transported to another world by a random hot girl he met in the streets. There will be R-18 scenes in the story, but that will take a while, so gotta be patient.
Spoiler

DON'T GET FOOLED BY THE TITLE CHILD-MAKING DATE WITH LUNA, ITS BULLSH*T!

Accolades: 2020 Joara Novel of the Year Many Korean reviewers hail this novel as one of the best R-18 novel of all time.... more>> It's critically acclaimed for its lifelike side characters and well-developed worldview. One of the few adult novels which won 'Joara Novel of Year' accolade as it's rather rare for an adult to win it. Even though the novel is tagged "Adult" it's heavily plot centric. The only reason it's tagged as adult is because the love scenes are quite explicit. There are 30/435 r-18 chapters. Also, there is no NTR or NTL (Netori) here. It's heavy on the comedy aspect, as it's satire to racism in the intellectual modern society. Our MC starts off as a s*ave and is ostracized as a savage due to his skin tone and hair color but by the end of first arc he frees himself from s*avery, which is in upcoming 3 chapters. He inherited a medical and survival techniques from his father he was supposed to take over his family clinic in the near future until one day he meets a cultist woman and gets his ass transmigrated. There are three Key Reasons why this won the 'Joara Novel of the Year' previously won by 'Regressor Instruction Manual'. 1. Exceptional World Building
Spoiler

Elements such as fantasy, magic, medical practices beautifully intertwine with ancient concepts such barbarism, superstitions, voodoos and religions. I have never seen a novel where religions play such a huge role as this one. Most of the time, they are pretty irrelevant. Religion and cultist aspect of the novel are inspired by Greek. Irish and Norse mythology, and author researched them quite well.

Author also definitely did his research in medical terminologies and knows what he is writing about. As MC becomes the adventurer with the sole intention of someday owning a clinic in this savage world.

MC goes through a lot of adventures and the world is portrayed quite beautifully. He travels from seas to volcanoes, from abyssal ruins to labyrinths.

There are many novels where character development is mostly geared towards MC's strength. However, here MC develops both in personality and strength.

It's not sudden growth rather a gradual one which is one of the aspect critically acclaimed by Korean reviewers. Also, the author balances the comedic and darker tones quite as well. During his journey there are quite a few occasions. The constant ostracization annoys our protagonist.

Slowly his background gets revealed how he ended up as s*ave and what darker he had to go through. Overall, his final growth, both personality and strength wise is a satisfying read.

The novel has a set of charming side characters who have their own unique traits, from a Bald, castrated and Vegan Elf Monk who gives off Murim (martial) master vibes but in reality is weak as sh*t against monsters to a Quack doctor whose actual degree is in Theology, even the mob character leaves their impact in the plot.. We got a bald villain who is superstitious af and believes he is bald cause he is son of the Sun God.. And he blinds his enemy by reflecting sunlight using his bald head.

There is a bard who exaggerates MC's strength, and makes the people fear and ostracize him even more so because of his barbaric tales.

Heroines each goes through their own character development and have their set of beliefs they follow.

One of the unique aspects of this novel is unlike other harem author worked hard to portray as realistically as possible. Some might say harem itself isn't realistic, but you will need to see what it fits the context and world setting better.

[collapse]
I would warn people who can't look past their preconceived notion of harem to avoid this one. As for those who want to explore new avenues give it a try have patience if you like any of the aspects of this novel in any form stick to it. By the time you reach sencond half, you will understand the message author tryig to convey and why it won novel of the year. <<less
44 Likes · Like Permalink | Report

Like what I've seen so far, MC gets transported to another world (reason still unknown) and starts there as a s*ave, he uses his medical knowledge he learned from his father and earn enough money to set himself free and start his adventure. The characters are fleshed out well and MC seems rational and smart. There is also a tinge of mystery about his powers, past and how he came to the world.
The world settings seems very deep, there are layers upon layers of things to be unfold that we... more>> don't know yet-the gods, curses and more.
No insane info dumps, the comedy is also better than I expected (I also adore those pokemon references). There are a lot of references to the mythology so I wonder how all those are connected to each other. The novel is the first work of the same author as "Taming The Villianesses" and I am happy that we get to read another masterpiece by the same author. It had also won 2020 "Joara Novel of the Year" which is pretty impressive for an R18 novel, so I'm very excited for the future. <<less

I am really enjoying this novel so far. Its rare to find a relatable MC in an R-18 and harem novel. He doesn't find himself in overtly convenient situations that lead to smut, he is not even particularly attractive enough to make all the girls drool over him, and although he seems like he'd gladly jump at any tempting offer presented to himself, his self-worth isn't low enough to simp. He just wants to live comfortably in the barbaric world. The side characters are all distinct, and they're a variety of people... more>> of different age, race, s*x, etc. So not only women. They all have their own unique traits, hobbies and dreams.
Spoiler

The group dynamic of the first party MC joins is gold; their interactions and the situations they find themselves in during their first quest always manages to make me laugh.

[collapse]
From this, I can tell that the author has a knack for writing comedy. The world-building is well done. Because the MC was a s*ave, he has little to no knowledge about the world, and because he is isekai'd, he has no place within the world and everyone just assumes he is a barbarian because of his build. Its really interesting to experience the worldview through the eyes of someone with no connections and no plot device teacher/guide figure. He has to put effort into gaining the knowledge he needs and its not given to him on a silver plate. If you like a novel where the MC grows gradually as he and the reader learn more about the world and a story that takes its time with building character relationships while being filled with hilarious character interactions, I'd highly recommend this novel. Also a bonus is that there are beautiful illustrations of the heroines and the MC. <<less
6 Likes · Like Permalink | Report

Overall this is a read for someone who wants something new from the typical isekai It's a pretty interesting isekai, a little more focus on the world in a societal sense (this is from taking a typical isekai as the standard). Uses the roman/greek pantheon with some add ons for the religion /power system from what has been seen so far. The characters are interesting and act based on their character and not based on plot convivence.
4 Likes · Like Permalink | Report

The first few chapters of this novel might be a bit weird, it's mostly because of the lack of context on the world building and how you just suddenly got thrown into this with only the barest explanation on how it happened. But after you went past the s*ave arc, which is the first arc of this novel, you'll start to get into the real story. If the s*ave arc is to build up the character of the MC, and give explanation on how he ended up as this character, then... more>> the next arc is to flush out and build up more of the world. The world building is really great, the author did a great job at making his world more realistic, similar to the world of Europe during the medieval ages, except with magic and other fantasy stuff. The author exquisitely used the MC's limited knowledge to add tidbits of information each time without dumping whole paragraphs of information at you. One of the main selling points of this novel, imo, is the character interactions. From the first few chapters of interactions, I'm already loving the characters that the author wrote. They are unique and funny. Each of the have this sense of comedic and exclusive personality without them losing their realism. Even without the above mentioned, I'll still recommend you to read it just because of the massage scenes. They are some really really nicely written scenes that you'll regret if you skipped it. 100% recommended. <<less
3 Likes · Like Permalink | Report
Leave a Review (Guidelines)
You must be logged in to rate and post a review. Register an account to get started.