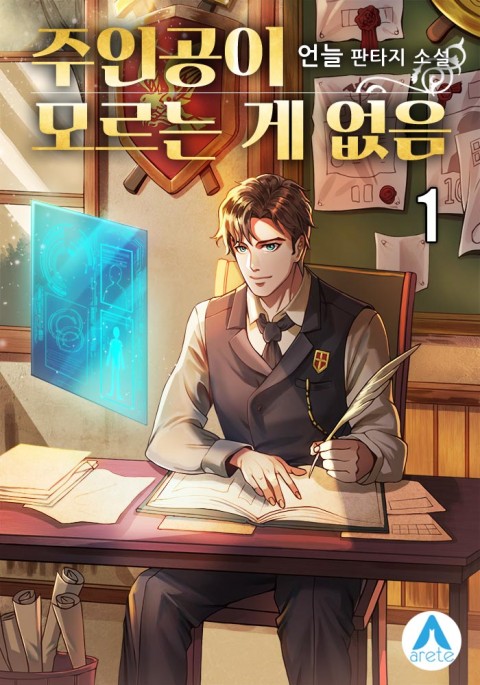 One entry per line
언늘

Status in Country of Origin. One entry per line
228 chapters (complete)

One entry per line
Arete

Before he tries to use the weapon properly, he suffers an unexpected accident.

When I open my eyes, a completely different world.

But I can see everyone’s personal information?

No point in hiding it. I know everything.

I’m the Villainous Guildmaster of an Adventurer’s Guild – I Just Banish Useless People to the Right Places, but for Some Reason They’re Really Grateful to Me “What? You Want To Come Back to the Guild Now? You’re Not Ready Yet, You Can Do Your Best There.” (1)
My Civil Servant Life Reborn in the Strange World (1)
The Guild’s Cheat Receptionist (LN) (1)

These are recommendation lists which contains Protagonist Knows Everything. You should give them a visit if you're looking for similar novels to read. Alternatively, you can also create your own list.
More Lists >>>

The MC is OP in a sense but obviously not physically OP. He's dense when it comes to relationships. His powers are good but really feels like a plot armor imo. The story is okay but feels lacking but I can't pinpoint what is lacking. Although it's clear that the MC will end up with Kasha I hated it (my personal preference only). I liked Aquila better than the obsessive loli Kasha. I dropped the story since I cannot stomach anymore about Aquila being rejected unconsciously by Tay. Kasha's personality is like... more>> those lolis I hate on mediocre Japanese novels. I wasted my time reading this when the pairing and action is not to my taste. Again, this is just my personal preference. <<less
0 Likes · Like Permalink | Report

Felt great at first, but something began bothering me and (un) luckily I realized this little chapters in what.
... more>>
Spoiler

Fitting the title, the MC himself believes in his knowledge. I am not talking about the personnel info records he has the moment he meets people. It is his way of dealing with people and situations.

To understand a bit, this is a man from modern Korea and dying after an attempt from his boss to get rid of him had the MC leave his post mid shift to take the USB and info on it to have a reserve weapon info. He dies when crossing the street and wakes up in a typical JRPG medieval Europe times expy fantasy world with magic and adventurers guild. He is already signed up to be a recepcionist and takes to it like a fish to water because in his last life he worked in the modern normie world equivalent, human resources.

In this world, where the law is a weak thing, nobles are present (his boss is a child of one, and bigger and stronger rival guild's cruel leader is also a child of the same noble and both have different names from each other as well as the father for an example), adventurers work purely for money (Korean novel, all the different motives come from what they want the money for) and magic and weapons are always near even noncombatants because even a single city can have multiple guilds with plenty of adventurers. In this world, where society should be this flimsy facade of human solidarity only held onto for convenience and violence being an answer in many situations, insults and still be largely present in even official situations like say duels our MC treats every person he meets like they were fellow modern career working Koreans.

What makes this jarring is that he interacts with plenty of "shady" people and mouths off to powerful adventurers and status holders like the aforementioned cruel leader of a rival guild without any reserve at all. You know, like none of them would jave some minion slit his throat in the dinky little alleys of the town he works in the moment he was out of torchlight. As if privileged and powerful people need more than "finding" a mauled or drowned body that fits his description and he happens to be missing. Or even just have him disappear outright. There's no police force after all and who would pull an army for that kind of stuff?

A moron traitor for both sides (MC guild and rival guild both manipulate him easy) gets off with a beating from the supposedly callous guild who lost big due to the traitor's s*upid actions and that's it.

My suspense of disbelief strains at human behavior in a supposedly backward and ruthless society where the bigger sh*t is monsters and rival nations being this similar in practices to modern shady companies. The author f*cked up. I don't know whether this came out before or after a well written novel like Regressor Instruction Manual, but despite the intriguing novelty of a new facet on old tropes, the poor execution leaves a bitter feeling for having read it when the novel hasn't had time to get much of anywhere.

And it moves fast. In the 21 chapters so far, we had multiple clashes of MC and local rivals of his boss and MC already angered the rival guild leader to the point of leaving an impression (starting the process to poach an asset like a veteran A rank adventurer will do that) and even argues with said guild leader on a adventurer's guild conference called because of an S class quest (apparently it takes 200 A rank adventurers to do it, which is why many guilds are called).

Why did I mention Regressor Instruction Manual? Simple, it does the job so well at MC separating his treatment of people. As a competently written social manipulator (he has flaws, for instance, his tricks are weak or don't work anything like he wants when the target is a very pure person, emotional instead of rational in their decision making or their interests have nothing to do with motoves he recognizes like money, power, ideals and social connections) he treats other modern people in the new world like they all expect and converses with locals in respect to their positions (while kind to servants and humble people, locals would instead be unnerved if his behavior to them was exactly like how he behaves towards other modern born and bred humans just like how modern humans would be creeped if someone among them stsrted using noble titles without locals around or something like that). A mask for every occasion and when he is direct and blunt it is carefully calculated and used for shock factor when he needs the person opposite him to be thrown out of their natural rythm and be confused and pliable.

Couldn't take it anymore how this was done here in PKE. The MC is a hammer instead of a scalpel and constantly uses modern company slang (odd the author makes him aware of this slip up too late every time for it to be a joke on poor writing so I can only see it as a running joke given the people around him only go What? And then dismiss it and never ask him what he said ever again). His personality is actually quite similar to an OP MC bulldozing through obstacles and everyone getting swept into his pace rather than fitting his true abilities of a cannon fodder and a mere recepcionist in a guild.

So this is my review. Maybe it will change or the author will introduce reasons for why the MC's completely incompatible cultural background he can't and won't suppress works when directed at people raised in an entirely different world and culture and time works like it would back home in the lawful and relatively peaceful 21st century.

As is, this looks like a mere amateur attempt to mimic a diamond with muddy glass using the standard arrogant OP MC template of usual novels that doesn't match with his life experience and abilities not more than one bit. No idea on how accurate the HR experience MC uses is, but it should not work at all for MC in his new world, and especially not for this long (in setting, it has been weeks if not a few months).

Seems interesting a new take on isekai, the MC is not the usual plot becoming an adventure but a receptionist of a small guild.
15 Likes · Like Permalink | Report

The "seeing people's status" premise isn't something new, but so far it seems like the MC is competent and knows how to maximize the effect of his information. The story has good potential and I'm looking forward to reading more. By the way, Greater thunder's review has major spoilers, so read it at your own risk.
11 Likes · Like Permalink | Report