Novel Updates
RegisterLogin
Theme
Search
Your changes has been saved.
Advertisements
Please Save My Child

Home >
Novel >
Please Save My Child 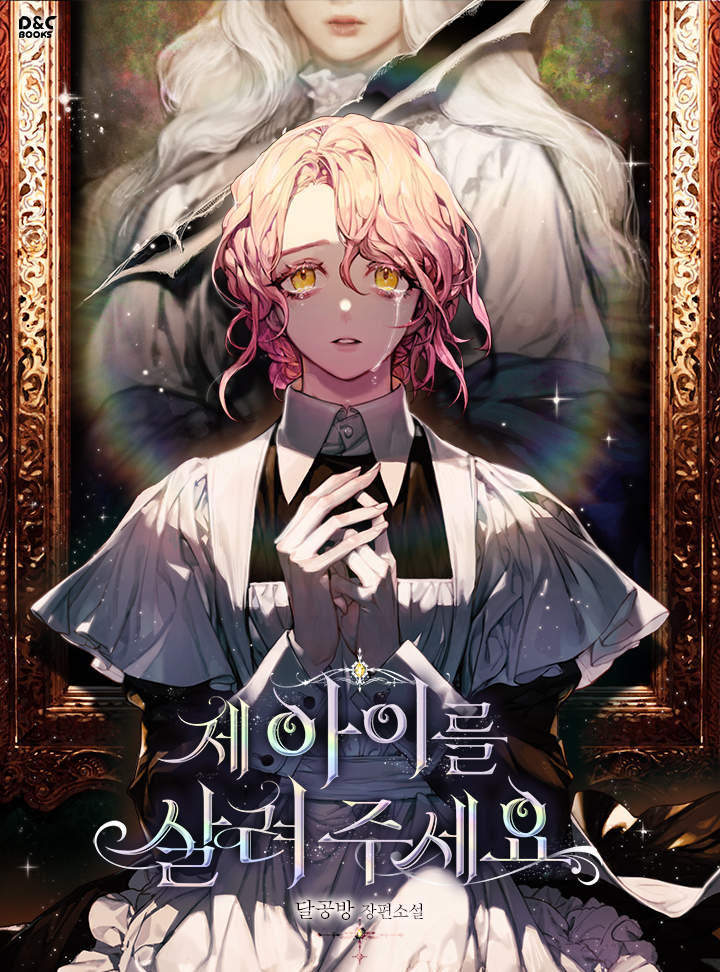 One entry per line
82PIGEON
김피죤

Status in Country of Origin. One entry per line
200 chapters (completed)

Eugene has reincarnated into the body of “Reina,” a single mother with a daughter. Luckily, the confusing transition only lasted a short while, and she adjusted to her new world quickly.

After she had lived for 4 years as “Reina”…

She suddenly receives a threatening message informing her that she must kidnap the Princess of the Duchy if she wishes to have her daughter back.

As she sinks into her despair, she suddenly recalls a certain novel she had read before.

A character who was arrested and executed after being blackmailed by an unknown villain to kidnap the heroine.

A character who was merely a tool in confirming the love that the heroine’s father held for his daughter.

That’s what “Reina” was destined to be.

“There are enemies who intend to kidnap Lady Estelle.”

“I-I can help you capture them.”

There was a long silence.

Reina nodded and unfolded the small piece of paper she had hidden in her apron pocket.

“The person who intends to kidnap Lady Estelle wrote this letter to me.”

As soon as the duke reached out his hand to take the note, Reina quickly hid the note in her pocket. She could see the rising anger reflected in his eyes.

“In exchange, I would like to make a request.”

She holds back her tears as she continues speaking.

“Please save my child.”

Female Lead’s Mother and Male Lead’s Dad are Married (1)
Husband, Wanted (1)
I Am Trying To Divorce My Villain Husband, But We Have A Child (1)
Please Take Care of the Baby! (1)
She’s Not Our Daughter! (1)

These are recommendation lists which contains Please Save My Child. You should give them a visit if you're looking for similar novels to read. Alternatively, you can also create your own list.
More Lists >>>

Good setup. Reina (MC) is shown to have flaws that are extremely reasonable, and so is the Duke (the ML). Estelle (ML's kid) has a traumatic past where she grows close to MC who is the only one who is kind to her as an adult, instead of a servant. Bonita (MC's kid) also has supposedly a traumatic past but due to poverty, she is shown to have matured much earlier. ... more>>
Spoiler

There is also foreshadowing before the kidnapping how ori-Reina might've been tempted, but the synopsis gives it away already

The line where he says that "I'll show as much consideration to your child as you have shown to mine" is a good description of his character and while the MC's actions are done out of fear of imminent death, her reaction towards Estelle later is a good character growth

[collapse]
While this is early to rate, the translation is really excellent & so is the story writing. The starting has just been established and it will be really nice to look forward to. Will update this later on <3 <<less
11 Likes · Like Permalink | Report

Really enjoy this so far!
MC is rational and loves her child. She also treats the duke’s daughter well because they both understand what it means to go hungry and worry about livelihood. Duke seems scary but is a doting parent. My theory is that
Spoiler

MC and her daughter are the missing wife and child 🤔

This story shows a struggling mom giving it her all for her child and caring for another as her job. It's really beautiful to read how much she loves her and also very sad how desperate she is when she got kidnapped. It's also fun how the kids are becoming friends and are very alike. Both mature and through a poor quality of life. This story really plays with your emotions and I can't wait to read what secrets are hidden, how the cold duke will learn to love. How their relationship... more>> will slowly improve and all the adorable family moments. Which is what I'm here for. Recommended for sure <<less
7 Likes · Like Permalink | Report

I don't think I have ever read an isekai novel where it portrays such an amazing and healthy mother-daughter relationship. Reina loves her daughter. She loves her with all her heart. I think maternal love is such a difficult thing to understand because how do we even describe how much we love and resent our mothers? My mom is one of my favorite people--she is also one of the worst. Reading it from Reina's perspective makes me feel like I'm listening to my mom. ... more>>
Spoiler

The reason I'm saying this is because it's very easy to relate to Boni (Reina's daughter). I love and adore my mom. I wish she was better in my childhood. She did the best she could. She did not do enough. My mom loved me the best she could, but she loved me differently than the children she watched over, and sometimes I was horribly jealous. How come they got to see my mom without struggling like I did? How come they didn't see all the raw and human emotions she had like anger and rage? How come I have the worst and best parts of my mom in my very DNA, but they only saw her best?

It's clear to see the different relationship Reina has with Boni and Estelle (the Duke's daughter). There's nothing wrong with it. On the contrary, Reina is a wonderful maternal figure to Estelle. But it's easy to see from Boni that Reina and Estelle's relationship will always be different than her and her mom's.

The author portrays all those complicated emotions very well. Additionally, Reina is poor. Because of that, Boni has had to sacrifice her wants and happiness for financial stability. That is a little too real. The author does any amazing job of writing Boni's refusal for nice things because she knows that it costs too much money. The sweets she adores are expensive, so she pretends to not like them. It's such a good and realistic portrayal of a kid who has lived through a financially unstable time.

[collapse]
I don't know what else to say besides the fact that I adore this novel. Truly one of the best I have ever read. <<less
6 Likes · Like Permalink | Report

I really really like this. It's not just fluffy there's a bit of a mystery too. I'm eager to see where this goes but there are still 180 chapters left to be translated. I'll give this five stars for now.
2 Likes · Like Permalink | Report

The translation is really nice, although there are parts where I'm confused... So I'm not sure if its because of the translation or the actual novel, but there are bits and pieces where it did not make sense to me... scenes like: ... more>>
Spoiler

After the Mc's daughter was kidnapped, it seemed like it took a week before the daughter was found. But, when the daughter was found, she said "... today". Although it wasn't explicitly said that days have passed, you get to know this because the Mc's maid friends were worried cuz she lost a lot of weight while waiting for her daughter. I don't know if one can lose a lot of weight in a day, so I thought that it must have been at lest 3 days since she started worrying over her daughter.

[collapse]
honestly it might just be my exam exhausted brain that cant quite get this lol. I find the flow of the story... ok. I like how its sort of straight to the point, but to me it sometimes seem to be super fast. But the MC and her daughter are great, especially their mother-daughter scenes. I think these scenes are the highlight of the story cuz you really feel the emotions that the MC feels, just like when her daughter is kidnapped. Although I cant quite say I like the ML and other characters. Honestly aside from the ML and his daughter, there are no other relevant characters. MOst are just mentioned as "butler" or "maid-friend", and you don't really get to see them unless they are in scenes where they need to. The ML, yeah, I don't understand why he seems over the top with anything regarding the MC. Cuz aside from the MC resembling his wife just because she has a daughter as the same age as his, and her great care for her daughter, I cant quite see why he feels the need to give her a billion other than him not having common sense on how to treat others and how to reward them. But I do find this aspect to him rather cute. And I'm shocked how everyone in their mansion is just "shocked" and doesn't have anything to say or feel on how the duke treats the MC. For the Ml's daughter she is very cute, I like her. But she doesn't seem to have much going on for her for now. cuz we just get to know that she adapted, made friends with the Mc's daughter then that's that. Her relationship with the ML is just kinda mentioned or shown a little. Hopefully the novel will later on mov on to that. But this was a good read, it was had some heartwarming moments and such. But I dont think it has the best writing so far. Though I think the story has some grand conspiracy thing going in the background, so I kinda wanna know about that.
Spoiler

yeah its sus how she know noble etiquette even though she was commoner from birth. Maybe her mother taught her? but why would a commoner teacher know and teach noble etiquette? And a mother and a child who dissapered, and we have a mother and a child here who the ML unknowingly favors. I dont think that they are the real mother and daughter (well their bodies not theirs at least), maybe "eugene" was actually Ml's wife. Cuz if they are the real mother and daughter, then who is the ML's daughter, and why does the MC remember "reina's" memories as a child, and why cant the ML recognize their faces... well that is unless magic is involved I guess.

I wanted to give it a four, but the plot twist that I saw at the end was good enough to give it a five! It was different and unique. And I liked the Bonding of the four characters. They had a sweet relationship
1 Likes · Like Permalink | Report
Advertisements
Leave a Review (Guidelines)
You must be logged in to rate and post a review. Register an account to get started.