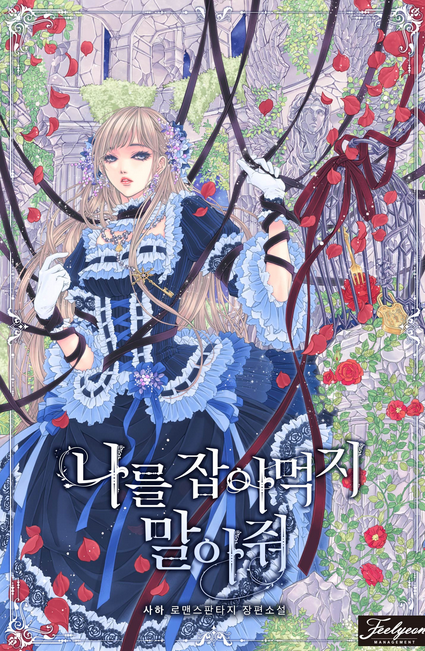 One entry per line
Saha
사하

One entry per line
Pepper
페퍼

Status in Country of Origin. One entry per line
138 Chapters + 4 Side Stories (Complete)

She reincarnated in a 19th-century male-oriented fantasy novel. But there was no heroine in this nasty and brutal B-rated dramatic story.

It’s because he had killed everyone.

In this hopeless story devoid of any dreams, she was destined to be eaten alive by the protagonist. But before she could even meet them, her house was ruined.

Be devoured by the protagonist, or starve to death?

After much agonizing, she decided to sell herself.

The main character sealed the deal with a price of 5 billion Marcas.

It’s not such a bad deal for both the hero and her.

“How could a woman who sold herself in the slums be more important than the Emperor’s name?!”

The voice belonged to a young knight. The other knights hurried to restrain him, but the beans were already spilled. The captain of the knights apologized with a cold sweat.

“I apologize, Your Grace. I have nothing to say. This is all due to my incompetence.”

Zahid drew his sword as he spoke gracefully.

While the knights were at their wits’ end, I approached Zahid. He glanced back at me, before turning back to the sword’s blade that shone in the moonlight. I reached out to him.

“Give me the sword.”

I looked directly up at the knights that spoke such insulting words.

These are recommendation lists which contains Please Don’t Eat Me (Saha). You should give them a visit if you're looking for similar novels to read. Alternatively, you can also create your own list.
More Lists >>>

How good. Both the FL and ML are smart and interesting so far. There are no strange/exasperating misunderstandings. The FL is catious but brave for the sake of her siblings. And the ML is cunning and slick. He knows he's attractive and uses all his tools for his disposal. He's also never been cruel to the FL which is a BIG PLUS. The translation is excellent. When I read these novels I have no problem dropping them if the translation is bad even if the story might be good. I'm very... more>> happy to say that I don't have to worry about that at all in this case. It's truly good. <<less
10 Likes · Like Permalink | Report

It's hard to give a review when only 2 chapters are out, but I'll try anyway. The main character has reincarnated into a novel. Meanwhile, the male lead is the original protagonist. Unfortunately, the original story was pretty dark and involved the male lead eating the original version of the female lead.
Spoiler

[collapse]
Anyhow, the way the first chapter was written hinted at future smut. Hopefully it's not just a gimmick to get me interested.
8 Likes · Like Permalink | Report

Fun story sort of an "Enemies" to Lover's contract marriage set up. With an actual plot outside all that. Ertha Arles:FL
Very realistic and smart. She didn't get around to finishing the book in her last life for she was too grossed out by the gore and violence, so her knowledge is enough to know the characters, not the endgame. In the original story, ... more>>
Spoiler

Ertha prostituted herself to pay off her family's debt who was only able to retire when her younger sibling's powers awaken at 15 becoming the Fire and Wind Wizard. She becomes a minor vengeful antagonist first enacting revenge on her former boss and clients and then just getting a big head and taking advantage of those around her. Then she drugs the ML (because he's hot) unknowing that he was also a wizard and she was the purifier. So in a drugged madness he literally eats her alive.

[collapse]
Because of this her freaking out about ML advances is hilarious. Zahid El- Carno: ML
A Duke who is the ultra wizard with all 4 elements. Is described as a devil by his butler Dimon. He gives Ertha a marriage contract to monopolize her from other wizards and plans to seduce her so she will never think of leaving him. Bit of world Building
Spoiler

In this world there are the 4 wizards (4 elements), holy powers, and the purifier. Every generation there are 4 wizards and one purifier. Wizards need a purifier to prevent corruption from magic but they also have a drug effect. Think morphine addiction. This setup was just the book's way to keep up a conflict between wizards. Wizards need to have some contact to feel its effects, the deeper the better. That's why Zahid eating her in the book was a plus for he completely absorbed Ertha's powers, and that's why she is still scared of him in the story.

[collapse]
Translation fine. The biggest problem is the inconsistency of Ertha's younger siblings Charles and Ethan. They are fraternal twins but Charles's gender will keep changing. If it wasn't for the comic I would never have been 100% sure Charles is a girl. <<less

This is really quite decent. The main character is extremely promising; she's weak, but she knows her weakness and she knows better than anyone the heart of the ML. She's defended against his beauty traps and determined to escape from him. Furthermore, given how KR webnovel translations are often very very wonky for some reason, this one is extremely smooth. I'm excited for more chapters.
3 Likes · Like Permalink | Report

FL knows the story since she has read it though not super thoroughly. She’s a nice girl who loves the little twins of the original owner of the body so she decides to approach the apparent terrifying duke/protagonist of the story. She’s a reasonably smart and calm girl though she’s still a normal girl who can get flustered. ML in the original story is a cunning / self-interest driven / ruthless man who doesn’t feel things like a normal human. We see that he certainly IS cunning and sly in this... more>> version too but he’s actually quite playful. He’s VERY VERY good looking + charming too and he knows it too so he’s naturally quite a tease. I can’t tell if he genuinely fancies FL yet but he’s been quite friendly/doting so far so I assume she has caught his interest for reasons beyond her special constitution. The two little siblings are super cute. <<less
3 Likes · Like Permalink | Report

Mannn! So, we're up to Chapter three finally! I'm really enjoying this so far!! The story is great, and the characters are interesting so far! I really like the way the translator has put this together in English! Beautiful job. No spoilers here~.
3 Likes · Like Permalink | Report

I'm actually in the middle of reading the 10th chapter but had to hurry on over here to write this because of a line in the novel that was so beautiful and poignant ... more>>
Spoiler

"While I received a small bit of comfort from the intertwined hands, I did not lean on the warmth emitting from it.

I knew how useless that warmth would be"

[collapse]
That was the FL's POV. See how strong, how level-headed she is? This is the FL we deserve, brethren!!! Though we know the ML is a sociopath. But I have the tiniest glimmer of hope that something in him would open and break to let our Ertha in. <<less
2 Likes · Like Permalink | Report

Highly recommend! The chapters are long and it gives you as sense of fulfillment after reading it. FL is smart but careful. I get why she is like that, you can never know what people are actually thinking inside the novel. She is cautious but daring. ML, what can I say, hot damn. &Lt;—— this should get you to read. Like seriously I mean it.
2 Likes · Like Permalink | Report

It's just like the ONE! It hooked me right at the get go. Just read a few chapters, and fell in love with it right away. If this was a date, I'd say YES at the first meeting. I honestly feel this has a great potential and worth waiting for. The plot is good. Both MCs are SO smart and cunning. That's a HUGE PLUS. The story is well fleshed out. I'm looking forward to what will happen next.
2 Likes · Like Permalink | Report

We're finally onto ch 8 and we're at the cusp of a development. I foresee bickering and fighting for the fl. The translation is smooth and easy to read. Characters are interesting and quite heartwarming. Looking forward to further updates! Would definitely recommend
2 Likes · Like Permalink | Report

I just love it, but was it dropped? There are smart (+/-) FL, cute relationships, interesting plot Can't wait for update ?
1 Likes · Like Permalink | Report

I really like the story. I like her siblings too! They are so cute, and they really really love her. I don't know if the ML is gettinh to like her this fast? Or it is just for the sake of keeping her xd.
1 Likes · Like Permalink | Report

Do they drop it, omg I love the novel so much, very cute and smart FL. It has been a while they didnt uodate
0 Likes · Like Permalink | Report
Advertisements
Leave a Review (Guidelines)
You must be logged in to rate and post a review. Register an account to get started.

The Conflagration of Tormented Wizards [魔法使いらの苦難]