Novel Updates
RegisterLogin
Theme
Search
Your changes has been saved.
Advertisements
People Made Fun of Me For Being Jobless but Its Not Bad at All 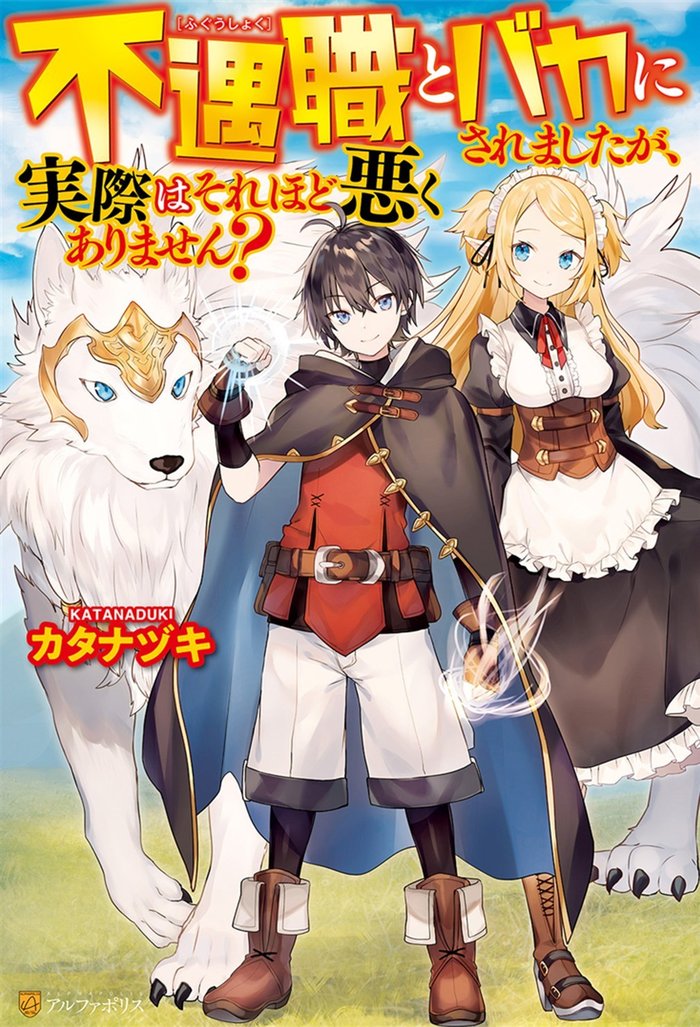 One entry per line
Shugao
しゅがお

Shirosaki Reito was suddenly sucked in by a mysterious rift and got transferred in between dimensions. He was reincarnated as a baby in another world.

He was born into the royal family and was heir to the throne, but he was driven out of the palace.

Since he was born as a Support Magician and had Alchemist as a job which was the lowest job that existed in the new world and people who had that were considered jobless.

But there was a secret hidden in that job!! From jobless to the strongest job!!!

One entry per line
Fuguushoku to Baka ni Saremashita ga, Jissai wa Sorehodo Waruku Arimasen?
NBAA
People Made Fun Of Me For Being Jobless But Its Not Bad At All
不遇職とバカにされましたが、実際はそれほど悪くありません？

I Was Reborn, but I Was Told That the Popular Standard Skills Were No Good, so I Chose the Skill of Collecting [Title] (1)
That Time I Got Reincarnated as a Disappointing Prince (1)

These are recommendation lists which contains People Made Fun of Me For Being Jobless but Its Not Bad at All. You should give them a visit if you're looking for similar novels to read. Alternatively, you can also create your own list.
More Lists >>>

I just want to ask people that always comment on these MC being reincarnated as a baby after living 15-20 years on earth and after becoming teenager in another world he still behave as a teenager but his actual mental age should be 25-35. But you all don't stop for a second and think his tal age has grown but he never get any experience for the age for his 20's, 30's. That's just saying he has to live like what he didn't know about. Let's take an example from this novel,... more>> MC died when he was 15. That's mid teenage and reincarnated as a baby and start over again till he reach 14-15. So his mental age is 29-30 but he never experienced what's is like to live beyond 15. How do you know what's a 21 year old can think when you never experienced anything for 21 year old... He will start developing after 15 which will be the experience he will get to live late teenager then 20's, 30's and so on. It's pretty frustrating that many people will assume MC should act more mature like in his 30 while he not even knew what's it's like to live life as 20. <<less
0 Likes · Like Permalink | Report

I love it so far. The progression in the first few chapters is well done.
Spoiler

The twist with the maid being a dangerous assassin also makes things much more interesting.

Basic. Only read when you have nothing else to do. Reading through the first volume, I can say for certain that the author's intended audience are very young readers. You can actually feel the author dumbing down the story to make it as simple and cliche as possible. The reason I say this is that: ... more>>
Spoiler

The MC gets "sucked in" to another dimension at the age of 15 (Earth age). At this point MC would have already learned about geography, basic biology and chemistry. I remember already learning about the periodic table and participating in simple lab experiments such as burning magnesium strips etc. So the MC definitely has a substantial amount of knowledge leverage over the people living in this medieval magical world and yet he does nothing to make use of it. Hence my conclusion of the author simplifying the novel.

But ok no big deal, I'm not the target audience. Turn off brain and just read, no worries.

My biggest gripe however as always with these kind of novels is that MC transmigrates at age 15 and becomes a baby. Towards the end of the first volume he is age 14 in the other world.

You'd think his mental age is that but it isn't... It still feels as if he is 15 which doesn't make sense and hence became boring to read. Because there's no complex thinking or plots available when you have an MC built this way. It is for certain at this point till the eventual end of the novel that the story will have a fixed setting and a flawed MC. A very shounen novel for young kids to read.

Logic is non-existent in this story but it has good pace and relatively fresh plot. So if you can ignore issues with logic - it's decent
Spoiler

MC - trained by experienced assassin. He defeats powerful thief/assassin first day after coming to the city. Then fights with guild master on relatively even ground.

Outcome: he is given lowest adventurer rank because he doesn't have much experience fighting humans... Guess what is the first and the only available task for F rank adventurer- killing goblins.

This one uses a lot of the common isekai elements, like being rejected at first and the MC being unexpectedly overpowered. It has the usual set of fantasy races and monsters, a basic skill system complete with game-like interface, and a virtual assistant in the form of a manager of worlds or something. The story isn't very complex and progresses quickly, on account of there being very little social interaction in favor of training and fighting. So much so that plot holes appear. For example, the MC lived with his mother... more>> but when he (and presumably his mother) were going to be killed, suddenly there was no mention of his mother anymore, and he just got the beep outta there. Positives: MC isn't a total wuss, bad guys have decent motivations, excellent translations
Negatives: Growth progression is too easy and too fast, what happened to mom? These types of stories are a dime a dozen on this site, and this is one of the better ones. Not the best, but if you're looking for a lighthearted isekai story you can do much worse than this. <<less

I cant rate this any higher as the translations are great but stuck in patreon hell. As for the novel, well its really good. MC isnt overpowered, but clever. While its a harem, they come with wide development times from rach other. This is a very long series. Itll take years to catch up to current chapter at this rate so 3 out of 5 for now ubtil the tl tls faster.
0 Likes · Like Permalink | Report
Advertisements
Leave a Review (Guidelines)
You must be logged in to rate and post a review. Register an account to get started.