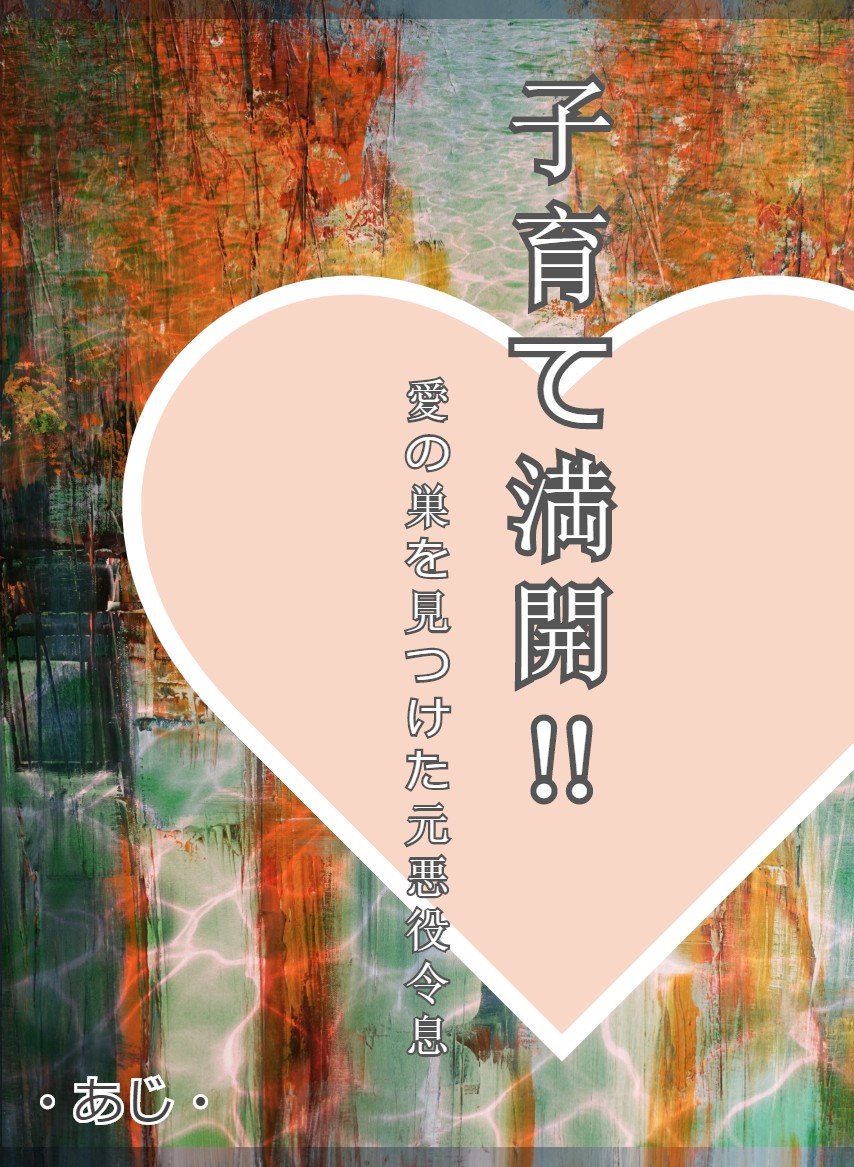 One entry per line
Aji
あし

Status in Country of Origin. One entry per line
280 Chapters

Lilius, who harboured a past of being an arrogant, high-handed aristocrat and had been exiled from the family when he’d been a student, had been working as a healer in a remote rural village.

Then one day, Lilius met a beautiful but arrogant young boy.

It seemed that Lilius and the mother the boy was searching for were as alike as two peas in a pod. Even treated coldly, the boy wasn’t willing to separate from Lilius’s side.

Although Lilius didn’t want to get involved in troublesome matters, the boy’s father was the empire’s hero and a renowned knight commander.

In addition, there were twin little brothers with rich personalities. For some reason, he ended up living together with these four people, causing Lilius to be at a complete loss. However, the real trouble began from here on.

One entry per line
子育て満開!!愛の巣を見つけた元悪役令息

Nurturing the Hero to Avoid Death (3)
It’s Easy to Take Care of a Live-in Hero! (2)
Bringing a Son to Marry a Giant (1)
His Son Has a Richest Billionaires Dad (1)
The Traveling Hero Won’t Let the Innkeeper’s Son Escape (1)

These are recommendation lists which contains Parenting in Full Bloom! The Former Villainous Noble Son Who Found His Love Nest. You should give them a visit if you're looking for similar novels to read. Alternatively, you can also create your own list.
More Lists >>>

First of all, I don't understand why someone would give this novel a 1 star because honestly? It is a 5 coming from me. Give this a chance, it really is that good. This novel isn't something that you should read while expecting fluffy scenes and happy-go-lucky characters. If you're expecting that to happen then sorry to disappoint but you're at the wrong place, honey. A good part of this novel is filled with angst, it was so painful to read. But there are a lot of heartwarming moments too, especially... more>> with the kids. This was really well-written and it clearly depicted how helpless and desperate the MC was. He had a lot of traumas and somehow we as readers feel like we can relate to it. By far, I believe this MC is one of the best I've encountered. He has a lot of traumas but persevered despite constant hurdles coming towards him. Despite the title labeling him as a former villain, it's interesting to see how he isn't exactly 'evil' in the first place. He was just misunderstood and unfortunate, thus the labeling 'villain'. It's clear that a lot happened to him in the past but there are lots of stories untold in the beginning. Only by reading further, you will know what exactly happened to him. MC is very wise, and he spills profound words like it's nothing. Honestly, it's like I'm given advice on how to live my life by reading this novel. And to think, he was an arrogant aristocrat in the beginning. It's so satisfying seeing MC's character growth and how he got through his inner devils. But of course, no matter how strong someone is they need to have someone to support them right?~ This is where the ML comes in. ML is providing what the MC has never truly experienced--the feeling of being loved and pampered. I like how the romance doesn't overshadow the slice of life genre. It's not the kind of romance that makes you sick to the stomach. The romance between them makes sense--it's not like the ML suddenly likes MC from shallow reasons. They had to break through their prejudices to understand each other, and that's exactly what they did. Ah... It was very beautiful my eyes are starting to water. /wipes tears/ I have to thank the translators for picking up this amazing novel. Seriously, thank you for allowing us to read this QAQ. We have yet to reach the ending, but I'll wait patiently because this novel is worth it. <<less
1 Likes · Like Permalink | Report

I'll give this a straight up five stars because it's certainly interesting and a thanks for the translator's hardwork. I expect full on fluff coming from this story and I can't help but be excited to the future chapters. I'm such a sucker for BL childcare stories.
10 Likes · Like Permalink | Report

At time of review, chapters translated is at 6 but I Google Translated the raw. I skipped chapters after Arc 4 as the story moves towards unfolding Lilius' past and then I eventually dropped the novel. If you're expecting this to be a light and fun read, don't. Given the synopsis, I thought the story would be about Lilius' growth and his journey towards becoming a family with the ML and his children. It's not though. So far, at 234 chapters and ongoing, the novel is about Lilius facing and overcoming... more>> his horrific past that is now catching up with him since his entanglement with ML & the children. 5 stars for the translation but 2 stars for the novel. <<less
9 Likes · Like Permalink | Report

First of all, great translation– which for some reason is a rarity for Japanese BLs as compared to Chinese ones... Might be a little early to rate the story but I don't want the translator to be discouraged by the other 1 star review. I quite like the MC and his tsundere grumpy nature! Despite his reluctance he can't seem to reject the kid's requests as he sees himself in the kid. Looking forward to knowing more about MC's backstory and all the fluffy interactions w the the kiddo!
7 Likes · Like Permalink | Report

If you're looking for something angsty, fluffy and cute (all the animals uwu I might die from the fluff) then this is it! ... more>>
Spoiler

Our MC wasn't a good character prior to this story... not really his fault because I think that's just how his family is. With nobility comes arrogance and disregard to the lives of the poor etc you get the gist. He mentioned how he was framed by his younger brother and his sister hated him because they looked alike (??? Like huh?!) But the story does makes sense and it doesn't just come out of nowhere and I can envision how the nobles act and its realistic and well thought of.

Nevertheless the MC is not a white lotus and we can see parts of his personality that moulded him as a nobility in the past so definitely you know its realistic because people don't just suddenly change! He hates children and speaks rudely with 'ore' not the soft spoken kind of MC. But definitely kind and strong-willed.

[collapse]
People who come here for fluff and dont get what you expect, I dont think you understand the meaning behind the story and the feelings of the character! I mean you could totally write someone that is heartbroken and depressed or a total sweetheart after what happened to them, ignoring the fact that they were a**holes just a few years back. It doesn't makes sense! People dont change that easily! Not sure about the ML yet but so far he is hot af so I need more >< I love face slapping moments I hope this novel will have some in the future chaps! Really a worthwhile read! <<less
5 Likes · Like Permalink | Report

I usually only review once I finished reading completely translated novels but I really liked this one and there aren’t many reviews so... So far, there is fluff almost going over the PG13 limit. Plot-wise, I’m curious about what the author is gonna make out of the story. I have a vague idea of where it is going but not really. Who the ML is obvious but I’m waiting to read his POV to understand better what is his purpose and why is he interested in the MC (translator has confirmed... more>> there are gonna be chapters with his POV). Right now it’s still in the introduction fase where the author introduces the context of the story and other world building stuff. Maybe it has a slow pace to others but to me it’s fluid enough that I’m interested and I don’t feel like the author is bombarding us readers with all the info in the first three chapters. The characters have personality and some have a background (I have some suspicions that those without are gonna be explored later on). Chapter 30: so far, so good. I will update this review when I get to chapter 50 or so. <<less
1 Likes · Like Permalink | Report
Leave a Review (Guidelines)
You must be logged in to rate and post a review. Register an account to get started.