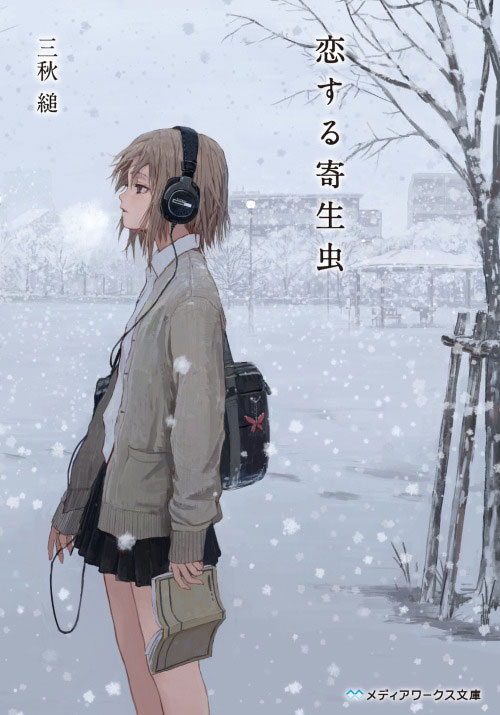 The story is about a man whose compulsive tendencies make it impossible for him to keep a job, and a young girl who skips school and loves insects. The two meet, come to support each other in reintegrating into society, and fall in love. There’s a problem, however: namely, the parasites in their heads.

These are recommendation lists which contains Parasite in Love. You should give them a visit if you're looking for similar novels to read. Alternatively, you can also create your own list.
More Lists >>>

This is the first novel I read by Miaki and it is very heart-gripping. I love these kinds of elements in a novel. Two individuals finding love in an unusual way. It let me realize some things in life, pensively, but in a meaningfully good way. Truly my words would not suffice how great this book is. Kudos to you Sugaru Miaki!
4 Likes · Like Permalink | Report

Truly not his best work, that being said, his other novels were far more philosophical and memorable as well as the extremely well thought out characters and character dynamic. The unique way he approaches his topics and views on them (the main reason I read and applaud his books) were nonexistent in the face of the pseudo-paedophilia in this read. His only 'not so good book' in my opinion
2 Likes · Like Permalink | Report

Certainly not my favorite Fafoo novel, but I appreciated it. I like the way that the different threads of the story weave into each other, I still enjoy the dynamic between the two leads, and I think the ending was beautiful. With that said, of every Fafoo novel I've read so far, I've felt a deep connection to the protagonists, and the twists always blow everything about my understanding of the story out of the water. I just didn't get either of those in Parasite in Love. The central dilemma didn't... more>> connect with me, and the twists felt very disconnected and inconsequential to the themes of the story. I wouldn't say I'm disappointed, because like I said, the ending was still strong. It just didn't make me break down in grief for a week like Three Days of Happiness, Pain Pain Go Away, and Starting Over. Definitely still worth a read. <<less
2 Likes · Like Permalink | Report

Breath-taking. I did not expect to find this type of novel on this site, but I am so glad that I did. I feel a better person for having read it. I adore parasites, so the underlying science and descriptions were utterly fascinating. The combination of my favorite subject and mental illness was both provocative and plausible. I am currently floating in a perfect literary after-glow and can't properly elucidate on the sheer genius of this short novel. I am extremely picky when it comes to pure romance, and this... more>> was tragically satisfying. Perhaps when my tears dry and my mood stabilizes I will provide a better review, but I had to share something of my feelings regarding this fantastic work of art. It is fairly slow-paced but captures your attention and pulls you along. The characters are deeply human and have an air of mystery that belies their cushioned emotional states. The strangeness of the atmosphere is made familiar by simple empathetic appeals and a semi-morbid curiosity on the part of the reader. This was just so incredibly well-done and well thought out that I am left craving more, although the story itself is satisfying. <<less
2 Likes · Like Permalink | Report

Great story like always by this author. I do think he gets kinda off track at one point in on of the chapters, but overall still the same type of story I would expect from him. Touching, philosophical and very human.
1 Likes · Like Permalink | Report

Wow this is a very beautiful story. I'm not good with words so I can't really explain how much I loved it but its just soooooooooo Gooooood! Its the kind of a story where you feel refreshed and very emotional after you finish it so if you are wondering whether to read or not Go right ahead and read it cause its Totally Worth it! I've already read all the stories written by this author and I was saving up this one for the last, now that I finished it... more>> I'm actually glad I saved this up as a last read cause personally I think this story is best and has 'pure' kind of love in it which feels very natural and magical. <<less
1 Likes · Like Permalink | Report

The author is really getting better at creating novels. This novel is certainly my favourite in this site. Great narrative. Good theme explorations. Dialogues can sometimes be a bit boring due to info-dumps but I still look at them at a neutral stance since the contexts are fine. Good characters and somewhat alright character developments. I enjoyed it a lot. Definitely recommended. 7/10
1 Likes · Like Permalink | Report

The author did a few info dumps about parasites which I particularly loved a lot but I could see people skipping that. While I couldnt relate much to the characters compared to the authors other works I can still appreciate the great writing and symbolism used througout the novel.
0 Likes · Like Permalink | Report

Its a short, refreshing, emotional and beautiful read. I was always putting the story aside to read later. And I finally finished reading it. Now, I can say that im grateful I didnt put it off until I forget about it. I really love the story that I read the last couple of paragraph several times at the end because while I knew this story is coming to an end, I wasnt prepared for it. Thank you to the author and to the translator for bringing this story to life.
0 Likes · Like Permalink | Report

A really good novel, you will get hooked, u wont regret it if you read it. For real, start reading now. if you want to understand the ending (from what I could gather), read this after finishing the novel, HUGE SPOILER. ... more>>
Spoiler

I believe that Sagani died, why? Because as said in the last chapter, she believes her fate is the same regardless of what happens, meaning that even if she was saved by the MC, she will still die. As mentioned in the novel couples infected by the worm will die by double suicide, and by the end of the novel a real cure hasn't been found, so the only fate that awaits her is to be sad and alone after separation or double suicide with MC, so I believe she choose to die by herself while she knows that she loves MC for real, and save the MC by doing so, as mentioned in the last chapter she is afraid of loosing love after finding it and that one of them lived "Miraculously".

One Over Infinity
Advertisements