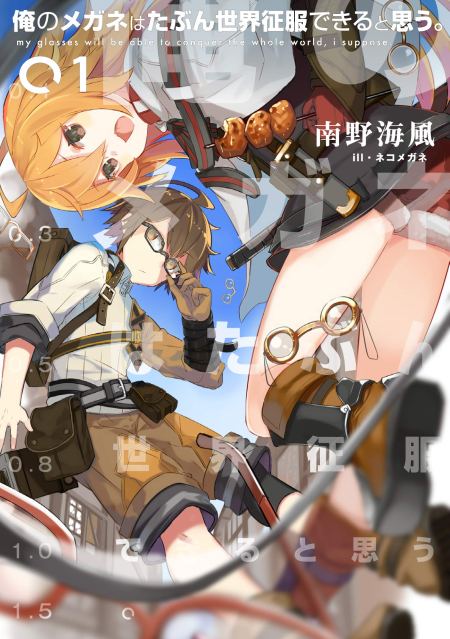 The apprentice hunter who hates being the target of attention, Eil of the village Albat.

Upon becoming 15, at the Ceremony of Determination that he needs to go through to be acknowledged as an adult, he is determined to possess the ‘Talent for Megane.’

What does that even mean?

But gradually, Eil discovers the countless possibilities hidden within his megane, one at a time.

“I think these glasses might actually enable me to conquer the whole world. Not that I’m going to do it, though.”

One entry per line
My Glasses Will Be Able to Conquer the Whole World, I Suppose.
Ore no Megane wa Tabun Sekai Seifuku Dekiru To Omou.
俺のメガネはたぶん世界征服できると思う。

I Reincarnated For Nothing (1)
Sevens (1)

These are recommendation lists which contains OreMegane. You should give them a visit if you're looking for similar novels to read. Alternatively, you can also create your own list.
More Lists >>>

This is a novel with a potentially interesting premise, as we 'stay tuned in' to see where the author is going with this idea. The GOOD: The BAD: The DIFFERENT: Anyway, as little as there is so far, it's at least different. Dunno if the author actually has a proper plan and can carry the premise convincingly, but other than a few bad habits, the author does have some skill- so I guess we'll see. 10 chapters later, and I give up. The latest chapter makes me feel like I'm listening to someone intent on telling me things without the slightest regard as to whether or not I'm interested. I don't know what the author thinks they are doing, but to me it's just more 'and another thing happened'- and even worse, the MC is even annoyed by it! Sorry, MC- face your petty demons on your own... Anyway, hope I'm wrong, but I fear this author's already out of steam... : (
21 Likes · Like Permalink | Report

I like it. MC's motivations seem to morph over time with no clear set goal, but that's how it works in real life too. Initially: He wants to live a simple life and eat meat. Later: He wants to get strong enough to deal with any possible monster threat that might affect his village as well.... more>> After that: Getting stronger solely for the sake of it? I guess he enjoys being the most competent person in a crowd, even if he doesn't show it or want praise. To be clear, there's no level system in this series. Getting stronger is all about (relatively) normal training. I'm not even sure if this is one of those worlds where exhausting your MP pool is a method of growing it. If a "Talent" has combat effectiveness, it could be about improving that as well. But given how limited some Talents are in scope ("Baking more delicious bread"), I would think there'd be at least a few adventurers/hunters/assassins with Talents that were completely useless for combat/intelligence gathering, who manage just by being very competent in their fields. But so far there haven't been. Main complaint: MC too OP, please nerf? Time for some spoiler text. Eil's Glasses: Initial ability: improves vision.
Spoiler

For apparently anyone with bad vision that uses them? Lens prescription doesn't matter when glasses are materialized from magic, despite Eil initially thinking it might. Also, he can use them both as sunglasses, glasses that make night time appear day time, and thermal vision. Also, mentioned in chapter 3, but never mentioned again, his glasses work as mana batteries for himself. Also, as of the stalled translations (ch 10), numbers appear above people's heads, soon, it's explained that these numbers represent his chance of victory against that person/animal/magic beast. Also, he can parasite vision any other pairs of glasses that he's created, he only used this ability once unconsciously, and never sought to use it again. (Edit: Turns out, he used it again in 254.)

But why "Conquer the World, Probably"? Everyone else in the series is limited to the one, or rarely, multiple Talents they have. Training a second Talent is tough, because most people don't have one, they're not revealed by the testing, making them difficult to know/train. Eil's glasses let him see other people's Talents, with some conditions (I think they need to use it in front of him.) At which point, they're logged by his ability, and he can use a diminished version of them. He can only set 3 Talents at a time, but that's still hugely useful. Also, by placing glasses on a person/magic beast, he can forcefully reveal their Talent, giving himself access to that ability. He's also limited that a lot of abilities aren't nearly as useful in their initial raw state, without training in their usage or evolution through usage.

I love the narrator's snarky comments, especially with regards to his sister. Tenshi Translations is as impeccable in their work as always, as are their translation choices. Please keep up the good work. I am looking forward to the rest of this series~~~
3 Likes · Like Permalink | Report

Off to an interesting start I'd say. MC's selling point/cheat is different. I like his personality as a character since he seems like an introvert who likes to keep to himself and the writing makes hime actually stay in character. Unlike other stories where "I dont want to stand out" is only a phrase but those MC's go with the flow, this one actually DOES something about his circumstances if he can to hide and not stand out. Sadly, the translator stopped translating and no one has picked it up yet.
0 Likes · Like Permalink | Report
Advertisements
Leave a Review (Guidelines)
You must be logged in to rate and post a review. Register an account to get started.