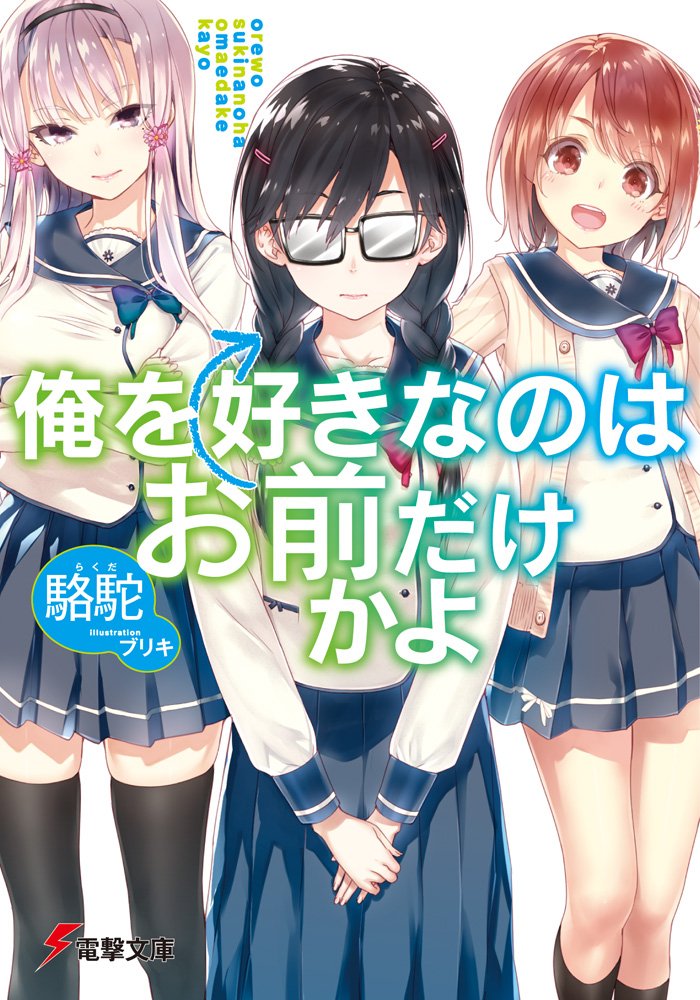 Status in Country of Origin. One entry per line
17 Volumes (Complete)

What would you do, if a girl you’re interested would confess to you? On top of it, it wouldn’t be just one girl. A cool upperclassman adored by the whole school. And your cheerful, energetic childhood friend. I bet you would be over the moon. Thing is, what if there was an unexpected problem about the contents of that confession?

One entry per line
OreSuki
The only one who loves me is you?!
俺を好きなのはお前だけかよ

These are recommendation lists which contains Ore wo Suki Nano wa Omae Dake ka yo. You should give them a visit if you're looking for similar novels to read. Alternatively, you can also create your own list.
More Lists >>>

It's a bit of a funny take on a love comedy harem in the way that the first arc is where we are introduced into the MC and his life. We then find out that he is pretty much a fraud on his goody-two-shoes act, though he is veeery kind and caring at his core. For some twisted reason however he wants a high-school harem and have been working on his childhood-friend and his senpai. The rest is a bit of a summary spoiler on the story.
Spoiler

It fails however in the way that when he thinks they will confess to him, they both confess to be in love with his best friend instead. On the other hand a another girl unknown to the MC pops up and turns out to be stalking him and confesses to be in love with him instead. Then the best friends confesses to love the stalker girl instead and there we have a love pentagon.

[collapse]
The trope is pretty funny and most at least appears to be well written and the story is delivered in a fairly sweet and funny way, though pretty much EVERYONE is two-faced and to be honest almost everyone around the MC are pretty tr*shy people to be honest. Some spoilers on that.
Spoiler

The childhood-friend and senpai doesn't believe a word the MC say's and pretty much rages on him for failing to get either of them together with his best friend. His best friend on the other hand was using the two girls to really tr*sh the MC's reputation cause a girl in middle school he liked didn't like him but liked the MC instead and he hates to lose so he did a bunch of stuff to smear the MC's reputation, he even goes so far as trying to r*pe the stalker girl when she say's she'll never love him.

[collapse]
Still even when the MC's friends all behave and treat him badly he mostly just accepts it all and forgives them and wants to become friends with them again. Something that just rubbed me the wrong way I gotta add is that.
Spoiler

The people at the school are all pretty tr*sh as well. I mean everything in the first arc was a set up by the best friend and it ends with the MC being bullied, beaten and just plainly abused for quite some time, until the stalker girls makes the best friend confess that everything was his plan and work. This is the part were he then tries to r*pe stalker girl but she springs the MC to come forward and even then the MC is all forgiving and such which in turn makes the best friend fell bad about everything so he confesses to the school and then everyone is just "oh haha what a cruel joke let's stop bullying him". But nothing happens to the best friend, then later on a 2nd stalker girl appears and tries to smear MC's reputation again so she can get him all to herself and the MC would stop hanging out with any other girls and everyone at school just believes that 2nd rumour from out of nowhere and starts treating MC bad again.

I mean come dude the MC has been portrayed as the sweetest guy ever and is loved by most ppl since he likes to help out couples and everyone who asks for help but from just one unconfirmed rumor it's all destroyed and everyone turns on him. Then when it proves false everyone just goes back as if nothing happened and when 2nd rumor appears again they just jump on the MC again. Like wtf at least doubt random stuff a little bit, I am a bit unsure on if this should be funny or something but somehow it just feels like the good guy always get's the short end of the stick.

[collapse]
Overall I would say the story is good, characters are fairly likeable and especially the MC made me care and feel bad for him. I'd give this a solid 4/5 from what I've read so far.
23 Likes · Like Permalink | Report

Everything so far is good except for...... All side characters in the story.
Spoiler

I wish there should at least be some kind of "Punishment" or "Karma" for them.

[collapse]
The writing and all (comedy, characters, etc.) are good but the story which it progresses... I'm unsatisfied.
Spoiler

Note: This is just my personal opinion but... I hate a "Betrayal" that didn't received their own "proper medicine".

From just the manga it is a great theme.
Spoiler

almost every character likes the wrong person and everybody has their own designs on how to get what they want. The MC is every single character is manipulative but have a certain line that even if they cross will run back.

I'll just say that if the MC doesn't end with Pansy then I'm going to get angry, (as most sensible people I tend to prefer harem endings, but Neither of the other girls are worth anything compared with Pansy's devotion, maybe Tsubaki, but she isn't in love its more lige gratitude on her part, so Pansy or nothing!!)