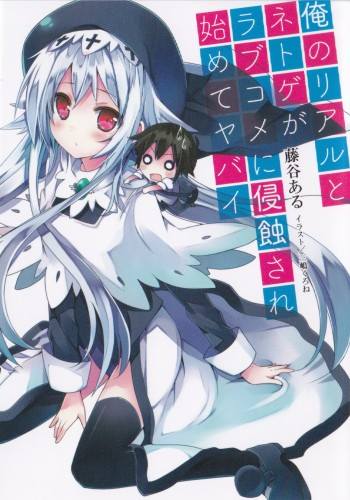 Status in Country of Origin. One entry per line
8 Volumes (Completed)

Sagimiya Keita is a heavy gamer of MMORPG without experience with girls. In his favorite game, he controls a female character, like most of the members of his guild. But when it comes to offline meetings, Keita plays the role of the “The Knight-sama”, the only male character of the guild. He became famous in real life as in virtual life! The romantic comedy between the real world and the virtual one begins!

One entry per line
俺のリアルとネトゲがラブコメに侵蝕され始めてヤバイ

These are recommendation lists which contains Ore no Real to Netgame ga Love Comedy ni Shinshokusare Hajimete Yabai. You should give them a visit if you're looking for similar novels to read. Alternatively, you can also create your own list.
N/A

*sigh* Unfortunately this was not what I was expecting it to be. I suppose it's my fault for coming in with certain expectations but I was mislead by the premise. This LN follows the daily hjinks of a 6 person guild that apparently has 5 girls and 1 boy. However this isn't the truth, the MC is actually a guy playing as a girl and hiding it from the rest of the group. Things get complicated for him when the only male avatar character, the "Knight" confesses to him and... more>> then calls for a full guild offline meeting. Here what I expected: Turns out that the Knight is also a girl in real life, playing a guy online. Said Knight knew that the MC was a boy, but in the offline meeting they'd switch places with the MC pretending to be the Knight offline, and the Knight pretending to be Riel (MC's character) online. With the above premise I could foresee a lot of wacky situations developing with potential misunderstandings and misdirection going on while the MC attempts to hide the deception from the others. I was hoping for some interesting character dynamics with the pair playing off of each other. Instead something much more boring occurs.
Spoiler

Spoiler territory here so be warned, although you aren't missing much. In reality the "Knight" is one of the girls' alts. There is no real Knight. The Knight's owner gives the account to the MC and basically blackmails him into playing that account. Furthermore the MC's character Riel literally gets stolen from him. Riel is basically dropped as a factor/character. There is some mystery angle where the MC tries to figure out which of the girls is the Knight, but later it gets revealed that they were all just trolling him together.

[collapse]
tl;dr It quickly devolves into bog standard boring harem cliches. Beta, spineless, good guy, blank slate mc? CHECK! A bunch of girls that just so happened fall for him and form a harem? CHECK! The plot going nowhere and just being milked for fanservice? CHECK! It's not 100% terrible I guess, but it's literally all stuff that has been done before. Screen time is split relatively equally between all the girls. This has the side effect of not giving any of them a chance to really develop outside of their arch-typical roles. With the identity of the "real Knight" unceremoniously revealed at the end of volume 1, I honestly can't see this novel going anywhere interesting. It'll probably just be more slice of life from then on with the MC being unable to pick anyone (or going harem) despite all of them making their advances super obvious etc etc. This may be fine for some people, but I'm personally really tired of the same old harem tropes. I gave it a 3 since it was OK and I just personally was really peeved by it. I'm grieving for the lost potential. I wouldn't recommend it in particular since there are better generic random harem LNs out there. People who still enjoy that kind of story and just want more will probably still like it though. <<less
9 Likes · Like Permalink | Report

I would give this 5 stars, but the grammar is a bit off so 4 stars. Anyways, our MC is a high-school otaku playing a video game known as ZD. In game, he is part of a 6 player female-only guild, which somehow has one male character. However, that's not MC-kun; MC-kun is a nekama playing a female character. However, the male character, Hugues, pushes MC-kun into an offline meeting by threatening to propose (in-game). (Un) Surprisingly, it turns out Hugues is an alt, and MC-kun must pretend to be him.
0 Likes · Like Permalink | Report

After reading the first two chapters I thought that this would just be some boring rom-com that shows up all the time. After the 6th chapter I found myself wanting more. If you like harem/romance type novels then definitely give this a try. I'm giving this a 4 because I can see the potential in this novel.
0 Likes · Like Permalink | Report
Leave a Review (Guidelines)
You must be logged in to rate and post a review. Register an account to get started.