Novel Updates
RegisterLogin
Theme
Search
Your changes has been saved.
Advertisements
Only with Your Heart

Home >
Novel >
Only with Your Heart 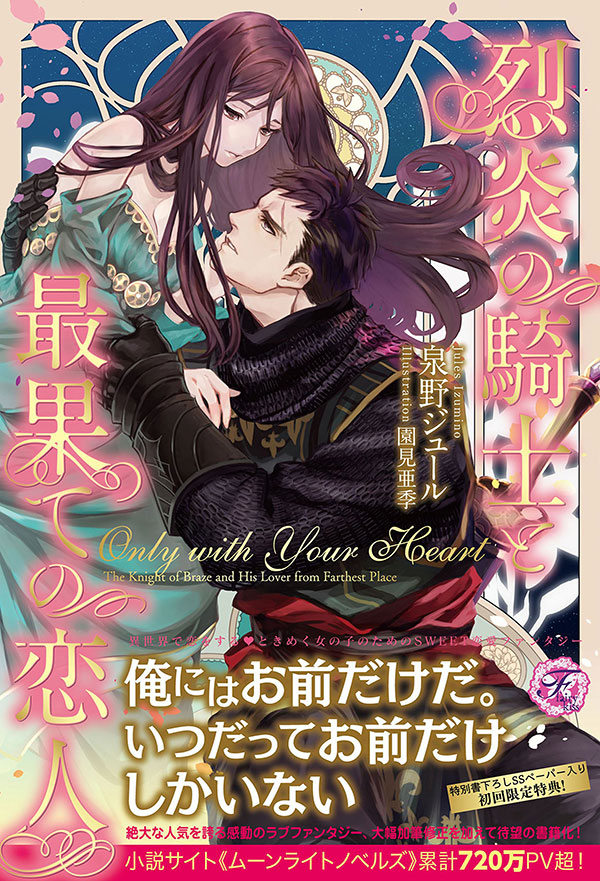 At a glance, Chizuru Ayase looks like your average fresh-faced employee. However, she held a secret that she couldn’t tell anyone… During her last summer vacation in high school, she had been summoned to another world and became its savior. And in this past, she had fallen in love with its Hero, ‘The Knight of Blaze.’ This is a fantasy romance about unrequited love in a medieval setting.

One entry per line
Only with Your Heart: Retsuen no Kishi to Saihate no Koibito
烈炎の騎士と最果ての恋人

These are recommendation lists which contains Only with Your Heart. You should give them a visit if you're looking for similar novels to read. Alternatively, you can also create your own list.
More Lists >>>

...I'm kind of surprised this was here on NU. I somehow found this story on syosetu just last night as I was scrolling through, and read it all throughout. This story made me cry a few times, so be prepared a bit for the angst (or maybe it's just me that cries too easily lol). But the story is nice. Basically, she goes back to the other world after a year or so, and hopes that she'll be able to get back together with her man, but that doesn't happen immediately... more>> because
Spoiler

Voila! Apparently 14 years have passed in this other world, and our ML has gone through a ton of shit, and is scared of losing the MC again, so he treats her like a s*x s*ave/pushes her away a whole lot in the beginning (he calls her "a guest" lol). One good thing about this story though is that a "love rival" shows up for like a few chapters, and I thought this was going to go down the "Oh, we misunderstood each other, we should have talked it out instead" route, but doesn't do that instead. Though one thing that did annoy me is that the ML suddenly started believing that the MC wasn't going to leave him OUT OF NOWHERE when he's been so hesitant and scared like half the damn story. Also, I don't think unrequited love should be part of the spoilers when he still loves her...?

[collapse]
The smut (and probably even the story) reminds me of the Western Harlequin romance novels. <<less
22 Likes · Like Permalink | Report

Wow! Read it everyone, you won't regret it. A bit sad but I think her story will start soon, wish she couldcgo back soon to be with Lukrov. I hope Lukrov isn't in any relationship with any woman, I really hope he could wait for her.
12 Likes · Like Permalink | Report

The story so far isn’t horrendous but it isn’t spectacular either. It’s very forgettable and plain. The story mostly focuses on ML’s and MC’s relationship. By mostly, their relationship is the plot. Also, since the plot revolves around their relationship, it would have been better to have the prologue focus on their interactions and not on them f*cking from 3rd POV. You don’t really get the details (or shown why besides sex) of why they love each other. It’s just “oh they were together for an adventure and they fell in... more>> love”, “when separated they both suffered a lot”. It’s like this because the readers are experiencing the relationship AFTER it ended. The characters can say whatever they want about how beautiful the relationship is and the readers still won’t be invested. 2 stars for the plot and 1 extra for the good translation. This story is decent for smut standards, but those standards aren’t very high. tldr: Mediocre story, and it’s entire plot is based on the relationship between ML and MC. It’s romance game wasn’t that good either. <<less
2 Likes · Like Permalink | Report

I’m anticipating this. Just with the smut genre, coupled with romance and r-18 without harem... (kyaaa!) I think I’ll be hooked. ❤️❤️❤️
2 Likes · Like Permalink | Report

I love this story because it focused in the plot not some other story that neglect the description and alot of twist that not necessary for the story. The story focused on the MCs. How they met and how they separate. ... more>>
Spoiler

after killing the beast (i forgot what is it) the FL left the hero cuz she has 1 family in the modern worrld that she can't leave. But that 1 family die sheee did everything inorder to get back in that world. To fulfill her promise (not to sure cuz it was long time ago I read it in mtl and just want to review cuz theres some small votes aching my heart and want some other readers to give it a chance) when she got back of course she knows that it will be hard. Hard to trust her again, and the life but she is willing so she stayed by his side after the hero found her and more likely make her suffer. ETC.

[collapse]
Give it a chance guys. This story is not bad.
Spoiler

the ML hmmm... I understand why his doing that to the FL. She leave him behind. Make him suffer etc but in the end he will realize that what he's doing is not worth it and loved her more. In the end they lived happily hehe

Wow!!! This novel is so amazing!!😲😲 I was really hooked by this plot. I really like all the characters in the story and I TOTALLY IN LOVE WITH THE LOVESTORY!!! KYAAA~~😍😍😍 why those this novel is not well known? It has amazing plot!!! And for the translator/s you really are amazing for taking this wonderful novel to be tranlate into english. Please continue in translating this novel. I will always support your work!!!
1 Likes · Like Permalink | Report

Meant to hit 5 star 😭 This is brilliant, sad and beautiful and a little slow paced but so beautiful. Thank you everyone for translating this!
0 Likes · Like Permalink | Report
Leave a Review (Guidelines)
You must be logged in to rate and post a review. Register an account to get started.

Fun to just Power Up