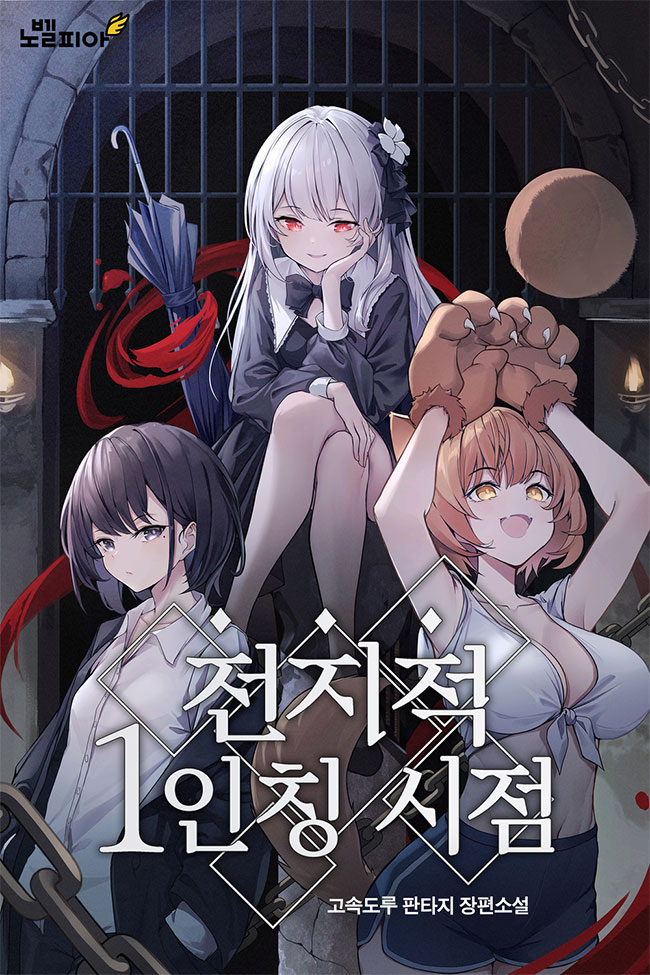 One entry per line
고속도루

Status in Country of Origin. One entry per line
306 chapters (ongoing)

One entry per line
Novelpia

I, a mere con artist, was unjustly imprisoned in Tantalus, the Abyssal Prison meant for the most nefarious of criminals, where I met a regressor.

But when I used my ability to read her mind, I found out that I was fated to die in a year…

and that the world would end 10 years later.

These are recommendation lists which contains Omniscient First-Person’s Viewpoint. You should give them a visit if you're looking for similar novels to read. Alternatively, you can also create your own list.
More Lists >>>

I was the one who suggested this novel to get picked as it deserves to be read by a much larger audience. All I would say it's been truly enriching experience for me personally. I would recommend you not to let the cover mislead you and not let your preconceived notions of "Harem" dissuade you. Accolades: Winner of 2021 Novelpia Universe Strongest Web Novel Contest Ranking: 3rd in Life Picks ... more>> Genre: Fantasy, Misunderstanding, Harem Premise: I was unfairly imprisoned, but there was a regressor. After reading her thoughts, she says that I will die in a year. In 10 years, the world will perish. ... GG life spoilers. That's how the novel begins. The protagonist of the novel has mind reading skills and knows what the other person is thinking. MC's name isn't revealed till 100 chaps iirc but his traits are crystal clear so you can picture him clearly. The unique aspect of this novel is you see the dystopian world depicted through MC's eyes. Thus the title Omniscient First-Person's Viewpoint. He uses this ability to get a full scholarship with excellent grades from elementary to secondary school, but he was caught on an illegal gambling site. The protagonist was then dragged and tossed into the abyss of Tantalus as a sanctioned first class convict, where only heinous criminals are imprisoned without a trial. There he meets the Dog King, Progenitor of Vampires, and the Regressor. In reality, the main character was only a scammer who knew how to read minds. After meeting the Dog King, Vampire and the Regressor he pretended to be sent to Tantalus as a military instructor. The work is critically acclaimed for its lifelike side characters, author's narrative and the dystopian worldview. Instead of simply dumping info about the world, the author drops clues here and there throughout the story which the readers need to piece together, which is pretty intriguing in my opinion. You are expected to read the journey of an intelligent protagonist and charming female leads. We didn't even know the name of the MC until 100+ chaps but his traits are so clear you can picture him clearly. Don't get dissuaded by the cover and have patience with this novel just like LOTM it takes a while to get going since author tries to set up the dystopian worldview. The author's immersive writing style and insights in so many different aspects is worth reading and is truly enriching experience as you gain some wisdom out of it. Even the 2nd cover of the novel has a deep insight of what's to come in the upcoming arc. Characters:
Spoiler

The Protagonist: His name is revealed at the end of 100 chapters long prologue iirc. He describes himself as a scammer or an actor acting on the grand stage of this dystopian world. All his actions initially were mostly geared towards his own survival and avert the future. At the end of prologue. He begins to care for the bonds he forged and believes the foundation of those relationship was built on lies. So since he deceived them, he judges that he isn't their comrade after breaking out of Tantalus he disappears from their lives.

The Regressor: At the time of the start novel she is on her 14th Regression and MC who read her thoughts more less decides to live in moderation and avoids getting killed.

The Dog King: Ruler of the dogs and just like dog she possess innate loyalty and affinity to humans. She never accepts any requests that indirectly or directly harms humans

The Progenitor of The Vampires: Silver haired girl on the color. She is a primordial being who lived for 1200 years. Who just is wasting away without a will to live as she can't even kill herself. Her heart has stopped beating, and she became apathetic. She is literally the female version Yu-Jitae from Kindapped Dragons. It's only with the help of the MC she is able to piece her heart together. MC is the only one who is able to make her heart beat, albeit temporarily.

The structure of the magic system is well thought-out.

There will be political struggle involving the MC in the future chapters, and which helps drive the plot further.

Also, the way the author sheds light into MC's background is intriguing.

[collapse]
Final Verdict: It's a must read. At the time I'm writing this review I didn't catch a wink. So I'm rather stoned to the core. But I do recommend to read this novel till 100 chapters at least before deciding drop or not. Because the first 100 chapters are basically prologue set up to add depth to the plot, characters, worldview is a foreboding to upcoming arcs. <<less
46 Likes · Like Permalink | Report

First of all, I see a lot of readers confused about the title of the novel and even calling it a ripoff when they didn't even read a single chapter- this novel isn't related in any form to ORV.
The MC of the novel has mind reading skills and knows what the other person is thinking. Combine it with the rest of the title, the novel's name fits. Our MC (we don't know his name yet) was found a criminal without any witnesses or evidence, in a court with no... more>> jury and got thrown to the abyss. He survived the fall and he meets there 3 women- The dog king- Really cute so far, she acts like a dog in regards to both being loyal to humans and listening to commands, The Progenitor of Vampires- a typical cold vampire and a hot headed regressor. He uses his brain and pretends to be a military instructor and befirend them.
Not much seen so far but by how the novel is very successful in Korea, I'm really excited for its potential, the characters are fleshed out, there is a lot of mystery to be unfold, and I like a MC who uses his brain rather than straight out force <<less

Omniscient First Person View is a novel that is filled with wisdom. Reviwers claim that author might actually be a Regressor because this many insights in so many different fields while he is just undergrad student is remarkable Harem tag is there but there romance is subtle and sub genre at best.. As it leans more towards friendship and how they could avert the tragic future. Main Protagonist came in 4th MC pole of the year behind likes of Frey Raon Starlight and Ferzen Von Schweig and his ability to read mind... more>> is true charm of the novel. <<less
15 Likes · Like Permalink | Report
Advertisements
Leave a Review (Guidelines)
You must be logged in to rate and post a review. Register an account to get started.