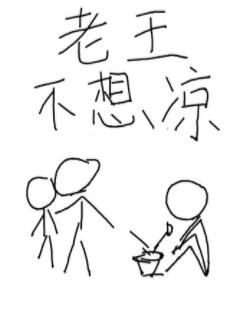 Only after Wang Zhao Mou’s death did he find out that he was just a supporting male character in a Mary Su book.

Wang’s group, which he had worked hard for more than twenty years, went bankrupt overnight. Only because of the one sentence that the male protagonist said, “It’s getting cold. It’s time to let the Wang Group go bankrupt”.

When Wang Zhao Mou woke up again, he found that he had returned to twenty years ago. He was half-drunk and was in a depressing mood. When he came out of the bar, he saw a young man holding a knife standing on the road.

While he was drunk, a strong desire to survive suddenly broke out. Wang Zhao Mou didn’t care about others and directly went to hug the teenager’s long legs, and cried out, “Boss! No…Acquisition…”

After sobering up, Wang Zhao Mou found out that the handsome teenager whose thighs he wrongly held was wearing an apron and holding a big knife to diligently open the durian.

The young man was clearly homeless and had yet to recognize his ancestors and inherit the family business!

At this moment, the young President Leng was being carried by his father behind his back, wiping tears pitifully and reaching out to him for help.

One entry per line
老王不想凉［重生］

These are recommendation lists which contains Old Wang Doesn’t Want to be Tragic. You should give them a visit if you're looking for similar novels to read. Alternatively, you can also create your own list.
More Lists >>>

I really liked this novel ! But I would recommend reading the first 20 ch and then start reading from ch 70. The mid chapters are tidbits about their daily life, those are cute too, but the real plot starts from ch 70. This is a slow burn romance novel. I didn't know the MC liked the ML till he kissed him in ch 90. MC actually acts his age, a mature and elegant man. I liked his complex character, secretly caring about his family and he's surprisingly scheming, he's not the... more>> type to easily forgive those who aggrieve him. Even the ori!ML (the baby - reborn) was not entirely forgiven by him. Even though he takes care of him, he's slightly hostile towards him till the end. I like that the ori!ML wasn't whitewashed either. (Don't pity him, he's quite a scum in the extras, an incredibly foolish and selfish guy)
Spoiler

according to the deal with MC, he lives the family and sets up his own business and unsurprisingly goes bankrupt. Later he starts working as a waiter and meets his wife from the previous life (he cheated on her with his crush) and asks the ML to arrange a marriage between them and gets rejected by both MC and ml. And so he starts repenting.

[collapse]
The families are quite realistic too. They fight with each other for the property but not to the point they are indifferent to each other. They care for each other in subtle ways and always stand up for each other. Even the ML cousin who was shown to be scheming, gives up his succession rights after losing to ML in a fair fight and learning of his grandfather's worsening condition. <<less
8 Likes · Like Permalink | Report

finally a family in a Chinese novel that doesn't demonize step-relatives and adoption. If I read the raws correctly then the wang family consists of an adopted older sister (though she doesn't know this nor does the Mc) the child of the first wife MC and a younger step-brother, and they all act like a real family. The wang dad is old fashioned and stubborn but all he does is out of concern for his kids, the step-mother is nice and loves both her child and the children from the... more>> previous wife, though she often gets disappointed by her son, the eldest sister has a misunderstanding about the MC because he ended up taking over the company but when he encourages her job choices and opinion on getting married they repair their relationship, and the youngest is an adorable idiot once he's taught a lesson by his older brother and ends up finding a career that he loves. Its quite heart warming overall. In terms of the original Mary sue plot, the oMC is rebirthed as a 1 year old and has absolutely no power over the course of the story except to see things wrap up nicely at the end of the plot and to see him suffer through kindergarten level training courses with no spoiling or slacking allowed, its a subtle but effective revenge. Apparently they are in a world where gay marriage is legal and commonly accepted in the 90's to 2000's judging by the technology level, so not the real world. <<less
4 Likes · Like Permalink | Report

I love this! At first, reading the description I was unsure, but as I kept reading it showed its beautiful storyline. I really liked the complexity of the MC's family relationships and how the family gets along despite their very different personalities. The funniest part was when the stepmother found out that her husband, who always scolds their son for being a video game addict, used to be highly competitive at arcade games. She just gave him this look of 'ah. It all makes sense now.' I really liked how the MC and... more>> ML navigated their relationship. It was very mature. There were no long silly misunderstandings or 'I must be cruel to him to ensure his future, none of that! In the end I had a lot of respect for the ML's opponent. Just gotta say, I love the wolfdog ML. <<less
4 Likes · Like Permalink | Report

Surprisingly good and funny. The characters are developed and I especially liked how shamelessly clingy the ML is LOL Although I would have preferred that the author gave Dabao's redemption arc a proper closure.
1 Likes · Like Permalink | Report

My only critique is that you don't get enough of the MC's pov especially when interacting with the ML. The ML is very affectionate and you read a lot about how much he loves the MC, but not the other way around. The first half is mainly about the MC and the second is focused on the ML, which is when they really get together. I feel bad for the original MC. He's an idiot but not a bad person just too naive/spoiled to be handling that much money and power.
0 Likes · Like Permalink | Report
Leave a Review (Guidelines)
You must be logged in to rate and post a review. Register an account to get started.