Novel Updates
RegisterLogin
Theme
Search
Your changes has been saved.
Advertisements
Not Knowing The Betrayal Of That Day

Home >
Novel >
Not Knowing The Betrayal Of That Day 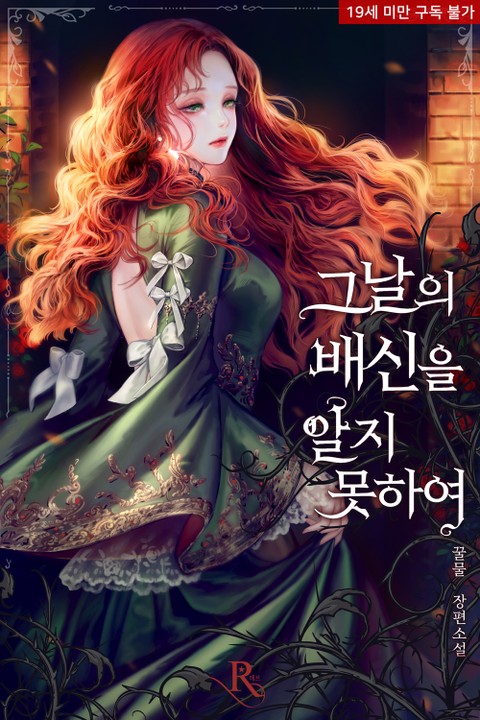 One entry per line
O.ne

One entry per line
Reve

After a hasty choice, I sold the most precious thing with my own hands.
In exchange for this betrayal, the only price given was the position of a noble’s second wife and such cruel abuse.

Tessa did not die and instead lived.
And seven years had passed.

Hert, who she thought had died, returned.

He became a decent man.

“Do you long for your husband?”

Hert took turns looking at Tessa and the portrait of the old lord he had just seen.

“What if I killed that bastard?”

Tessa sucked in her breath at the terrifyingly cold voice.

These are recommendation lists which contains Not Knowing The Betrayal Of That Day. You should give them a visit if you're looking for similar novels to read. Alternatively, you can also create your own list.
More Lists >>>

First, thank you translators for your hard work. The translation is really well done and easy to follow. With that said, the story is bad. Just bad. I don't like leaving negative reviews, especially when there are only 8 chapters, but the FL was just so dumb that I wanted to punch her myself. ... more>>
Spoiler

Basically, what happened was that the FL "accidently" sold her best friend into s*avery when she thought she was signing him up to be a knight. Like I understand that she wasn't educated and didn't know how to read or write, but seriously? She snuck into his room in the middle of the night to get his fingerprint... who on earth wouldn't think that is sketchy as hell? It was all because she wanted to surprise him. And in a way it was a surprise. Surprise all your freedom is taken away!

So its no wonder the ML is angry as hell when, after 7 years, he meets her again. He thinks she sold him to become a rich pampered housewife. Then, when he demands that she give him a reason for why she did it, she is silent. I get the first time why she stayed silent. He was blinded by rage and probably wouldn't have listened to anything she said, but the second time? She could at least say something... but no. Not even a sorry. Instead she is quite and thinks everything will be alright if she just gives him s*x.

[collapse]
Anyways, the ML is the most interesting character so far. I'd like to know more about how he survived for 7 years but I don't think I'll be continuing with how s*upid the FL is. <<less
14 Likes · Like Permalink | Report

Honestly, this novel made me a bit sick to read. The relationship is extremely toxic and abusive. The ML is nearly constantly raping the FL throughout the entire series. Extremely graphic detail of raping her all night long until she physically breaks is a favorite of the author. If you're expecting character development you won't find any in this series.
14 Likes · Like Permalink | Report

Disclaimer: At the time of this review, I've been reading until chapter 51, and the novel hasn't been fully translated. There's some spoilers bellow, so read at your own discretion. First of all, I wanted to point out some important plot points that I feel everyone who wants to read this novel needs to know, just to make expectations clear: there's a lot of abuse and angst. Like, explicit, detailed descriptions of physical and emotional abuse. Both the male lead (Hert) and the female lead (Tessa) are extremely broken, and... more>> have gone through 7 years of torture and abuse from their respective captors. The story is rather dark, so if you expect fluffy and sweet romance, look elsewhere, because this ain't it. To read a summary of the main of conflict in this novel, see the following spoilers:
Spoiler

When they were children, Tessa and Hert used to be best friends, and they both lived in the same orphanage. One day, some sketchy guys arrive at the orphanage and trick Tessa into signing a s*avery contract for Hert, knowing she was an orphan who couldn't read or write (yes, this all happened because Tessa was illiterate). The orphanage director was complicit in this as well, saying the contract is for Hert to be made into a servant to work at a noble's house. Anyways, Hert is unknowingly sold into s*avery, and to top it off, Tessa's farewell letter to him was forged by the orphanage director, saying horrible things about how Tessa just used him to get a comfortable life as some noble's consort, convincing Hert that he was just a tool and Tessa never cared about him, enraging him to no end. Tessa, unknowingly, also signed a contract to become a noble's consort, and was hoping that at least Hert would be together with her at her new home. Well, turns out her new "husband" is abusive as hell, and she was just a replacement for another woman he couldn't add to his harem. She spends the next 7 years being tortured by both him and his son, and pretty much treated like garbage by the rest of the harem. As for Hert, he was turned into a gladiator, and made into pretty much a killing machine. He eventually works his way up to be a knight captain, but he's traumatized by the whole thing. They meet again when Hert tracks Tessa down and kills everyone in the noble's castle, save for Tessa and her husband's son, with the full intent of taking revenge.

[collapse]
As others have already pointed out, the angst does drag on for a bit in the beginning, and the female lead is a bit irritating in that she refuses to explain what really happened, but when taken in mind the absolute horror they both go through, it becomes understandable later on that it's a difficult topic to talk about. By the time of the novel's events, the female lead is traumatized beyond recognition, her body is deteriorated and frail from years of torture, and it has affected her to such degree she's unable to open up to anyone. The male lead is full of anger and on the verge of insanity, and pretty much has a hateboner for the female lead. About the s*x scenes: as I said above, this novel is pure drama and angst, so in the beginning, the s*x scenes are a bit hard to read through. This is because the romance doesn't kick in until much later, and the male lead spends a good chunk of the story hating the female lead, being cruel and mean to her. So you can imagine any s*x scenes between them in the beginning are far from lovey dovey love making, rather is just hatef*cking. I don't know if it's r*pe because
Spoiler

the female lead willingly offers herself to him

[collapse]
(she's pretty broken though, keep that in mind), but the male lead is also very, very mean to her, even when they're having s*x. It takes a long time for him to start warming up to her, and I'm 51 chapters in! Anyways, I read this mainly because it was tagged under male yandere. Yes, the male lead Hert is a yandere, but I'd say he's written as a more layered character than your usual yandere. He's been obsessed with the female lead since they were children, but the whole betrayal and years of abuse made him both hate her and love her at the same time, and by the time they meet again, he has a lot of conflicted feelings about her. His personality is rash and aggressive, he curses a lot, and is fueled by nothing but anger and hatred. His character arc is to discover what happened during those 7 years, and the more he knows, he more he spirals into insanity. Conclusion: It's a dark story where the drama and angst are first, romance second. There's chapters and chapters of trauma, angst, hate, anger, and everything in between. The female and male lead take a long time to come to an understanding, and the centerpiece of this story is the male lead uncovering what really happened 7 years ago, while slowly losing his mind. The female lead also heals from her trauma as well. If this kind of story is not your cup of tea, then just skip it. <<less
9 Likes · Like Permalink | Report

How come filth like this gets a manhwa adaptation when many good stories don't? Life isn't fair. This story is another installment in the: (dumb useless submissive doormat MC) X (abusive rapist as*hole ML) series and better yet, there is no redemption at all. The dude never improves and become nicer and the dumb naive MC never gets a brain cell. That's it, end of story and they lived happily ever after
2 Likes · Like Permalink | Report

(I did not mean to put it at 1 star, but idk how to fix it, I was originally trying to put 2 1/2 At Chapter 25, this is mostly a warning more than a rating. I know lots of people usually only like ratings when the person actually read the whole thing, but I had to let something out. Guilty as I am, I came for the sm*t. Unfortunately, my stomach haven't gotten any type of romance butterflies throughout these 25 chapters. We have a depressed.. Seriously depressed fl,... more>> who feels she deserves to be used as a prostitute by the ml, who feels that she also deserves to be treated that way. I'm really not sure if this is r*pe or not. But it feels almost just like it. The fl, is grossed out by giving *ral. He makes her do it. The FL is in pain first two times of it, he makes her do it. Honestly, I'm not sure why he's keeping her alive, when he treats her like a s*x doll with no other meaning, literally thinks that way too, it's kind of hard for me to not wonder why he hasn't gotten a replacement. I mean, don't we all know? The emotions seem totally real for what both have gone through, but because they're the ML and FL and its a story, their emotions don't really flow with their actions. Anyways, this is a stomach churner for me. Rough love making is not here, it's just non acting bdsm at this point. <<less
1 Likes · Like Permalink | Report
Advertisements
Leave a Review (Guidelines)
You must be logged in to rate and post a review. Register an account to get started.