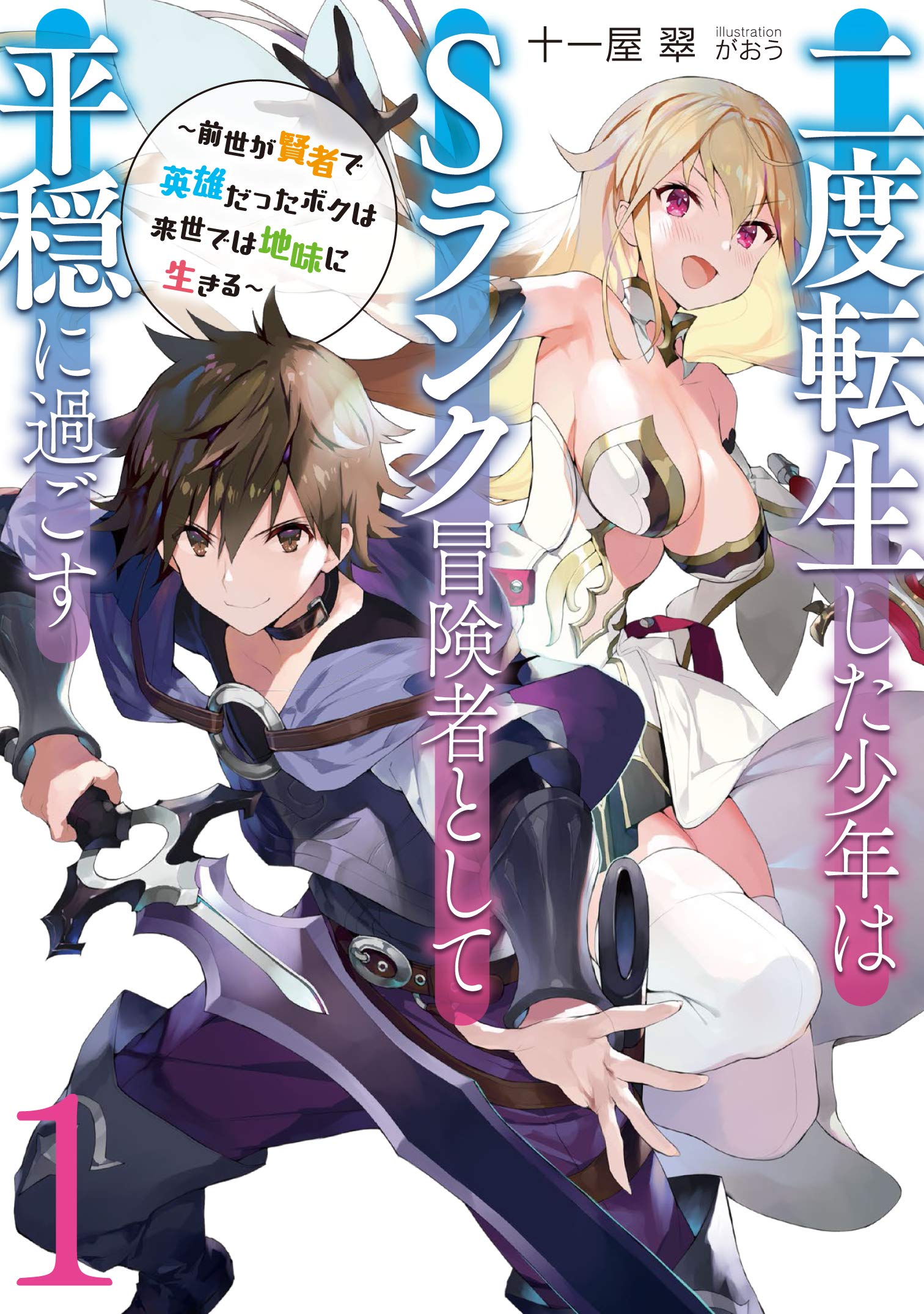 One entry per line
Juuichiya Midori

“I have reincarnated again”

A baby, Rex was a reincarnation with two previous lives, a hero and a sage.

Rex, who had learned the dangers of being conspicuous from the memory of the previous lives, vows to live plainly.

“And become an adventurer who is a symbol of freedom, a longing profession from the previous life!”

Rex, who became an adventurer after longing to fulfill his wishes, enjoys the daily life of earning money with an unobtrusive request.

“I’m sorry, while collecting herbs, I was attacked by a dragon and I hunted it.”

To the fact that his plainness is messy.

“Even so, the adventurer rank is easy to rise.”

Boys who are not aware of it still outweigh the surrounding human beings.

One entry per line
Boy Who Has Been Reincarnated Twice Spends Peacefully as an S-Rank Adventurer, ~ I who was a Sage and a Hero of Previous World, Will Live in Peacefulness in the Next World~
二度転生した少年はＳランク冒険者として平穏に過ごす ～前世が賢者で英雄だったボクは来世では地味に生きる～

The series is pretty cookie cutter. It ticks every stereotype imaginable but it's not unenjoyable. It is an OK casual read. Unfortunately though, it is unreadable without ad blocker. Thanks translate san : (
7 Likes · Like Permalink | Report

Had a look at the raws and well it's an okey read with an easy plot, pretty much MC is super OP and wants to live the chill life and therefore becomes an adventurer so he can do whatever he wants without having ppl telling him what to do. Missunderstands pretty much everything and get's told what to do all the time but since he's a free going adventurer it's all fine in his book. So yeah super OP, missunderstanding, brick dense, beta male that is happy-go-lucky at the same time. Also... more>> Harem so I added that tag. Harem spoiler
Spoiler

Far as I read there are at least two confirmed harem members (though not sure if the MC knows it yet) as far as I've read. First is called Mina and is introduced really early on, however in the novel no real description of how she looks is actually given when she's introduced except that she's a mage while in the manga she is shown as a dark haired big oppai girl. The 2nd girl introduced but kind of the first harem members since her mom basically pushes her onto the MC is in the novel (though again unsure if the MC even understands since he's so dense) only given the description she's a blonde haired girl named Lilliera that the MC calls beautiful upon their first meeting, pretty sure that she is the blonde big oppai girl shown on the manga cover.

I've only read a couple chapters of the manga, and that was enough for me to write a review. I understand that web novels and manga can differ in quality, but I think the fundamental flaw will be the same. First off, the initial concept is a good one. The MC is on his 2nd reincarnation. He was a sage in his first life and a hero in his second life. In his third life, he wants to live as a normal adventurer. Yet, for someone who is living his 3rd life,... more>> he lacks all common sense and acts like he is mentally challenged. Unfortunately, this is a problem with a lot of Japanese web novels. So many MCs are not just "dense" but "super dense". Obviously, they like to do this so that misunderstandings can constantly be created from nothing, but it's lazy writing and not my cup of tea. <<less
1 Likes · Like Permalink | Report
Advertisements
Leave a Review (Guidelines)
You must be logged in to rate and post a review. Register an account to get started.