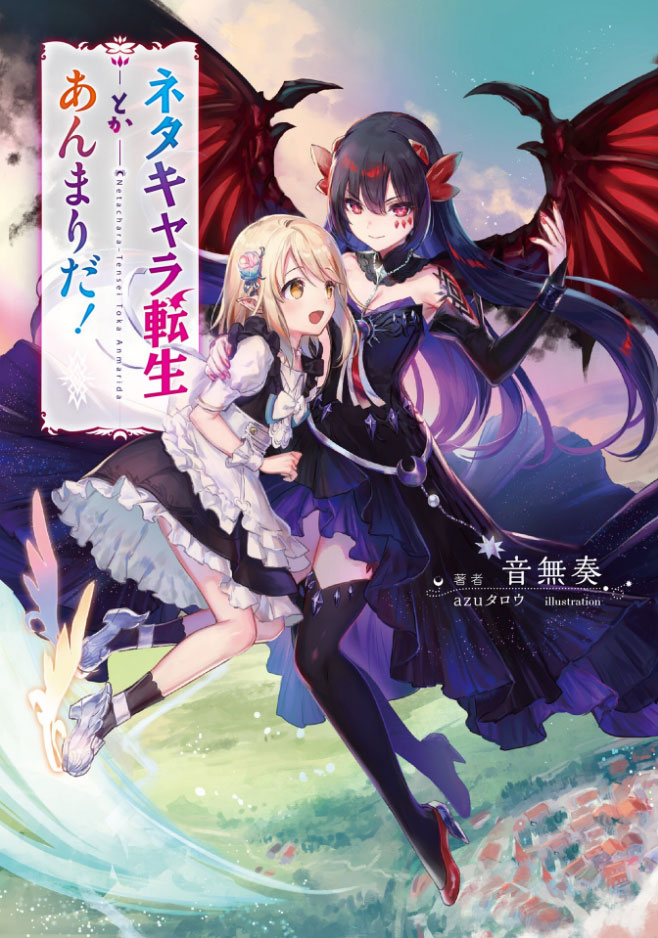 Take part-time jobs, reduce food expense, sacrifice youth, he continues to whale. Using the game as his only weapon, he, Aikawa Tooru fight against loneliness and boredom. On his way back from one of his part-time job he saved a girl from a recklessly running bus and died just like that. The next time he opened his eyes, somehow he ended up in another world, as one of his characters, Nacht. But that character was created during his dark age, fuelled with eight-grade syndrome desire and passion. This is the story of Tooru’s next life as Nacht.

One entry per line
Did I Seriously Just Get Reincarnated as My Gag Character.!
Transmigrated as a joke character is just too much!
ネタキャラ転生とかあんまりだ！

These are recommendation lists which contains Neta Chara Tensei Toka Anmari da!. You should give them a visit if you're looking for similar novels to read. Alternatively, you can also create your own list.
More Lists >>>

It's pretty good so far. Mc's interaction with her companion and sometimes her companion misunderstands her a bit. I don't really know what else to write about so I'll write what I don't like but don't dislike:
24 Likes · Like Permalink | Report

Overall I like this story and the concept. I've read the RAW well ahead and it remains interesting. Interesting premise, but not your standard OP protagonist affair. Yes the protagonist appears OP, but is lacking in knowledge of the world she is in. Also it seems the protagonist's original personality is rapidly being overtaken by the RP personality created for the game character, which results in some funny and sometimes really strange turn of events.
4 Likes · Like Permalink | Report

Pretty good so far. It follows the standard isekai start and op character who was weak in the game but super strong in this world. But I like it, a nice simple isekai that I can enjoy. It is still to early to fully judge it but by reading the manga I feel the story is decent.
3 Likes · Like Permalink | Report

this story is very much different from its manga counterpart.

it has multiple pov. It can get dark. It directly talks about cruelty of such fantasy like r*pe and child abuse as matter of facts.

protagonist has good morals. But she won't go out of her way to actively save every people. She was just drag along by her elf girl companion.

It's about an OP dragon loli got Isekaied and go to adventure with loli elf it's remind you of bear kuma but less loli and more dark? I guess since the MC can see souls and see what crime or sin they have committed overall it's still in early chapter so I'm not sure but so far it's a good read
2 Likes · Like Permalink | Report

The overall concept is good, really good. It seems like it's gonnna have a good balance of light heartedness and dark moments. If it has something to its name, its definately potential and ability to give the readers a soothing BANG.
1 Likes · Like Permalink | Report

The beginning was alright, but it got seriously strange the longer it got on. Beware of long review hidden in the spoiler : ... more>>
Spoiler

The only thing I liked about the novel's progression is the gradual change from "human memory taking over dragon body" to "human memory fades away to some sort of afterglow." That's it. The way it got slightly realistic in the way that there's zero probability of the human guy's memory actually having that much influence over a half-dragon's.

As for the way the story reads, it's too much filler. You could skip half the page down and still be on the same narration you tried to skip in the first place. The interactions seem forced, and it just reeked of pedophilia. The part with the bandits liking children was unnecessary, even to forward the plot. Seriously, bringing a young girl that's the same age as Aisha's body as a s*x sl*ve was as worthless as creating a prisoner with a dead husband and child, just to have her think of said child as her own. Despite including this, probably as the prisoner's perspective, the author tossed these characters aside the moment that portion of the story ended. What was the point of that information, aside from padding the story?

The MC even thought of Aisha in a sexual way at some point, which made me more uncomfortable than anything. I get it, nudity is embarrassing, but getting all hot and bothered by a child? Saying you're glad to travel with a beautiful girl like her, again, a 7-8 year old? The passersby looking at Aisha in her maid outfit because she was pretty, even though she has the body of a 7 or 8 year old, was even more unnecessary. "Ooh look at this child in a strange outfit, so pretty! Oooohhh." No. A few people? Sure. The whole street? Even more no. Just because she's 20 doesn't mean her mentality is of a 20 year old human. She's still a child in her race.

I mean, even the interaction with one of the two great nobles in the free market city was bland. Because Aisha had never before seen jewelry you're going to send guards to a visitor's home? Does this make sense? She has enough influence to commission accessories with the highest quality materials, but insists on jewelry with unknown looks and materials. What???

The morality included in the dialogue with each incident was unnecessary as well. All of it, unnecessary. A dragon, meant to maintain the world order, comes to get rid of an anomaly that appeared, said anomaly has a bunch of this world's beings around it, what does it do? Obviously attempt to eliminate the anomaly at the expense of a group of humans, all in order to maintain world order and the balance of power. Why is it's sole purpose being questioned by a 20 year old half-elf that is also considered an anomaly due to her contract with Nacht? It didn't even understand, or comprehend, Aisha's point, so it can't be held accountable for actions seen from a human perspective. The morals in this novel, when they do show up, fail to showcase a solid set of values and instead end up making the MCs look naive and clueless.

Not a lot translated so far but I read ahead and the writer really subverts a lot of expectations, which makes for an enjoyable story with fun characters. The Main character Nacht is overpowered, but that's half the fun. To see what you think will be her simply thrashing her enemies turn into something more deep and meaningful.
0 Likes · Like Permalink | Report
Leave a Review (Guidelines)
You must be logged in to rate and post a review. Register an account to get started.

THE PUNISHMENT OF THE GODS OF...

the legendary warrior with a system