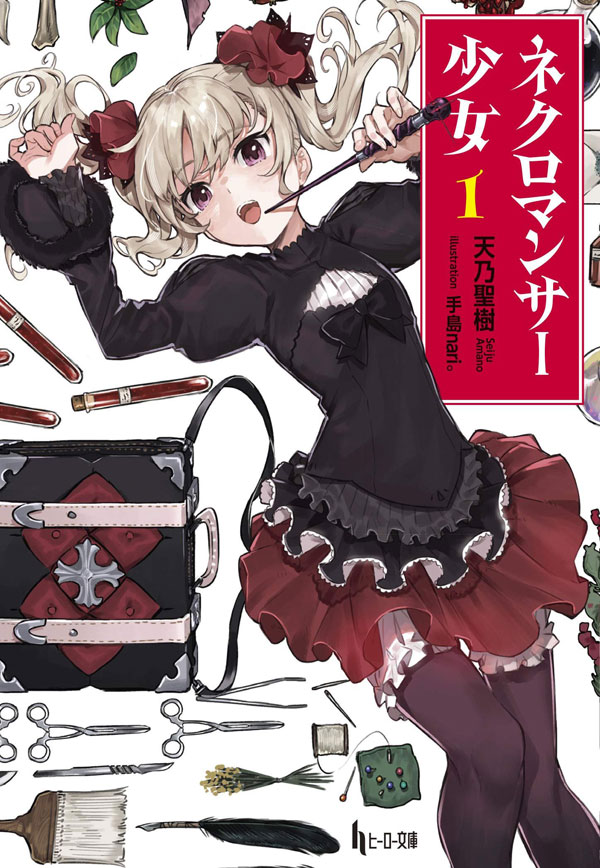 Status in Country of Origin. One entry per line
31 Chapters (Ongoing)

Just because the other members thought she was disgusting, Nene, 14 years old necromancer was kicked from the Hero party. In order to revenge and to get brilliant future, she killed herself and return to two years ago. She decided to play her strongest second playthrough.

Manipulating undead swordswoman and dragon corpse with necromancy magic, and using knowledge from first playthrough to trigger the events ahead of the Hero party. Because it was her second playthrough, she can save people and town that she couldn’t save before.

Before one knows, the immoral hero party fell down and Nene was adored more than the heroes.

These are recommendation lists which contains Necromancer Girl’s Strongest Second Playthrough. You should give them a visit if you're looking for similar novels to read. Alternatively, you can also create your own list.
More Lists >>>

MTL that was lightly cleaned up by someone who doesn't have a good grasp of English. It's difficult to read. The story itself isn't that well written either with lots of inconsistencies. For example, supposedly necromancy is generally disliked, yet the MC could casually buy necromancy magic tools and stuff at the local equipment shop. Then there's also the thing about the MC being 14 years old, yet knows and can use high teir necromancy techniques and forbidden spells.
11 Likes · Like Permalink | Report

A cute, fluffy story with some yuri elements if you're willing to suspend some disbelief. Although the MC rebirths to the past, pre-rebirth she's only 14, she only went back 2 years, and she seems to have way too much knowledge and a much clearer memory (that one might even call a perfect memory) than one would typically have. ... more>>
Spoiler

It seems somewhat unrealistic to me that she would remember the exact location of every single place. Especially strange is that she is somehow able to remember the exact layout of the vampire's mansion, despite probably only having been there once and also having entered from a different location. It was also an event that happened two years ago, and who would remember the layout of a house that they visited once two years ago? If you chalk it up to having been in her diary - how was she able to stay in the mansion long enough to get enough sense of the layout to draw a map in her diary (since she's basically a s*ave to the Braves) ? Wouldn't it be strange for her to be studying and memorizing her diary (because what's the purpose of the diary if she's just going to memorize it) ?

Such things are not particularly satisfactorily explained, but if you can ignore it, then the story overall should be fine.

[collapse]
I would say that the focus is a bit more on the relationship between the MC and Flan and only slightly on the storyline of "overtaking the Braves." The story itself isn't too action-packed, and the fight scenes are alright. <<less
0 Likes · Like Permalink | Report

The story isn't flawless and has its fair share of issues. The fast pacing of the story is kind of an issue at first but later on it kind of fits with the story. I also wish we got more stuff out of the girl the MC revived such as it is a while since she died and goes back to towns she was known and people are surprised to see her. I am wanting to her reunite with her parents I also think it may have been good if the... more>> story had the MC resurrect a former Princess/warrior. Someone known in history. Things like the MC knowing all these really OP things with only the mental age of 14 is an issue. If the story was the MC being thousands of years old after all the Necromancers have died and either get sent back in time by god or she finds a spell to go back in time. I think this could've solved the issues of why the MC knows all this stuff that can destroy nations with ease. The story isn't great but it is fun. <<less
0 Likes · Like Permalink | Report

This seems to be the girl version of wish-fulfilment stories. It is light and fun and easy to read. The TL is fine, and better than most. The story seems set up to be a long quest line, only the MC has gone back in time and knows most of what needs to be done without stumbling around and waiting to be given each step of the quest. Still, it is written in a quick-read fashion, with 1 to 4 chapters per episode one can pick it up and put it down... more>> without trouble. There also seems to be a semi-awakening to lesbian feelings here (not sure what the official genre name might be). The style seems consistent to me throughout the first 20 chapters - so the first few chapters will let you know if you will like the rest. I am looking forward to any future chapters. <<less
0 Likes · Like Permalink | Report
Advertisements
Leave a Review (Guidelines)
You must be logged in to rate and post a review. Register an account to get started.