Novel Updates
RegisterLogin
Theme
Search
Your changes has been saved.
Advertisements
My Weibo Page is Able to Tell Fortunes

Home >
Novel >
My Weibo Page is Able to Tell Fortunes 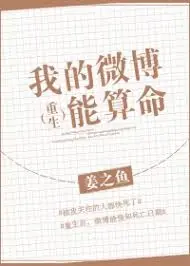 Status in Country of Origin. One entry per line
170 Chapters + 3 Extras (Completed)

After rebirth, Shen Yuanye discovered that her Weibo page was able to foresee the future.

……Eventually, the foreseeing function of her Weibo page had upgraded.

“Film Emperor Zhang and Empress of Pop Li, who fights everyday……are actually in the same Portrait of the Deceased?”

“Singer was killed……the murderer’s shoe was photographed at the death scene?”

“The new young actress and the Film Empress……died at the same time?”

Jiang Pan: Why do you not follow me on Weibo?

That was because she did not want to see both of them together in his Portrait of the Deceased after she followed him on Weibo. I shall unfollow you, unfollow!

One entry per line
我的微博能算命

These are recommendation lists which contains My Weibo Page is Able to Tell Fortunes. You should give them a visit if you're looking for similar novels to read. Alternatively, you can also create your own list.
More Lists >>>

This story was alright. A fair warning, the focus on the romance is minimal. Most of this story is the FL using her new power to find murderers for the police, a smaller part of the story is about the FL going about her daily life as a model, an even smaller part is about the conspiracy on her life, and finally there is a teensy part about romance. The FL is cold and initially she doesn't want to help catch criminals cause she fears for her own safety but... more>> eventually she realizes that she can't watch people she knows get hurt so she gets more involved. Later on, she softens up a bit and starts to help with cases with people of people she doesn't know personally. The ML is a cop and because they're both people who show their affection so understatedly, it's not even clear that he's into her lol.
Spoiler

They don't get together until the last chapter. They have one almost date before then where they only ate dinner lol.

[collapse]
The murder cases are pretty simple and the story progresses like a cop show with a case of the week that needs to be solved. In many ways this reminds me of a J-drama based on crime where the romance takes a back seat to the police work. <<less
4 Likes · Like Permalink | Report

I really like the novel. Not only about fortune-telling but also about murder cases. MC helps the police to solve cases and helps friends or colleagues who will have an accident. Even though it's too fast every time to solve a case, but after all it's still understandable. The romance is so slow that until chapter 100 there isn't even an emotional development. The novel is more criminal than romance, and modeling is not too highlighted.
2 Likes · Like Permalink | Report

A very very engaging story which I am happy that it has been taken up by one of my favorite translators. The story is more of a crime thriller than a love story; it is not fluffy and at times, it is quite dark. But it is very engaging with characters that are well-rounded and not one-dimensional. The FL is very astute and doesn't use the newly gained power to be arbitrary or headstrong. She is also quite cute when interacting with the ML who can be clueless at times... more>> when it comes to romance. Please add this to your reading list and you won't be disappointed. <<less
2 Likes · Like Permalink | Report

This one is really good if your into reading crime shows but if you’re looking for romance then probably read something else. The crime mysteries are pretty interesting though so if you’re into thrillers this would be pretty good.
2 Likes · Like Permalink | Report

Good Read! I read everything in just one day. We have a clear idea of MC's and ML's character though they could have developed their relationship more.
1 Likes · Like Permalink | Report

Very well-paced novel that follows Shen Yuanye and her adventures on Weibo. I really like how it kept me hooked because a lot of novels feels like a slog to get through in the middle parts. It is to the point that I don't think the chapters are enough but it was also a good choice to end there ... more>>
Spoiler

[collapse]
The criminal cases SY and Jiang Pan are involved in are good. Though I have to admit that if you prefer reading crime scene novels where the readers are given enough infornation to guess the criminal then this novel doesn't quite do that. It is nonetheless a smooth read and there are a ton of cases tgat are memorable. I guess that most of the reviews have also mentioned about the romance of MC and ML. The author tried to give hints but it didn't really stick to me as a reader. Rather I think this is because we didn't really see the ML much aside from his connection to MC. The author does enough to make Jiang Pan dependable and trustworthy for Shen Yuanye to give it a try.
Spoiler

I guess that one of the qualms people have is the fact that the lack of the development of romance between the two leads can make some reader think that SY is only trying a relationship because she saw in the future that they got married (he died of old age on her tombstone).

[collapse]
I do think that they could have had added more chapters/arcs near the end when MC narrows down the identity of the person who wants her to be. Overall, it is a good read! I really enjoyed MC, the crime scenes and her modelling career. <<less
0 Likes · Like Permalink | Report
Leave a Review (Guidelines)
You must be logged in to rate and post a review. Register an account to get started.

The Time I Got Reincarnated as...
Advertisements