Novel Updates
RegisterLogin
Theme
Search
Your changes has been saved.
My Pervert Roommate 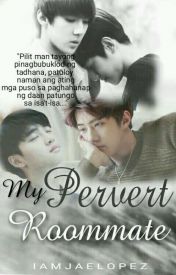 One entry per line
Iamjaelopez

Status in Country of Origin. One entry per line
50 Chapters + 1 Extra (Completed)

One entry per line
Wattpad

How will Blake try to get along with his pervert roommate, Sehun? Let’s find out.

Blake: Stop teasing me, Sehun. You’re going too far. If the time comes that I can’t stop myself, I’ll definitely break your manhood!

Sehun: Please don’t do it, Blake. You wouldn’t have anything to eat anymore if something did happen.

Blake: Wh-what did you say? What will I be unable to eat anymore?

Sehun: I kinda like your lips. So soft and sweet.

Blake: Darn you pervert! Be prepared for me!

One entry per line

These are recommendation lists which contains My Pervert Roommate. You should give them a visit if you're looking for similar novels to read. Alternatively, you can also create your own list.
N/A

Even though I quite like BL novels here on nuf. This one is a no for me. I hardly made it to chapter 10 because the cringe & cliché were too much already. Though this might not be my cup of tea, some might actually like the cliche weak, feminine, poor & kind uke who easily gets bullied by the rich, handsome & as*hole seme. Also just warning to some readers that this is on first person point of view. The flow of the story is also not that great. It's gives me a bunch of "what?? " Moments. Especially when the chapter ends with some juicy action but the very next chapter, it wasn't continued. Like it could have been a really flirty or fluffy moment but I don't know why it's faded to black, which is a shame. There are also moments when the story randomly disconnects from the previous scene
Spoiler

like for example when the seme inquired the uke about his university.

The uke was bashful because of the seme's compliments alright, but then the uke suddenly said thank you for the compliment. Even when he haven't answered the seme's question about the university. And the bam! Magically the seme suddenly knew it.

i actually re-read that scene 3 times cuz it got me confused. But yea. The story didn't mention anything about the uke answering and yet somehow the seme still knew it. So creepy

[collapse]
But still, appreciate the effort of the author. After all the author's note said this story was written back 2015 when s/he still haven't have that much experience in writing. But as much as I wanna, can't give a high rating. The translation meanwhile. It's pretty okay aside from the fact that they randomly bold out sentences even though they're not dialogues, which confused me for a bit. Advice to the translators, use Italics For the characters thoughts you wanna highlight and bold for the characters dialogue so the readers could easily distinguish which is which.
15 Likes · Like Permalink | Report
Leave a Review (Guidelines)
You must be logged in to rate and post a review. Register an account to get started.