Novel Updates
RegisterLogin
Theme
Search
Your changes has been saved.
Advertisements
My Entire Class Has Been Reincarnated – I Became the Weakest Skeleton!

Home >
Novel >
My Entire Class Has Been Reincarnated – I Became the Weakest Skeleton! 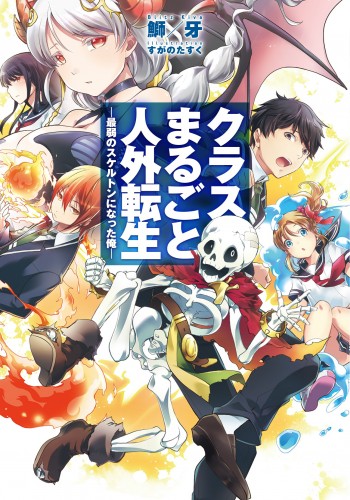 One entry per line
Blitz Kiva

One entry per line
Sugano Tasuku

When I opened my eyes, I somehow was in a monster house! The class idol became a slime! That quiet librarian girl became a succubus! And I became a skeleton…Everyone reincarnated into strong and awesome monsters, yet I am a useless protagonist. This is the story of how he who became a weak skeleton will rise in status within his class.

Demon Girl ~Tale of a Lax Demon~ (1)
Hone no aru Yatsu (1)
Reincarnated as a Dragon’s Egg ～Lets Aim to Be the Strongest～ (1)
Reincarnated into a Werewolf, the Demon Lord Servants (1)
The Spearmaster and the Black Cat (1)
Lv1 Skeleton (1)

These are recommendation lists which contains My Entire Class Has Been Reincarnated – I Became the Weakest Skeleton!. You should give them a visit if you're looking for similar novels to read. Alternatively, you can also create your own list.
More Lists >>>

Quite a nice read. I occasionally had a hard time keeping the characters straight, but other than that no complaints about this story. The struggle to survive in the new world, and dealing with the social aspects of the group as would be expected with such a change. It's a mix of slice of life with some combat, but the focus is on the characters. And the characters are all quite good in their own right, some are rather two dimensional; especially the side ones. However eh, I don't hate... more>> this MC. Says a lot considering how many main characters in reincarnation/moved to a new world are just complete and total garbage of human beings. <<less
23 Likes · Like Permalink | Report

It is strangely amusing. Everyone in the classroom was changed into various monsters.. And this is about group survival story. With each unique characters and their interaction on their changed social standings. Unkown world full of dangerous monster. And like ussual, I find how a weak MC struggling in survivals are more fun to read then an OP ones. The MC is also quite likable.. He is kind, but he is also brave. He didnt mind supporting his friends in need even though he is the weakest existance. In this little society that... more>> is made of teenage boys and girls that is quickly crumbling away.. <<less
15 Likes · Like Permalink | Report

I really wanted to enjoy this LN, but it's just has some flaws that made me drop it after the second/third arc. So, take this review with a grain of salt since things might've changed after I dropped it. First off, if you enjoy extremely positive and optimistic MCs, then you'll enjoy this. The problem for me is that the MC is just too positive and optimistic. Don't get me wrong, he has his moments where it feels like he acts like a real person capable of disappointment and anger, but... more>> then he just immediately lets things go. In fact, the story had a huge potential to make him feel more in-depth since he gets turned into a skeleton, but that gets swept under the rug and makes him feel more like an observer for everyone else.
Spoiler

At the very start of the reincarnation, you get a glimpse that this might actually be a tragic hero with complicated emotions. He states that he doesn't possess any senses, he can jam his fingers into his eye sockets and still see, and he's extremely weak. The problem is that rather then have him go through that emotional collapse since he lost nearly everything that makes him human, even more so than most of his other classmates, he brushes over it immediately. He becomes a one-dimensional character used to become a crutch for everyone else to stand on. The MC doesn't feel like an MC, his entire purpose is to make everyone else look good. And, that could be made interesting... except, he seriously has no problem with it.

I believe at one point, he even admits that he knew that the friend that betrayed him was always really just using him to make himself feel better, but he doesn't have a single reaction to it. I could be wrong, though since it's been a while.

[collapse]
Another thing that bothers me about the MC is that he's only around to make everyone else shine. That's not inherently a problem, but it feels like it takes it to the extreme. It doesn't feel like he himself is progressing in any way. This is just a matter of taste, so this may be up your alley and I recommend giving this LN a read. The romance, as far as I've read, feels unsatisfying as well. One girl gets all his attention, while another's entire existence is just to say, "I'm so jealous!" Maybe it's suppose to be more along the lines of comic relief, so who knows. TLDR; The LN isn't that bad, if a bit cliche here and there so you can predict certain foreshadowing long before things happen. The story goes emotionally in-depth.. kinda? I'd say that this LN is more focused around the characters around the MC and the MC himself is just.. kind of there. <<less
9 Likes · Like Permalink | Report

Pleasantly intriguing. What I love is the story and the character development in every chapter. The story is very casual and laid back similarly to lazy dungeon master n death march, plus progression in the story is solid and moving steadily without any plot hole... then again I've only read up to c15 so I don't if it'll change later on. Each chapter is long thus leaving u satisfied, one downside is the update is sporadic with gap for each chapter other than that the translation is good, no obvious... more>> spelling or grammar error. You can read it smoothly without a headache. <<less
8 Likes · Like Permalink | Report

So far, each arc has a smooth, cohesive plot. The first arc was well-written and felt like a movie script. The second major arc is still in progress, but I have high hopes for it. An entire classroom of students are reborn as monsters in a foreign world. They have no idea where they are and have to struggle to survive as they adjust to their new abilities. Unlike a lot of other fantasy reincarnation stories, there is no helpful stat system or cheats to explain their abilities or how to... more>> do things. They struggle and squirm and figure out things by luck and chance. Of course, the class hierarchy is thrown upside-down as everyone's looks and abilities are different from before. They have to discover how they were sent here and how to return home. Not to mention, they need to learn how to use their abilities and possibly return to human form. Some reviewers have complained that the MC is very gentle, accepting, and forgiving.
Spoiler

Later on, we learn that he is just very empty and has no passions of his own, which is why he was turned into a skeleton. It seems their personality flaws from before reincarnation heavily influenced the monsters they were turned into. In order to become stronger, they have to face their flaws head-on and work to change themselves. This will be great for character development as the series continues.

[collapse]
This is an entertaining adventure story with a large cast, but each character has an individual personality. The comedy and action are good as well as the decisions each cast member makes. It will be interesting to see how things turn out in the end. <<less
5 Likes · Like Permalink | Report

All in all, this series is a time-sink if you're looking for one. It ranges between a little boring at worst and a little interesting at best with some major disconnect between the setting and the actual story. This is a high school drama novel with a fantasy setting, but the fantasy elements are mostly relegated to background details. The characters are transported to a savage, hostile environment that should by all rights kill them off, but instead they seem to be having a relatively easy time, so much so that... more>> high school social drama is their main concern. The setting just doesn't match the tone at all, and everything seems boring when you know nobody's going to die or even get hurt too badly. <<less
4 Likes · Like Permalink | Report

Wow, let say interesting but not adrenaline rush /thriller. That what I can say after reading few chapters. MC can say no brain. The genius is the class idol who she turn into slime. The story is about try survive in fantasy world. That all.
3 Likes · Like Permalink | Report

I really enjoy Japanese light novels, when it is written as a light novel. Sadly, I can't enjoy one that is written as if it were a manga. Almost more like a screen play than an actual novel. A focus on Sound effects + Facial expressions, and short meaningless conversations that has little stylized story telling. The idea for this story is great. I would love to read a story about it, or use the pictures in a manga to supplement shallow story telling. But sadly, it falls short.
2 Likes · Like Permalink | Report

A unique story without MC being OP cheats. The students did not end with killing each other like most classroom transportation but there is still prejudice with the strong and beautiful toward the weak and ugly. It's a okay read, until the end of the first arc that is after their dungeon completion. The rest when they start getting contact with humans isn't that appealing. It gone downhill for me when MC goes on about forgiving the traitorous former friend who is now the beautiful one and saying he understand him.... more>> There's a limit to forgiveness. <<less
2 Likes · Like Permalink | Report

Unsatisfying. Feels like writing by a chuunibyou. Seriously I thought it will be good when I began, it started to go downhill very quickly. The plot becomes very clique and I wouldn't have disliked it even so, felt like the author is forcing himself to make unique plot. There's mostly no change to their abilities and the protagonist himself feels very bland. But what irks me the most is romance, there was supposedly a harem tag for the series. But it's all about one girl shining. Welp anyway it's not... more>> my taste. Just take this review with a grain of solt. <<less
0 Likes · Like Permalink | Report
Advertisements
Leave a Review (Guidelines)
You must be logged in to rate and post a review. Register an account to get started.

Tome of the Mind (Tomes of...
Advertisements