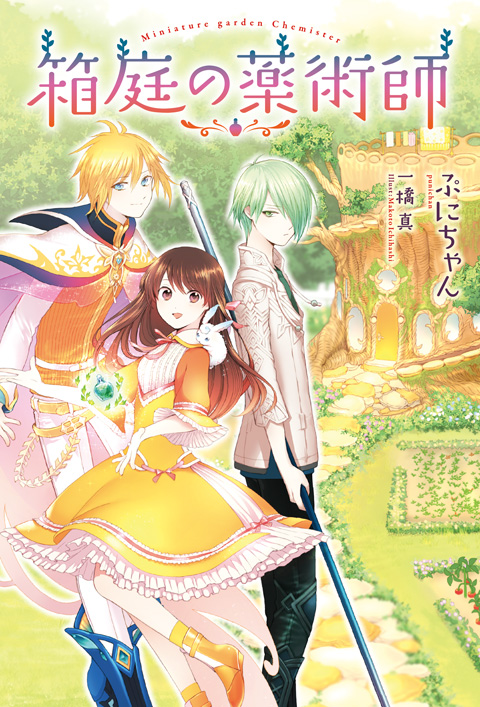 The exchange condition was to become god’s toy.

In return for helping her younger sister, Kusunoki Hinami was sent to this world. In this world, gathering ‘points’ and helping god was her role as a toy.
Being weak in combat, Hinami receives god’s blessing and lives on this world.
Fortunately, she had the rare talent of a ‘chemister’. With that skill and god’s blessing, she creates top-quality potions and succeeds in growing herbs that no one has managed to raise before.

That Hinami also goes on adventures with her friends…… this is a heartwarming manufacturing type fantasy.

One entry per line
箱庭の薬術師

The Saint’s Magic Power is Omnipotent (LN) (3)
Drop!! ～A Tale of the Fragrance Princess～ (LN) (2)
I Shall Survive Using Potions! (2)
The Last Surviving Alchemist Wants to Live Quietly in the City (2)
The Elf Is a Freeloader (2)
Demon Noble Girl ~Story of a Careless Demon~ (1)

These are recommendation lists which contains Miniature Garden Chemister. You should give them a visit if you're looking for similar novels to read. Alternatively, you can also create your own list.
More Lists >>>

It's a cute and fluffy type of story. MC has OP crafting skills and the like which is great! But geez, she sure can annoy me easily. ... more>>
Spoiler

MC is supposed to be a responsible working adult. Yet when she's sent into another world she turns into a very childish character. It feels like I'm reading a story about a five year old instead of a 20+ adult woman. Then there's the part about her not setting foot outside her home for two years. I understand that she's scared of getting hurt by the monsters but she has a whole LOT of high quality potions to use in case she does get injured. Potions which she can easily make with her cheat skill. Ughh, characters younger than her are more mature than her as well! It's really hard to continue reading the story or even enjoy it when I'm constantly annoyed with her.

The story is light hearted and fluffy. The MC is a bit childish without being annoying, and a genuinely good person. MC gains favours from god for crafting but excessive time isn't wasted on the minutiae of the crafting system. It's a bit early to say, but it's very much a "daily life" story, I wouldn't count on any focus on politics or fighting. (I have not read the raws so who knows what'll happen.) Solid translation. The whole "god's toy" thing is a tiny bit gross but I'm being... more>> oversensitive, it really doesn't play out the way that choice of words implies at all. It's just nice, stress free fluff. You probably already know if this is something you'd like to read. <<less
12 Likes · Like Permalink | Report

Super fluffy, the MC is childish, but not annoying. She also reacts similarly to how a normal person should act. Also, the 'God's Toy' thingy is just an excuse for god to watch and dote on the cuteness of the MC.
6 Likes · Like Permalink | Report

Because this translations was stopped or hiatus, I did actually read the raw. This is good, slow pace, kinda slice of life, but until end, the MC involved with the braves party.

Well, reason for give 4 stars are her friend (from guild adventure) Tacto, well, there's no any news or his figure since accident in hidden dungeon (in south? Forest) and royal fruits. Also, she get some power from spirits, but eventually not used.

Well, all in all, this good, have a bit humor also light heart with romance between Ligris (who adore and doting her) and Hinami (who eventually did realize she did love him).

This novel is really good so far. I don't want to spoil anything so I'll keep it obscure and brief. It is good, but the plot is rather slow in development and the update time is sporadic and inconsistent. Meaning, despite how good the novel is, I don't know if it's worth agonizing over when it'll update.
2 Likes · Like Permalink | Report
Leave a Review (Guidelines)
You must be logged in to rate and post a review. Register an account to get started.