Novel Updates
RegisterLogin
Theme
Search
Your changes has been saved.
Advertisements
Mimizuku to Yoru no Ou 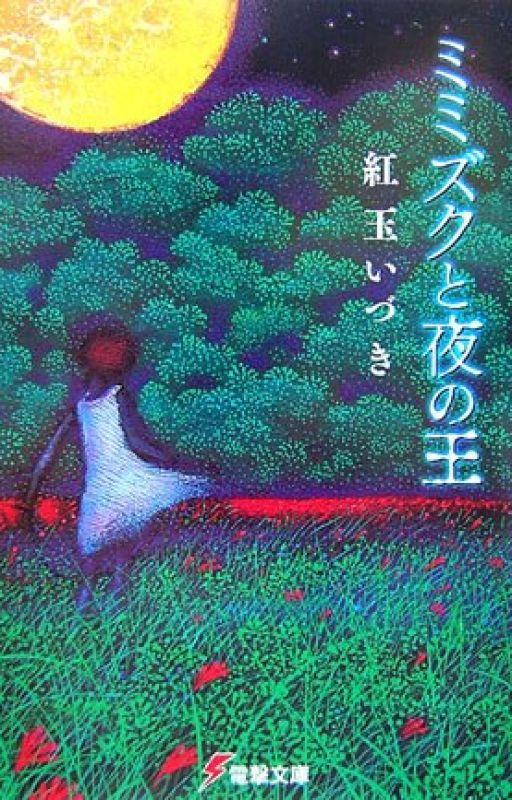 One entry per line
Isono Hiroo

Mimizuku, a small girl with chains on her wrists and ankles and the numbers “332” branded onto her forehead, wanders into the Forest of Night seeking to be eaten by a monster. However, when the ruler of the monsters, the mysterious and beautiful “King of Night,” refuses to eat her, she tries to formulate a way to convince him otherwise.

One entry per line
Mimizuku and the King of Night
ミミズクと夜の王

Dokuhakihime to Hoshi no Ishi (Sequel)

These are recommendation lists which contains Mimizuku to Yoru no Ou. You should give them a visit if you're looking for similar novels to read. Alternatively, you can also create your own list.
More Lists >>>

This is one of the few non romance novel I have read that had such heavy relationships. It's a sharp contrast to the usual cliches of happy lives, op powers or hating the world. Although we have all read and enjoyed/hated those kinds of novels, this is like an entirely new perspective to me.
Spoiler

Mimizuku, a young girl who seems to be about 8 or 11, has lived an incredibly torturous life. She was treated as a s*ave in her "village" that was actually just a group of thieves. She is forced to dissect the bodies of the people they killed so they could sell the organs. She worked her whole life while being treated as live stock. Barely any food, chained at birth with chains that have been forged onto her, and branded on the forehead like live stock. The village eventually gets pillaged by another group of thieves and just when she's about to be taken away by someone to be a s*ave, she stabs him with the knife she always carries for the body dissection. Then she runs away to the Forest of Monsters.

Now we're through all of the exposition. (Keep in mind I'm putting these events in order; this is where the story actually starts.) In the forest of monsters, we see her point of view on everything. Now, if I know abused mc's, normally, this is where they seek revenge on the world or hate the world/humanity. This girl, this tortured little girl, is somehow a bit pure and innocent. She doesn't seek revenge or really hate the world. What she sought in the Forest of Monsters was death. To be eaten by a monster so she would "forever be beautiful." She had already seen the deaths of many people and grew fearful of ending like them, rotting bodies. So she sought a monster to eat her without leaving a trace to forever remain beautiful.
She sees a monster and immediately asks it to eat her. However, the monster, Kuro, does not. Later on she meets the King of the Night. She does the same, "Please eat me." Instead of being scared, fearing for her life, she embraces the idea of death by monster because she thinks that she will never truly die that way.
Slowly though, she starts to like the King of the Night, Fukurou, more and more. She starts to like him more and more while Fukurou and Kuro both start to like her more as well. She finally develops a small will to live instead of be eaten.
Later on, she's brought to human civilization. Thought to be "rescued from the Demon King" by the people. She had her memories sealed by the Fukurou when humans came to "save" her and let himself be caught. This gave her the chance to live happily in a normal life. She experiences the happiness of a normal life. When she regains her memories, she is given a choice. Live a normal happy life, similar to the fluffy lives of other cliche protagonists in other novels where they are op as f*ck, but let Fukurou die. Or, go back to the forest with Fukurou and leave behind this bright and normal life with humans.
The choice is of course obvious, but even as I knew what she would choose, it shocked me when hearing her view on her choices. She could choose the life that is so cliche in other novels that the similarity just shocked yet somehow disgusted me. However she chose the life that would undoubtedly be harder but still brought happiness and let her be with Fukurou. I cannot stress how much I love this novel because this girl was tainted yet pure. Tragic yet happy. Naive yet jaded beyond her years. Ignorant yet sharp. She has so many contradictions that she seemed far more human that any of the novel I have ever read. If I could yell at every author out there right now, I would say to stop typing your god damn sh*t plot hole filled stories and take a glance through this one. The author of this truly deserves praise because they beautifully blended reality into fiction. Human and story. Not only is this a beautifully crafted story, they way they display the story is just splendid as well. The chapters are long, but they don't drag on. The story is heavy and full of different layers, but it's not crammed into blocks of text. It flows out naturally, giving the story but not treating the reader like a complete ret*rd and blatantly screaming all of the story into the readers face. Instead taking confidence in the reader to read between the lines a little bit and figuring out the story.
[collapse]

If I could rate this story higher that 5 stars I would do so in a heart beat. If you have the time, read this. The chapters are a bit long, but are completely worth it. I have to say, this novel is by far, the best novel I have ever read. It is among the shortest but I have never enjoyed a novel so much.
37 Likes · Like Permalink | Report

The story is masterfully delivered. Every single word draws you in further.
9 Likes · Like Permalink | Report

Wonderful! Enchanting! So many words of praise I would like to give to this book. Truly it reaches your heart.
8 Likes · Like Permalink | Report

Let me just say there's no 'romance' But it is definitely an emotionally provocative story. It was a good story but really short.
7 Likes · Like Permalink | Report

This novel is a gem in a dark and sinister way. The MC has a tragic background, but eventually meets a friendly beast. It is hard to say whether this novel is romantic or not, but it definitely hits you hard with emotions. Really like this novel!
4 Likes · Like Permalink | Report

This novel really got me hard. I was crying not like crying my eyes out but some sniffling off both saddens and happiness. I recommend reading home or some where private so you don't be seen crying (I read att school ?)
4 Likes · Like Permalink | Report

A beautiful little story that is simple in make but deep in feeling.
4 Likes · Like Permalink | Report

It was beautiful. I don't think I've ever cried as hard as I did when I read this with any other story. I'm in love with the characters. If I could I would give this story a million stars. Fukurou is so kind and I adore Mimizuku. I don't think this story is immature at all it's honestly one of the most beautiful things I've ever read. It's not really a romance, but the relationships within it are so meaningful it doesn't matter. If you haven't read it I would... more>> highly recommend you do. Lmao, this story has raised my standards too high, it'll be hard for me to get used to the usual stuff on here.. <<less
3 Likes · Like Permalink | Report

Honestly I find myself coming back to this story and reading it again and again. It's such a beautiful story. There's not much romance but there's so much emotion in this story. Truly a hidden gem. I felt myself grow together with the characters and I truly love them. Everyone should definitely give it a read.
2 Likes · Like Permalink | Report

This story is a masterpiece! Author Izuki weaves a simple tale, but a deep one. She tells a story of love. Not romantic love, but of a most beautiful love nonetheless. This little gem speaks to the soul.
2 Likes · Like Permalink | Report

Mimizuku to Yoru no Ou is one of the most, if not the most alluring works, that I've ever read. It's not beautiful in the sense of it having romance (which it doesn't), but it's appealing in how much emotion other than romantic love is showed in the story. I started reading this after finishing Dokuhakihime to Hoshi no Ishi (the sequel to this), so I already knew some of the characters. But even with reading the sequel first, I still found this entertaining. My point is that Kougyoku Izuki is... more>> a great author. <<less
1 Likes · Like Permalink | Report

Given the grand ratings, I expected more from this story. Little happens throughout most of the story; Mimizuku's past is tragic, yes, but inexpertly told. I recall feeling devastated at the first chapter of The Girl Who Bore the Flame Ring, but Mimizuku's story didn't have nearly the same punch. I also found the finale pretty aggravating. For some reason this supposed action-heavy and dramatic scene is full of uninterrupted dialogue à la the trope Talking Is a Free Action, which ruined what little dramatic tension there was, for me.
1 Likes · Like Permalink | Report

This is my first review, and all I can say is that this short novel is simply breathtaking. There's such a powerful impact that resonates from the words written that it feels both disjointed and smooth at the same time. I'm not very good with words, but to me this story was like a silk thread turning into an intricately woven web. And the droplets of morning dew on the web could be tears (all aboard the feels train!). The empty spaces between the web could be considered the gaping... more>> hole left in me when I finally finish reading, from the prologue to the commentary (it's so deep--I'm drowning). In short, a beautiful masterpiece. ˚‧º· (˚ ˃̣̣̥᷄⌓˂̣̣̥᷅) ‧º·˚ <<less
1 Likes · Like Permalink | Report
Advertisements
Leave a Review (Guidelines)
You must be logged in to rate and post a review. Register an account to get started.

The Time I Got Reincarnated as...

My Attack Stat is Negligible, so...
Advertisements