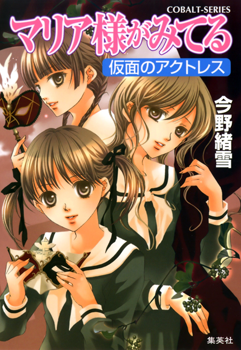 One entry per line
Konno Oyuki

One entry per line
Hibiki Reine

Status in Country of Origin. One entry per line
39 Volumes (Complete)

Maria-sama ga Miteru’s story revolves around the students of the Lillian Catholic school for girls, and can be considered character-driven, focusing on interactions between the characters rather than any sort of ongoing plot or goal to attain. At Lillian Girls’ School, there is a tradition known as the sœur system (sœur being French for “sister” ) , in which a second, or third-year student, the grande sœur (“big sister” ) , will give her rosary to a junior student, the petite sœur (“little sister” ) , and promise to look after them and guide them.

When the story begins, Yumi Fukuzawa, a new first-year student admitted to Lillian, is praying in front of the Virgin Mary statue near the school entrance when she is suddenly approached by a cold second-year student named Sachiko Ogasawara who straightens Yumi’s uniform ribbon. This seemingly simple act of kindness stays with Yumi the rest of the day, and she speaks of her meeting with Sachiko to her friends during class and lunch. After school is over, Yumi’s classmate Tsutako Takeshima meets with Yumi to show her that she took a photograph of Yumi’s meeting with Sachiko earlier that morning. Yumi asks if she can have the photo, but Tsutako says she will give her the snapshot under two conditions: one being that Tsutako can display it at the upcoming school festival, and two being that Yumi get Sachiko’s permission to do so as well. Yumi agrees to this, which sets in motion a series of events involving the entire Yamayurikai — the student council of the school. A few weeks after first meeting Sachiko, Yumi accepts Sachiko’s rosary and therefore agrees to become her petite sœur.

This officially inducts Yumi into the Yamayurikai where she assists them in school matters at the same level as the other two petite sœurs — Yoshino Shimazu, and Shimako Toudou — who are the petite sœurs of Rei Hasekura, and Sei Satou respectively. Through her activities in the Yamayurikai, Yumi becomes closer to the other members and generally finds her experiences with the group to be enjoyable.

This was the original novel that the Manga and Anime are based on.

One entry per line
Maria-sama Is Watching
Marimite
マリア様がみてる

These are recommendation lists which contains Maria-sama ga Miteru. You should give them a visit if you're looking for similar novels to read. Alternatively, you can also create your own list.
More Lists >>>

This is a dark novel series, featuring hard boiled ladies as they scheme and plot against each other, drowning in lust, desire, betrayals and tragic love. Characters die horribly as a bloody game escalates to higher and higher stakes... Just kidding. Maria-sama ga Miteru is a long (and I mean long) series that has become the face of yuri, that being of mutual attraction and romantic feelings between women. Nothing explicit here guys, it’s a somewhat fluffy series, set at a girls-only Catholic school that is full of traditions that includes... more>> a mentoring system whereby a senior takes on a junior and they become sœurs (‘sisters’). It follows the school life of Yumi Fukuzawa, a somewhat naive and scatter-brained commoner girl who had an encounter with the prim and proper Sachiko Ogasawara. After some misunderstandings, they become sœurs; and Yumi soon finds herself joining the prestigious Yamayurikai, the student council whose members are made up of the most popular and idolized sœurs. You won’t find action here. The plot is languid and tells of the gentle school life of these young women from rich families. Readers will get to know some French terms. It also probably popularized the archaic phrase “gokigen-yo” (good day to you) in modern usage. Each chapter is relatively lengthy as the author goes into detail about scenes, descriptions, emotions and relationships of Yumi’s circle of friends and onee-samas. It is written in grace, suited to its setting as characters speak in polite and sometimes traditional manner of speech that would be out of place in modern society. It’s like reading a time capsule of elite people where noble mannerisms remained the norm, and the ojou-samas are somewhat insulated from modern living (eg: fast food). It’s a slice-of-life story where nothing really dramatic happens, where people talk to each other politely even when they are disagreeable. It’s about friendship and romanticism. Almost every volume is self-contained, containing a mini-arc by itself. Is it enjoyable? For me, yes, it’s a good enough distraction. ... Yes, I also watched the anime adaptation, which is quite faithful to the novels. <<less
26 Likes · Like Permalink | Report

It's a heartwarming fantasy of female friendship and affection. Apparently, even the author says it could be called a fantasy. After all, cellphones aren't used (maybe because the story started in the 90s) and the girls are insulated from the problems of the poorer socioeconomic class. The story is character driven and focuses on the development of the individuals. I'm amazed the author can make us enjoy a story on happiness. After all, the illusion of art is that there are many flavors of darkness (whereas in real life, it's the... more>> opposite where happiness is varicolored). Fair warning to those looking for yuri, this doesn't go beyond the occasional kiss. There maybe yuri elements and tension, but it's not what you'd imagine the yuri or yaoi genre to be. After all, this is a purehearted fantasy set in the world of decency, most of the indecent stuff is only referred to in the story and left off-cam. I used to hate overly clean worlds (the denial of the darker parts), but this series does well in leaving some things to the imagination. This person explains it better: https://gargarstegosaurus. Wordpress. Com/2009/01/21/thats-not-yuri-maria-sama-ga-miteru/ IMO, I enjoyed the anime more - because it got to the point and removed a lot of extraneous details. (After all, art is when there's nothing left to take away). And as a girl not interested in girls, even I appreciated seeing Sachiko and Shimako's beauty and Yumi's funny faces. Hearing the formal and sometimes archaic Japanese speech patterns is great too. I recommend watching the whole anime (4 seasons) then continuing around volume 28 or 29. After you get to witness an unresolved soeur ceremony, you can then hunt and peck for earlier side stories you missed. There's a lot more info in the novel and we get to hear more of their inner monologues. Even the boring actual student council work that the anime glosses over gets proper mention. If you like the kind of niche, slow-paced, slice of life story like this, enjoy. <<less
4 Likes · Like Permalink | Report
Advertisements
Leave a Review (Guidelines)
You must be logged in to rate and post a review. Register an account to get started.