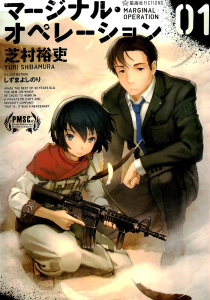 One entry per line
Shibamura Yuri

One entry per line
Shizuma Yoshinori

Not wanting to remain a NEET, 30 years old Arata decided to join a private military and security company. While having fun during the training and getting good scores, soon he has to face a real war.

One entry per line
マージナル・オペレーション

These are recommendation lists which contains Marginal Operation. You should give them a visit if you're looking for similar novels to read. Alternatively, you can also create your own list.
N/A

Marginal Operation is a great light novel, despite riddled with inaccuracies at some points (well, we are not reading fiction for accuracy, aren't we). A NEET surprisingly found his forte as military strategist. After some shocking turn of events, we find out that he is still lacking in interpersonal relationship, but many (abnormal) people chose to gather around him regardless of it. The theme, plot, and characterization are unusual. The story development is also unexpected, and I find myself looking forward to the next chapter very much. If you are looking... more>> for a Japanese LN that's out of the usual trope, I'd recommend this one. <<less
6 Likes · Like Permalink | Report

Unreliable narrator. The writing style forces me to see from the narrow view of the protagonist, but that's not a huge problem, just different. The thoughts of the people surrounding the MC, events happening that the MC doesn't know about, you don't really get any of that. It's ALL in the mc's pov so it might feel a little stifling. Other than that, the storyline is really interesting and unique. NEET becomes great military strategist but you don't really get to know the extent of his brilliance since it's in his... more>> pov and he just thinks he's being a normal worker. Characters are not really fleshed out but are definitely still developing... One problem I have is that the story seriously moves at snail pace, the author emphasizes the situations too much and it can get a little boring. <<less
1 Likes · Like Permalink | Report

An ordinary man (mc) , got in a unordinary job interview getting a not really ordinary job, and gets extraordinary exploits in that field of work because of his previously unknown beyond ordinary talent.

This conventional man, needs a job to feed this orphans, but as the fate would have it, he was given a unconventional job of becoming a freelance mercenary but due to lack of power, he end up using the children as his soldier.

[collapse]
TL;DR its new. Its refreshing and it's an ongoing series
0 Likes · Like Permalink | Report

Don't let description make you stay away from this. Yes, this is journey of a NEET, to be a man and finally to be a father. I recommend this novel to everyone who love military action. And plus for who love lolis. Seriously. This is good. I was read first volume with full expectation for the writer of Gun Parade March, and he deliver more than I hope. While throughly use in western literatures. Near-present-future is unique for Light Novel setting. Writer depict it well. As for a person who live... more>> in where volume 3 to 5 take places, I can garantee he depict situation here quite accurate. At some point it has a bit exaggerate. But I can understand it was for artistic license. MC development is the spotlight here. While retain some trait of Japanistic MC habit. His cynical point of view is refreshing from other MC, and every decision making are sastify for me. Story begin slow in a half of first volume before it put you in a cloaster ride. While climax feel anticlimax, but the twist hit me hard. This is a story that all action has its consequence. And how they live on. At the end of the story. I feel sastify. It's joyful experience. P.S. The heroine is adorable! Outshirne other women in the story. I feel like Teitoku of Kancolle would trade Yukikaze for her. (Artist joke) <<less
0 Likes · Like Permalink | Report
Leave a Review (Guidelines)
You must be logged in to rate and post a review. Register an account to get started.

Chains of the Senju Princess –...

There is Something Wrong with This...