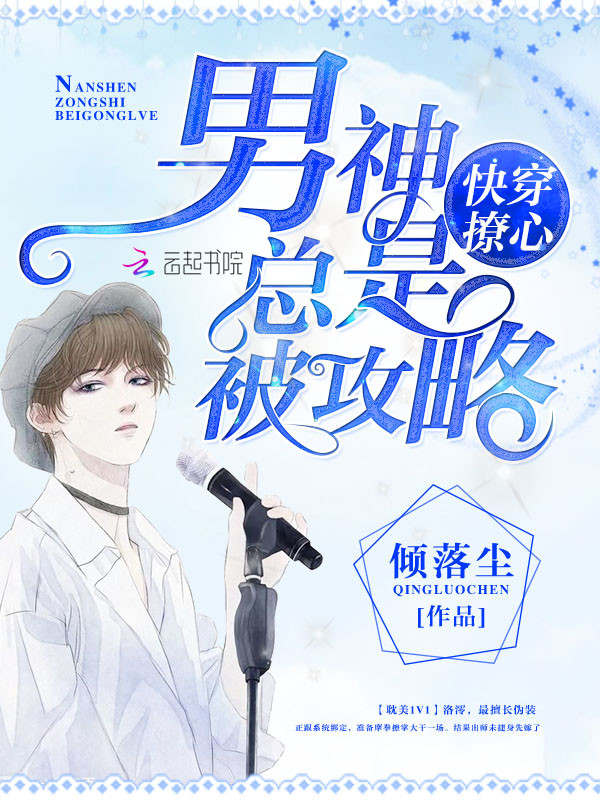 One entry per line
倾落尘

Status in Country of Origin. One entry per line
1582 Chapters (Completed)

One entry per line
QQ Reading

Luo Ling, an expert in the art of disguise, was bound to a System and was eager to begin his task.

As a result, before even successfully completing a mission, he got married!

At a 36 degree angle, Luo Ling sorrowfully looked up into space: “Tong’er, tell me, do I still have a chance to free myself?”

The person who arrived, gathered Luo Ling in his arms, hugging him from behind as he said in a bewitchingly dangerous tone: “Based on your thoughts, it seems that I have not given you enough love. So let’s proceed in exploring ways to continue a new life.”

One entry per line
快穿撩心：男神总是被攻略

These are recommendation lists which contains Male God Is Always Targeted. You should give them a visit if you're looking for similar novels to read. Alternatively, you can also create your own list.
More Lists >>>

First of all, what the heck just happened? Anyways, I decided to add a short review here since not a lot of people added their reviews since this is a relatively new translated novel. It's a slightly below decent novel to read to pass the time, and I highly agree with a lot of another user's review. They have good chemistry, a nice cute couple with one being a stubborn hot tempered cutie and the other a cold out of reach prince with a soft interior. The only problem I have with the couple is the root of their relationship/romance. Essentially, ML and MC meet when MC "accidentally" bumbs into ML and ruins his branded shirt. ML and his friends thought MC bumbed into them to in purpose to catch their attention but were dumbfounded to realise when MC just ran away after giving ML a couple of bills. After that scenario, they meet another 2 times and after which ML starts to have feelings for the MC. And I'm like "What the heck?" You fall in love with a dude after you meet him two times in like a day?? That makes absolutely no sense. And the Mc's character.... I don't really know what kind of person he is. He is sometimes arrogant, then shy, then cold and fragile which really confuses the heck out of me. I really, really don't like the majority of the side characters especially the ML & his friend's fans and other students. They come off as annoying and downright rude and illogical that I really can't take them seriously. Thankfully though, we have two good side characters which are MLs friends that aren't really annoying or irritate me in any way. An issue I'd like to point out is that the novel kinda is too long? The author could just idk make/merge chapters longer to maybe shorten a bit the novel and make it easier to read and translate, but it's just a suggestion. Overall, 3.5/5.
1 Likes · Like Permalink | Report

To be completely transparent the chapters are quite short despite it being 1000 plus so you can probably still finish it relatively quickly. The different planes were really either okay or so very boring I don’t know how anyone can finish this in one sitting as it is so gruelling to read. None of the stories were particularly memorable, they were cliche and though I can like cliche stories it was so much more boring and the cliches were just badly done. Our MC has barely any background info and even with... more>> that info he is akin to a blank slate with no definable personality traits except being money hungry and it’s not even funny when he is so what is the point of adding that trait for comedic effect if it just falls flat most of the time. The MCs “sense” when it comes to the original main characters is never properly utilised and in the apocalypse arc so far it hasn’t even been mentioned at all. The main character is not particularly smart nor has that charm that makes you love him he has the looks but that is kind of it. The fall on love at first sight thing is so bland that I don’t even get angry cause it should just be a predetermined notion in every arc as it happens in every single one. There romance is so boring and has zero spark so why should I continue if I feel nothing for either of them. The MC might as well marry the system because they have better chemistry then the main couple. The only times the MC is generally funny is when he is interacting with the system so they should leave the bland ML
Spoiler

In the illegitimate child arc, I was low-key uncomfortable with how before the ML found they were not related he was really ready to sleep with his brother. He is a predator and it is never addressed like he wanted a minor and was waiting for the MC to hit 18. Wild

[collapse]
I can’t finish this it hurts my brain and there was only like 2-3 arcs that I actually like and even then the rest of the arcs are bad so the couple I like can not pull this out of hell. <<less
1 Likes · Like Permalink | Report

Don't let the number of chapters scare you off from MTL or giving this story a chance. The chapters are pretty short and the Arcs are long. The story itself is pretty formulaic; if you've read the BG QT novel from this author, the style and plot are pretty much the same. The ML is the same in every world and he and the MC fall in love at first sight. While there is some faceslapping, this is more about the MC stealing plot points from the original MC and earning... more>> points from the ML's love. The only major difference from other BL QT novels is that the MC's golden finger is that he can sense when the og!MC is plotting against him. There's a lot of comedic timing here. And I really like the MC's relationship with the system. <<less
2 Likes · Like Permalink | Report
Advertisements
Leave a Review (Guidelines)
You must be logged in to rate and post a review. Register an account to get started.