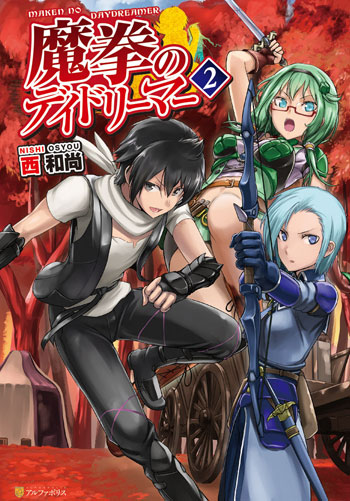 One entry per line
Oshou

One entry per line
Tea

The MC (Minato) is a college student who died in a plane crash and was reincarnated in a fantasy world. He was raised alone in the wilderness by his succubus mother, and now he tries to make his way as an adventurer.

These are recommendation lists which contains Maken no Daydreamer (WN). You should give them a visit if you're looking for similar novels to read. Alternatively, you can also create your own list.
More Lists >>>

This is a poorly written story. Dropped at 20. The narrative does not help you get immersed within the story world but instead breaks it for you. Flashbacks on almost every chapters which could have been avoided if the author just tried to write the story in a better way. The Main character is also unpalatable, I think his decisions are forced just to move the relationship between him and the first heroine which is also a bad character. I just can't feel any kind of excitement when I read this, instead... more>> it kept me irritated. You can read it yourself, I wouldn't recommend it. <<less
24 Likes · Like Permalink | Report

Started reading it due to succubus stuff, and remained for the OP stuff and comedic elements. I recommend others to actually read this, there’s no way they would hate the comedy at least.
21 Likes · Like Permalink | Report

Good story, despite a harem series relationship development is not forced. Only thing that is disturbing me is MC has no apparent goal. No revenge, no finding lost friend, no ambition, no desire for money, just a adventurer going to where the wind takes him
Spoiler

Harem has 2 members; his mom? And glasses girl

This is not a great novel at all but I'm reading it anyway, even if I don't enjoy it that much for some reasons. It started at rather funny and interesting with the part with his mother but it clearly fall in quality and 'funniness' quickly. MC is laid back in a very annoying way that does not make him very interesting and is moving in the world without any form of objective. If it was a nice and fluffy slice of life story in a fantasy world no problem but... more>> this is clearly not this kind of story. The main heroine is not that likeable (she is even annoying sometimes... No, pretty much all the times) even if the author try to make her appears cute and fragile and lovely. She's not. The story would really be better without the heroine, so it frustrate me that she is here, because I want to like the story but this make pretty much impossible. <<less
5 Likes · Like Permalink | Report

Cliche but with a good pace, likable MC and I like the no objective go with the flow thing like a true adventurer.
5 Likes · Like Permalink | Report

Looking at the other reviews, they make it look like an awfully bad novel. I think its pretty standard for a WN. Its style is lacking and really rough but its WN so its bound to happen. You guys should remember that these guys might be amateurs, not to mention they dont have editor so it seems lacking. Well as for the story, its an average fantasy genre soif you are into that read this.
5 Likes · Like Permalink | Report

Fairly standard isekai story with OP beta JP MC. Overall an okey read though the character is pretty generic though the author keeps having people notice how the MC is not "normal" since he interacts and see's the whole world as an outsider as if he's reading a "fantasy novel" or something. Though to be honest it is never ever shown in his character and after he "stops" nothing really changes. The first heroine is the usual bossy but weak partner for the OP beta MC to boss him around and... more>> tell him what to do most of the time.
Spoiler

This one did however piss me off since she is at first helped by the MC but instantly back stabs him and tries to have him lured into an ambush where he would be beaten, robbed and then sold into slavery just so she could pay of her debts, But because of OP MC he kicks their ass, but still don't really minds the attack even though he knew she was behind it.

He even goes so far as giving most of the money he made while fighting monsters to her, since she tagged a long she deserved half of it. Cause she did nothing but get helped and then back stabbed him she should get paid for it. She even asks for more and he gives her everything to help her out. Then she decides to take advantage of his powers to earn big, but eventually turns good after he saves her again. Again she is given half of the money for being saved. During this time we also find out she's been doing a bunch of shady stuff to clear her debt that she was tricked into getting. Most likely having sent a multitude of people to their graves, slavery and back stabbed only to save her own skin.

But MC forgives it all not caring one bit and in comes the N1 bossy weak heroine that owns the MC and who the beta MC always needs to bring along.

[collapse]
After this the story is mostly about the MC being super OP while traveling a long with his weak harem member that bosses him around for most of the time. Then more harem members are introduced along the way and MC mostly just steam rolls everything and is mostly just being a beta MC that is bossed around by his budding harem that is completely platonic that ties him down. To be honest I wanted to drop it after 15-20 chapters but I always try to read at least 50-100 chapters to give it a chance. <<less
2 Likes · Like Permalink | Report

Most of the time the story follows from the MC's POV and narrative. And the MC looks like an honest and polite teenagers, and even act like one most of the time. However the translator loves including crude words like 'f*ck" & "shit" especially during MC's monologue making him looks like he grows up with rude people (he actually grows up alone in the forest with only his mother). That inconsistentcy kind of ruined the fun of reading the story abit for me. Other than that the story is pretty... more>> great. <<less
2 Likes · Like Permalink | Report

This novel is pretty great, we get a unique MC who's reincarnated but the author doesn't really stick that home. The worlds pretty unique, but it's not expanded upon much. It feels pretty slice of lifey as the MC is op enough that he just breezes through the fight scenes and goes at his own pace. Anyways I recommend this as another JP reincarnated novel but with its own twist.
1 Likes · Like Permalink | Report

This Novel got potential, the elements are good, character and magic/fighting details are thoroughly described, but the problem is that the MC has no apparent goal of what he is going to do nor he is going on an adventure or exploring unknown region.
Spoiler

This is mostly cliche, but I like the cute romance and the daydreamer thing.
0 Likes · Like Permalink | Report

Not that interesting, with a cliche storyline. The MC is kind of likable but the girl in green was not. TBH, I wish the MC worked stuff out and adventured by himself first before meeting new characters. ... more>>
Spoiler

He met the girl in green the moment he became independent... Not to mention, she is clearly a future love interest. I feel like the story is moving at a good pace but it would have been better if he met her later on in the book after he has his fill of being a lone wolf.

I must admit I started to read it out of curiousity from its tags but I stayed for the humor.
The best character is his mother XD Mostly her remarks and actions in the later chapters are hilarious if you get the humor behind it.
0 Likes · Like Permalink | Report

Reincarnation story, MC dies and is raised by his mother alone, trained since really young by her, grows totally cut off the rest of the world, at age 10 he learns she's not really his mother, but kinda is, he turns out to be an incubus, a male succubus, which should be impossible and is deem a mutation.
Turns out his training and race makes him incredible OP, story ensues with a MC who lacks the world's common sense.
Story's good, could use some polish on some aspects, but is... more>> better than most that you would find. Only overarching story plot that exists turns things weird and is kinda forcefully forgotten by the characters. <<less

A Little Bunny Looking at the...

Wait? did you say the Demon...
Advertisement