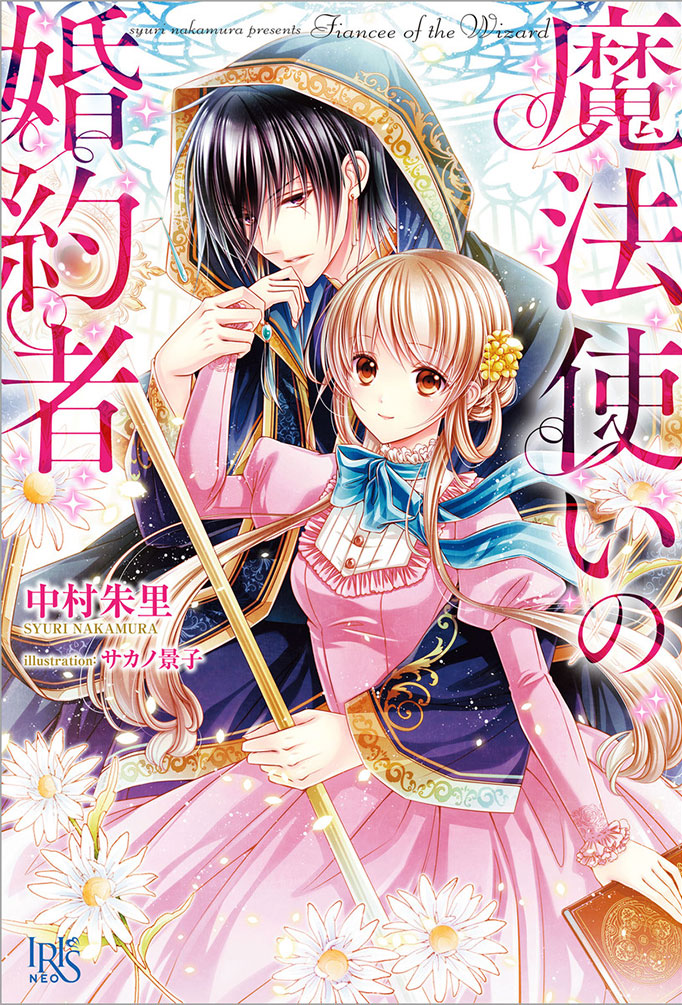 Status in Country of Origin. One entry per line
7 Volumes (Ongoing)

One entry per line
Ichijinsha

I who was reincarnated into a world of sword and magic. The revived Demon King, the Hero chosen by the holy sword─────in the middle of that unfolding common fantasy trope, the position bestowed upon me was to be the magician’s fiancée.

One entry per line
Fiancée of the Wizard
魔法使いの婚約者

From Maid to Mother (1)
Tensei Shitanode Tsugi Koso wa Shiawasena Jinsei wo Tsukande Misemashou (1)
(Um, Sorry) I’ve Been Reincarnated! (1)
Expecting to Fall into Ruin, I Aim to Become a Blacksmith (1)
I Reincarnated into an Otome Game as a Villainess With Only Destruction Flags… (1)
Tensei Shite Inaka de Slowlife wo Okuritai (1)

These are recommendation lists which contains Mahoutsukai no Konyakusha (LN). You should give them a visit if you're looking for similar novels to read. Alternatively, you can also create your own list.
More Lists >>>

I love the first volume, but the second one is just too much. ML basically won't recognize MC (his fiance then wife) in public, and therefore both of them got hit on by upper aristocrats. ML didn't want to announce his marriage to MC for fear of MC being shunned by his fans, which is stupid in itself because then he'd have all of these high-specs women chasing after him. He didn't even consider MC's insecurities for that one-sided decision. I honestly can't see him as more than a womanizing narcissistic unfaithful... more>> character, not unlike real life guys who wouldn't acknowledge their relationships in public just because they want to be surrounded by women's attention. There is no way a good guy who is truly in love with his wife would choose to hide his marriage and hurt her intentionally in the process. Not to mention the fact that he never paid enough attention to notice her troubles. Edi is by far my most-hated ML character in shoujo novels right now. <<less
12 Likes · Like Permalink | Report

This story is too beautiful! Filimina's insecurities are the part of the story that makes me shed some tears for here like "gurl ur man loves u don't be sad anymore!". The extra contents gives me joy too since they shows us the point of view of the people around Edi and Filimina.
4 Likes · Like Permalink | Report

You've probably seen it in many action series: there is an ordinary girl who loves the MC but is totally useless and just keeps crying out the MC's name. Well, this is our protagonist. You would not see her trying hard, scheming or having cool powers. She just befriends a guy, waits for him and eventually marries him. I know this is not an action story, but I'd like to see a protagonist who takes a more active approach to life. They didn't even have a heart-throbbing date.
3 Likes · Like Permalink | Report

I want to give more star but the more I've read the chapter the more its suck the first volume is pretty damn good, but the next volume it's unbearable. I didn't understand why the MC keeps herself to have not relied on her husband, I mean it is your husband. You can tell and ask everything to him. The MC always said that she would do anything by herself and don't want to bother ML, but it's TO MUCH. I mean come on did you really must disgust yourself to... more>> be a servant just to get back your bookmark. Please rely on your husband and PRINCESS a bit. You are an adult, you should know when the problem can be done by yourself and when you SHOULD ask for help to others. I give a big respect to ML that finally decided on publishing their marriage. Although I still hate the fact that he persistently hides his love relationship. And OF COURSE for those MC ARGHHHHHHH <<less
2 Likes · Like Permalink | Report

I really like the story so much and honestly I love conflict like this one when all you need to do to resolve it is talk. Love it, cant wait for more. Oh and I totally can relate with the FL so much.
2 Likes · Like Permalink | Report

Well written. That's why not 1 star, but 2. ML is an a**hole, even the worst rapists from chinese novels are better than him. He literally tortures MC mentally. I can't see any romance here at all. His twisted personality is simply atrocious. Why there is no psycopath alert in tags or summary?
2 Likes · Like Permalink | Report

At least for volume 1, this story is incredibly adorable and heart warming. I shed some tears too. Props to the translation person\team, they do an amazing job. I'm eager to see volume 2. I hope it's just as interesting as volume 1. 😆
2 Likes · Like Permalink | Report

I'm very fond of this simple novel so I was delighted to see how they improved the story in it's published form. The extra contents were a joy to discover: ... more>>
Spoiler

They expanded on Filimina's feelings in a much more clear cut manner by giving the two chidhood sweethearts' poignant interactions from the get go. Making her sound less like a neutral bystander and more of an exasperated fiancee.

Her own insecurities and complicated feelings on the matter of their engagement are shown in the original, her own actions betraying her true feelings despite the casual way she phrases things. Yet it wasn't until when she was told of his possible demise that Filimina dropped the pretense of being unmoved.

[collapse]
They show Filimina as girl in love. The translator also included novel illustrations as feast for the eyes. I'm very excited to know what the other volumes are about. <<less
2 Likes · Like Permalink | Report

This novel almost make me spew blood. It enraged me that much. The first volume was pretty good which made me have high hopes for this story but the second volume has them acting so unbearably stupid and infuriating. Neither of them communicate with each other, Filmina acts like a f*cking doormat to her own husband and everyone else and Edi is just insufferable. He claims he wants to protect her and that's why he's hiding their marriage but doesn't notice that doing so made her so insecure she's literally tormented... more>> by it. I don't doubt he loves her but he sure doesn't prove it when it's important. Don't even get me started about the third volume because I had to drop it where she accepted to be the maidservant of an anmoying half-brother of the king and effectively make herself a servant/shield for him, all because he took her bookmark. HELLO your husband and the princess is there! Say something?! You know they'll back you up! You know your husband will absolutely destroy him with the princess's approval! They were both telling her not to accept his demands too. Moron. My advice: if you're going to read this, just read the first volume. <<less
1 Likes · Like Permalink | Report

My review in a nutshell: Just read the first volume. Otherwise, if you really want to.... Be prepared that the main characters become severely stupid later on. Second volume and onwards made me question “Do the main couple truly love each other?! They hardly freaking communicate with one another! It’s been months since they get married and there is no word of children yet?!” I have never come to hate an otome novel as much as this one *sigh*
1 Likes · Like Permalink | Report

Actually 3.5 but I lean more towards 3 than 4. Well I may be judging unfairly since I only read up to the middle of v3... Well I was kind of hoodwinked into thinking this was more romantic than it would actually be when I snuck a peek at the wedding illustration. I would first like to complain that I don't like how much they need to mention how PAINFULLY AVERAGE Filimina is. It's like they want us to just feel bad for her because there is SUCH a big gap and so... more>> it would be obvious other girls fit him better. *Rolls eyes* Is it a crime to be average? Is it a rule that handsome men have to be superficial and can't love a normal girl? I am fine with ability/social gap but the demeaning looks gap theme makes me a bit mad. I wish she was just a tad bit less soft but I can understand her insecurities. As for him... I wish he could acknowledge her struggles. I even prefer the helicopter MLs to an aloof ML who doesn't even seem like he's trying. When has his cold front worked? It was his accomplishment and authority that worked for him. Wouldn't it be common sense that he could protect her better if people knew that he would unconditionally support her? Still I would not go as far as to call him a terrible asshat or psycho or bastard... He's insecure too and you can't blame him completely for not knowing how to have a proper relationship. I'm just not super happy about how they chose conflict situations after the 1st volume. <<less
0 Likes · Like Permalink | Report

Gosh. I like the story BUT the characters just aren't improving I mean vol 1 was really good but by the time I was reading vol 2 my eyebrows just kept on furrowing every chapter up until vol 3 I mean filmina is too soft and frustrating like come on she doesn't rely on her husband's help even though she's about to get mugged. She disregards her friend, the princess, and her husband's worries about her being a maidservant/shield of someone who's blackmailing her with her F.U.C.K.I.N.G. Bookmark when she... more>> can just straight out tell them that she's being blackmailed since they're all having tea together. She claims she's mature because of her mental age but she gets f*cking annoying every volume gosh and don't get me started on edi. Anyways the main point is, this novel lacks character improvement and as much as I want to love it nah the author just keeps on justifying every character's stupid actions and it's not even entertaining anymore. The translation is amazing but other than that meh. Good day! <<less
0 Likes · Like Permalink | Report

This is a sweet, cute story. Its more like a 3-3 1/2 star story. The relationship is a slow build, and while reading, you could wonder if they even love each other. They both seem oddly calm about the long seperation and infrequent visits while he becomes the great wizard. But if you consider that with his early childhood abuse and her being reincarnated, the quiet love and comfort they find in each other means that the hearts and candy doesn't need to be prolific. They seem more like an... more>> old, old married couple than the young lovers they are. Its a quick read and doesnt have a lot of action, adventure or anything really. Its quite a simple story. Its worth a read if you have some spare time and want a break between high drama stories. <<less
0 Likes · Like Permalink | Report
Leave a Review (Guidelines)
You must be logged in to rate and post a review. Register an account to get started.