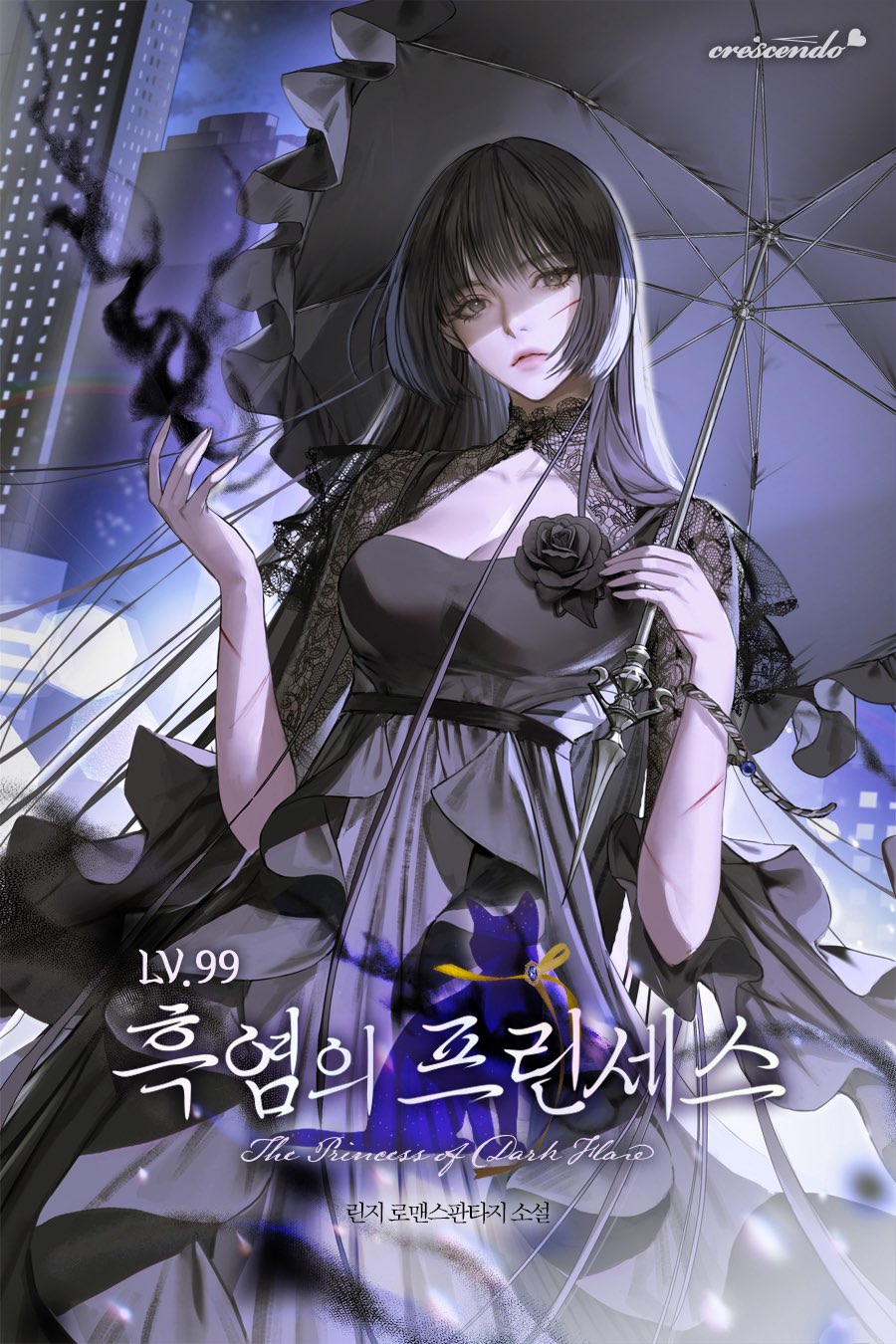 One entry per line
린지

One entry per line
Anzu

One entry per line
crescendo

One entry per line
Yonder

She came back from the unknown gate wearing only a black dress with a black parasol. A first-generation hunter, Cha Eunha, went missing 30 years ago.

In the early 2000s, they had been locked within a mysterious gate.

For someone to escape, one must stay behind…

“It’s because you have more reasons to stay alive for than me.”

Eunha sacrificed herself for her colleague Yijun, killed monsters to survive and met a man who found her when there were no monsters left to kill.

Shin Siwoo, the first S-Class hunter that she’s ever heard of.

When Eunha had managed to get out of the strange gate,

The world had changed so much.

Besides, Baek Yijun, an old colleague that she had met after a long time,

“You know what. I hate the fact that people like you are hunters.”

—was not the person Eunha had remembered.

These are recommendation lists which contains LV. 99 The Princess of Dark Flare. You should give them a visit if you're looking for similar novels to read. Alternatively, you can also create your own list.
More Lists >>>

It's one of those novels where it's quicker to read the first few chapters and judge for yourself rather than spend time reading the reviews. It's got a pretty interesting premise so far. The setting resembles omniscient reader, solo leveling, everyone else is a returnee and practically every other korean gate/hunter/game novel out there (is this the new isekai?). But I stan strong female leads ૮ ˶ᵔ ᵕ ᵔ˶ ა so I can ignore that the setting isn't particularly new. Overall, it's a 4.3/5 stars for me. Novelupdates doesn't allow me to... more>> give it that, but that's what I would give it if I had the option. If you didn't find this review that detailed, I was just writing this so people don't judge this novel by a single review. To the dude that wrote the review before me, you are in desperate need of full stops and commas. If any other readers are scrolling to read that review, I can verify the fridging part to an extent. I wouldn't describe the reading experience like a greek tragedy myself, it's just that the summary spoils the first few chapters. Other than that, I agree with what they say. Maybe it's not worth reading or particularly good, but you're better off reading the first few chapters and judging it for yourself than following the words of random dudes on the internet (especially when there's only a few reviews and random novels have 1-star ratings when there are no releases for some reason). But yeah, I've enjoyed reading it so that's good enough for me. If you decide to read it, I hope you enjoy it too. just a small rant on the greek tragedy part
Spoiler

This does not even remotely remind me of a greek tragedy because it lacks that poetic or dramatic irony that defines a tragedy in literature. We know the character is doomed to fall into the gate and Baek Yijun won't be as friendly as before, but that's only for the first few chapters; not the entire story. As of yet, there's no evidence to suggest that it will have any significant impact on the rest of the plot. It doesn't feel right to me to describe this webnovel as a greek tragedy just because the summary is too descriptive. Novels with detailed summaries typically leave you with nothing to go on for when you're reading, so that's poor writing from the author.

That said, I'm a little nervous about the tragedy tag. It's possible I haven't read enough of the novel to write this review.

This type of MC is what we've been lacking recently. MC with a genuinely good heart and doesn't have a "2nd" side to her, It gets tiring to read stuff where the MC is misunderstandingly "nice", has a more shady side or is a massively into looks not that I don't enjoy those type of stuff but this is just nice to read as it is even without those other factors that make other MCs 'relatable or realistic'.
9 Likes · Like Permalink | Report

Simple to read and it changes from others Korean tower/hunter novel. MC want to live a simple life, she honest and gentle. The novel is more realistic like the MC has a culture shock when she come back 30 years later, legally dead, she didn't in a bit know how to do this or what to do. Maybe there will have romance. I hope.
3 Likes · Like Permalink | Report

Only up to chapter 28 is translated so far, but I'm enjoying this one a lot so far. I like that she's not purposefully hiding her strength. She doesn't care about proving herself to others, but she's not concerned about hiding either. I'm so looking forward to her beginning to stomp her opponents into the ground, and I feel like the next chapter may be the start of that. Hopefully! The emotional places that the main characters are in is really well done so far too. You can see her trauma, and... more>> the guy I assume to be ML has his own trauma, of a sort that you don't often get to see with a ML, but one which makes so much sense for what we know so far of how he's grown up. His motivation for using her is not one I've seen before and again makes a lot of sense. Hard to say what will happen as the story goes on, but so far I'm really looking forward to this one, so rating it a (somewhat hopeful) five stars. <<less
3 Likes · Like Permalink | Report

This started out with some potential, and then went pretty generic. After the first 30 chapters, it feels like the same story you and I have both read multiple times now. Also, the author introduces plot mechanics, then just forgets about them for ages only to pull them back in randomly when it's useful in the plot. It's really annoying and destroys the flow of the story. It had potential, but it got squandered. I would recommend reading something else.
2 Likes · Like Permalink | Report

It is one of those usual Korean gate/hunter/game novel with op protagonist out there, except the protagonist is strong female. FC here has a tragic past where she loses her mother and she starts to become a loner who only kills monsters and hates monsters. But FC here is kind enough to save others. She sacrificed herself to protect someone else and got stuck in a gate for 30 years. For all her tragic past she does not understand the meaning of life. But she is trying to figure her meaning... more>> of life. That is probably the gist of the story. There is also hints of romance and romantic tragedy in the story. The novel seems to progress the story in a slow pace. But as much as until now the story is really good. <<less
2 Likes · Like Permalink | Report

They go to measure the super OP MC’s power level and the measurement says she’s super weak. Methods of measuring talent/power in these WNs basically exist for the sole purpose of underestimating the MC. Like, in this case, it’s not even like the MC’s power can only be used under special conditions or something.
2 Likes · Like Permalink | Report

This is one of the coolest korean stories out there. I always wanted a FL in a gate/dungeon type of story. She's really strong and just pretty cool in general. I really like her personality. The action is slow but when it does happen it's exciting.
1 Likes · Like Permalink | Report

It's alright it suffer from a fridging to a degree and while it leave an incredible first impression it's follow ups appear to be lack luster it has the constellations gimmick if you hate it don't read if you like it give this a shot and if you don't understand what I mean by constellations gimmick it doesn't really matter the main characters characterization us confusing and the mother could've been fleshed out more the absolute begining felt rushed but also pretty avg for WN still though like the interactions... more>> between the guy and her really well done gets characterization done fast realistically and endearingly of course it doesn't matter since we both know she gets stuck in a gate but you know that adds suspense in its own Greek tragedy-esque I'll be honest the action was fun until she became op or something similar the action was detailed extremely detailed mind you but much more detailed than your average WN but you know it's a Korean WN with a hunter protagonist you expect them to struggle in combat for long get real well I wish they would but eh power scaling being wack like that's new the protagonist is your life is what is life but I don't have emotions so don't care in this novel this done pretty well as well as this trope can be done not really but compared to the standard pretty nice the characters most characters shown so far have been characterized after there death which helps make it feel more important but that was busy work to do while they were alive the cat is well who didnt see it coming a mile away the guy American my favorite character but waiting for the FE3H timeskip scene till I can say for sure
I rate good out of wn and okay out of in general Just realized I forgot touch on the system just ignore it that's just a general rule to like these types of novels they'll almost never be meaningful and will always be inconsistent don't know much about this novels system since I ignored it but just keep this in mind <<less