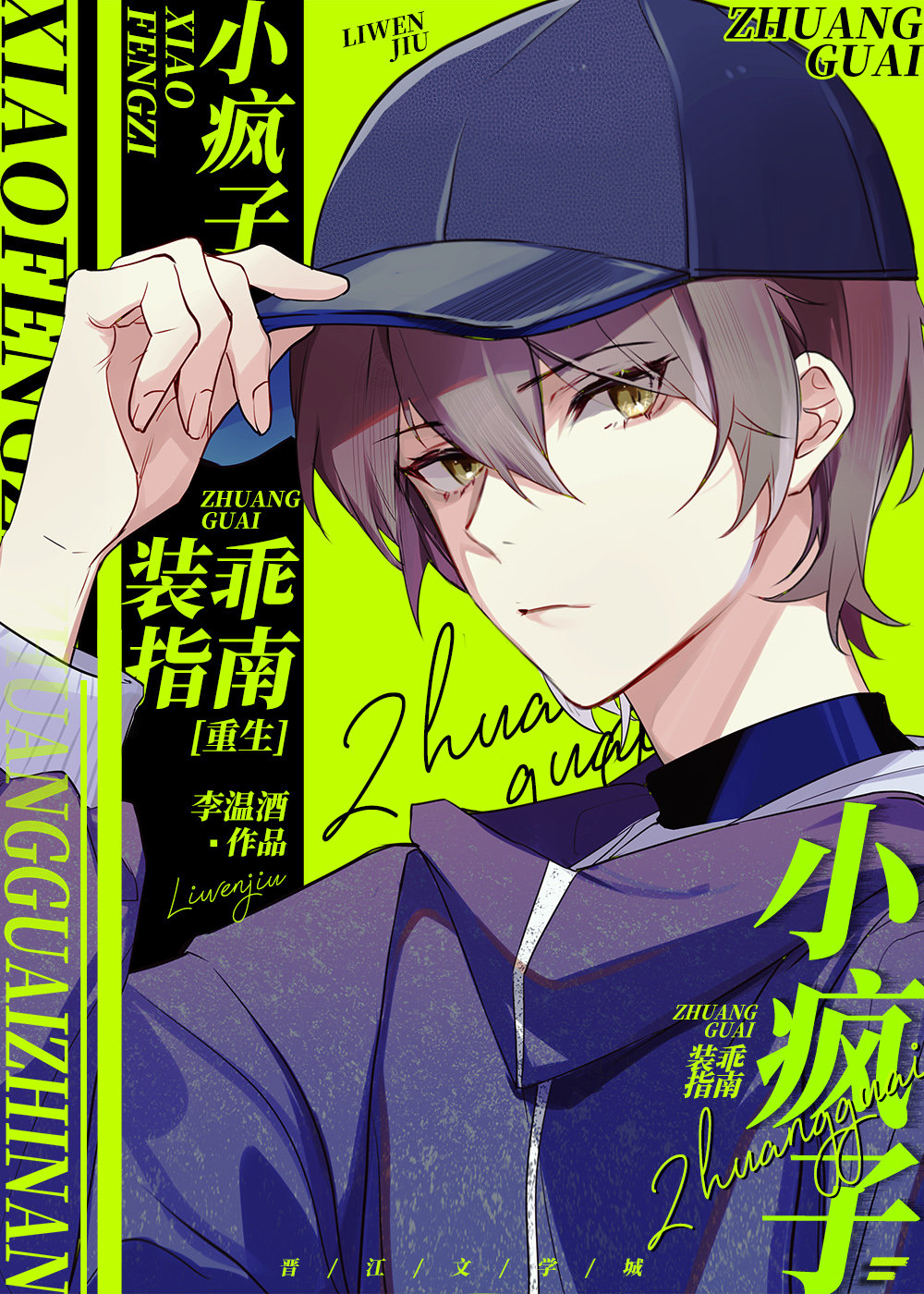 One entry per line
李温酒

Status in Country of Origin. One entry per line
112 Chapters + 24 extra chapters (completed)

Chen Qizhao was reborn and returned to the age of 18 when he was still the wicked little overlord of the Chen family.

At this time, his brother hadn’t experienced a car accident while his parents were in good health and weren’t seriously ill. The Chen family was still the prosperous Chen family and everyone thought he was a good-for-nothing who was useless and easily taken advantage of.

“He only knows how to quarrel with his older brother every day. He is arrogant and willful!”

“He looks good, but unfortunately, he is an idiot.”

“Isn’t he a useless person? Just serve him well.”

“It is a pity about that child of the Chen family.”

There were the group of scoundrel friends who were full of thoughts, the rats eyeing him covetously and the old, cunning people who were secretly scheming.

Chen Qizhao put on a mask of arrogance again. ‘Do you like acting so much? Why don’t we act together?’

It wasn’t until later that everyone discovered that at the end of the play, they would either go bankrupt or be imprisoned.

One entry per line
小疯子装乖指南[重生]

These are recommendation lists which contains Little Madman’s Guide to Acting Good. You should give them a visit if you're looking for similar novels to read. Alternatively, you can also create your own list.
More Lists >>>

I did not expect to like this story so much. It's actually a little slice-of-life, the emotional line is very subtle and realistic. One of my favourite novels for sure! I find this novel very full of substance (business/plot-development is so meaty!) while not lacking the presence of the ML as well. Although the romance is a back-burner, it's subtle and has a very cute 'crushing' feeling to it. I honestly really like how I kept expecting things to 'wrap up' in a dramatic way, like in other novels, 'oh I'll be... more>> everything to you don't worry about it!' / 'oh don't worry, I'll take care of you for life!' or some unrealistic explanation to resolve situations -- but actually, it doesn't do that. This novel is amazing, and it feels good. I don't feel queasy reading the family atmosphere even though they're not 'close' as other novels, I actually find it refreshing that it felt.. Realistic. It felt nice. Unrealistic fantasy of a 'perfect' family or even just -- a family that doesn't cling to one another and love each other completely, although there's care -- it's hard to show. I find this so gratifying to read, and I felt good. I like this novel a lot. It's underrated and subtle, but I think this novel creeps up on you like spring rain. It's a very nice novel. <<less
0 Likes · Like Permalink | Report

Great. Scheme, conspiracy, drama, suspense. The romance part is really nice; slow romance indeed, but this pace is more realistic. No OP character here. Thank you for the translation!
0 Likes · Like Permalink | Report

I enjoyed this novel very much. It's more or less a rebirth revenge novel as MC tries to dig out a never ending conspiracy aimed at his family. MC used to be an arrogant young master who conflicted with his family until the rug was pulled and he spent years getting revenge before traveling back in time to where it started to unravel. While he puts on the same carefree air, it contrasts with his immense paranoia. I do enjoy an MC worn down by life and trying desperately to protect what... more>> he can. While MC is smart and very scheming, it's not without a price and I liked that this novel shows that. There's so much to do and MC runs himself ragged trying. The future MC lives very much impacts him psychologically and I'm glad this novel addressed that. The family dynamics were also interesting. MC very much doesn't get along with his family and even post rebirth it doesn't change easily. He has to actively try and they also have to try on their behalf. There's no magical overnight change (well except MC but rebirth so) and both sides have to re-evaluate and reform. Romance- I did quite like it. ML is a pretty good ML who loves and helps MC a lot. I generally liked their romance except for a bit in the fanwai but otherwise it's fun to watch build up. MC definitely has some hand fixation haha <<less
6 Likes · Like Permalink | Report

4.5 lots of scheming, mystery and drama, but what I found most interesting was the human side of the story; the MC is as flawed as the rest of us and as fallible. His reactions to the past are relatable and he's not some all-knowing OP character face-slapping left and right. He shoulders everything and runs himself ragged trying to make sure the past doesn't happen again. The ML is OK, he bends over backwards for the MC and doesn't call him little bunny or treat him like he's 5. I also... more>> like how supportive and concerned the ML his immediate family is, instead of the usual infighting and back biting that's often prevalent in these kinds of stories.
Spoiler

I love that this story addresses the treatment of mental illness in a factual and compassionate way without blaming the MC, though I think he has some serious PTSD, rather than a generalized anxiety disorder.

Very meticulous and detailed plot, with an amazing MC with 3d side characters and their complex interrelationships. ... more>>
Spoiler
[collapse]
Spoiler

Considering the romance part, it was slow burn, and satisfying. It was how ML and MC got along from hi hello acquaintances to friends to lovers. And their chemistry and interactions always carried a subtle spark and serial tension with a sense of comfort and romanticism as many a times they silently accompanied eachother.

Well it’s a good story with great suspense. Ive read hundreds of rebirth stories but have never read such an realistic portrayal of a MC who gets a second chance. MC felt like a normal person than a character of a book.... more>> plus it kept me going cuz unlike other novels I have read so far, I really could not even guess who the real antagonist was, which was extremely rare for someone who had read too many Chinese BL. I mean I guessed many times, but was always wrong. So, overall it’s a very good story, the plot was good, had many thrilling moments. <<less
1 Likes · Like Permalink | Report

This turned out to be a very good read. You get the satisfaction of watching the MC being in control of the situation without it becoming a random op protag faceslapping others saga. The MC is not a genius or op or anything of the sort. He was originally just an immature short tempered guy who had to step up and bear the burdens and loneliness that followed after his family's deaths. The 10 yrs he spent getting back up on his own has made him pretty damn good at... more>> "scheming" and also extremely careful and a lil paranoid (pretty justified I would say). One thing about this novel that I found different compared to others is how the mc's relationship with his family is handled. His relationship with his family had always been very strained ever since his high school days. Constant fights, lack of proper communication because the MC and his father n brother are stubborn and prideful as hell etc. This doesnt just magically change after rebirth. He tries to reign in his temper and avoid quarrells but MC spent too long not knowing how to get along with his family. The same goes for his father and bro. So he doesnt turn into the "clingy loving child of the family" that we normally see in rebirth stories. The tragedies of his past life and the problems in his relationship with his family still weighs on him and it takes a lot of time and effort from both the MC and his family for things to slowly get better. (All of them are nice ppl. They care about each other a lot. It just never translated well to the other bcoz well why communicate when u can quarrel 🤷. It gets better though). ooh and also, the ML does not follow the "coldfaced president who is even more op than the mc" trope. The ML is a researcher so he is initially not directly involved in most of the business war mess. He helps based on his capacity using the connections of his family and friends but its still the MC and his family's fight. <<less
1 Likes · Like Permalink | Report

I felt really really bad for the MC’s past life like he really had no one with him like ML was there to help but he disappeared too and MC didnt even realize his feelings for him before he left and he just supressed his feelings after he left...

When he rebirthed too, I felt bad for him. Although he did have a new life and changed his past but he was still so trapped that I just cried for him. I loved his outburst when confronting his family. I know they wouldnt believe it but atleast he got to say it?? Anyways. Fortunately his family is with him now, fortunately his love can accompany him in this life.

Ugh the extras about the parallel universe where ML didnt die was so bittersweet. When MC asked “It would look ugly if you put a wedding ring on it.” (something along these lines cuz his left hand had a big scar) really just broke me. He was so insecure and I’m glad ML was there for him.

Love this story so much and the other works of the author! It mainly involves schemes and conspiracies. Very well written and realistic in approach. The romance is not much; the ML serves as beacon for MC due to his extreme anxiety. The MC thought he was a broom star that caused all the death of his family. He thought he avenged them in the last life. Fortunately, he returned to his young self (18y/o). He slowly uncovered the past. He schemed to protect his family while acting like a waste... more>> 2nd generation. Unfortunately, he experienced mental problems, since he really didn't want the past to repeat itself and he shouldered most of problems. He was right, his family really wouldn't believe him and didn't believe him when he said the truth. Completed the main story and cohabitation extra. The parallel world in past life is still on going until today <<less
1 Likes · Like Permalink | Report

This is a revenge-driven and family-oriented novel. There is not much BL until the latter half. It has a very clear and logical progression of events. The past and present life was wonderfully intertwined with the present knowledge and discovered secrets. The schemes and conspiracies were well-written.
Spoiler

I love how the MC has psychological problems. It is very reasonable after what he went through.