Novel Updates
RegisterLogin
Theme
Search
Your changes has been saved.
Advertisements
Let’s Raise the Abandoned Cat Heroes – an Awesome Demon Hunter Who Switched to Being a Teacher, and Is Very Much Missed by His S-Ranked Pupils

Home >
Novel >
Let’s Raise the Abandoned Cat Heroes – an Awesome Demon Hunter Who Switched to Being a Teacher, and Is Very Much Missed by His S-Ranked Pupils 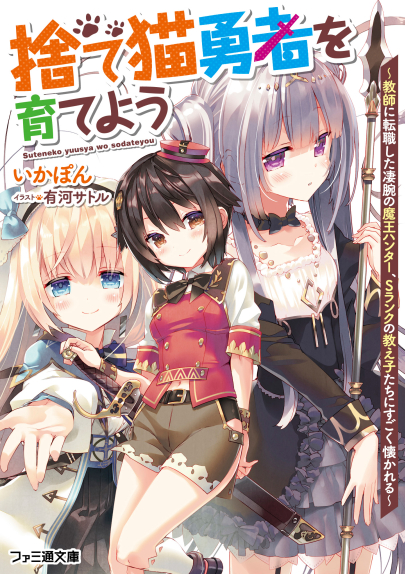 Status in Country of Origin. One entry per line
131 Chapters (Ongoing)

Brett, a teacher at the Hero’s Academy, was once known as a brilliant and brave man in the past. One day, he is abruptly framed as an abusive teacher by Cyrus, an important figure in heroic society, and is exiled from the capital. When he arrives in a remote village by carriage, he finds a small, run down, nameless hut. Brett would soon come to learn that this unassuming hut is the Hero’s Academy for the village.

At this academy, Brett encounters three girls, who were dressed in rags and looked like abandoned cats, having experienced a series of misfortunes. He feeds them out of pity, saying he can’t leave such unfortunate children alone. When he feeds them, the three girls, who had been wary of him at first, start to take a liking to him. These girls are the heroes that Brett needs to raise, and they are all S-ranked children.

Brett, now a teacher at this remote heroic academy, teaches his students skills and magic, whilst going on adventures with them to exterminate demon kings.

These are recommendation lists which contains Let’s Raise the Abandoned Cat Heroes – an Awesome Demon Hunter Who Switched to Being a Teacher, and Is Very Much Missed by His S-Ranked Pupils. You should give them a visit if you're looking for similar novels to read. Alternatively, you can also create your own list.
N/A

You'll prob like it if u like these cringe isekai + harem -2 of the most harsh negative genres due to the vast majority being bad (like this one..) - novels. I was tempted to give this a 2, but I mean it wasnt exactly horrible, and this book's rating is already pretty low for this site being at a 3.4 currently. Biggest negative of this novel is the characters, espicially the MC. The MC is one of those cliche Japanese characters who is a braindead idiot in relations turning... more>> a blind eye on the girls loving him, which I dont hate, but with the 2 negative genres already being there and with the way the book is written which ignores plot, suspence, and tension, in turn heavily focusing on harem and isekai with ok writing, it makes a triple deadly dose of uaghhh 😱😵. Maybe not necessarily the author, but at least the translated story is subpar writing. Not many descriptions making it somewhat boring. Female chars personalitirs are also forced, though again, not surprising for a harem novel... The 3 FLs or at least that are shown so far are lolis, so if u got a weird fetish and need personal help but are avoiding help, then read this since. The storys only plot is really revenge on a teacher of the academy, though MC doesnt care 1bit typical of an isekai even when he was outcasted from the capital and into a abandoned small village. Enemies also seem braindead. Actually I guess Im a rate this a 2. MC is a teacher and 3 FL lolis are genius students who dont need teaching in turn making this novel really nothing about teaching even though thats what the story is. Anyways again the book is OK, if u r a new reader than u can give it a try if u like these things, BUT if u read a lot like me on the otherhand, then skip this book, yourwelcome. <<less
3 Likes · Like Permalink | Report

Just wanted to add one thing. Looking on pictures you might think that MC is going to do something bad with lolis.... But that's not true in the story you see that they are not really kids. Even age gap is bearable. Overall story is pretty much standard but well done. So I recommend checking it when you just want to relax
1 Likes · Like Permalink | Report

It's my first time reviewing a novel, so I'm not much sure of how to review. This story is the epitome of what all the lolicons should read. Here, the MC is another dense idiot but it makes it all the more amusing. There are 3 op lolis which are trained by an op lolicon for a certain bet. This story have so much potential and I'm looking forward to it.
5 Likes · Like Permalink | Report
Leave a Review (Guidelines)
You must be logged in to rate and post a review. Register an account to get started.